Ameraucana Hen Vs. Rooster: How To Tell The Difference

Originally a descendant of the Araucana chicken, the Ameraucana was bred to fix a few health flaws their predecessors suffered from, such as ear tuftedness.

Over the years, modern farmers and hatcheries have referred to Easter Eggers as “Americanas” or by other various spellings.

But, today we’re looking at true Ameraucana’s, in all of their glory.

If you’re lucky enough to raise Ameraucanas or Ameraucana chicks, you may be wondering if you’ve got yourself hens or roosters. Or, you may just be curious about these beautiful creatures.

Here are all the main differences between Ameraucana hens and roosters, from adults to younger ages to baby chicks, plus what behaviors you can expect from them at different ages! 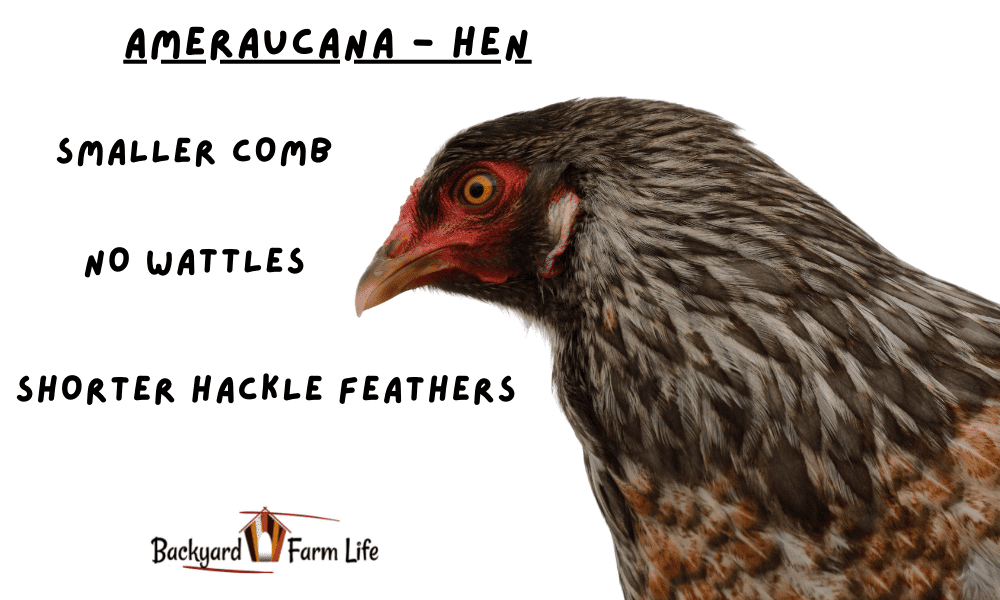 Ameraucanas are truly beautiful backyard chooks to raise. Not only are they one of the few birds that naturally lay blueish greenish colored eggs, but their plumage is spectacular, having very pronounced muffs and beards.

Although there are some obvious differences between the hens and roosters of Ameraucanas, such as their size, crest, and comb, there are also some more subtle ones too.

These subtle differences appear at different ages as the chickens grow, and include things like their beards and muffs, their hackle feathers, and differences in behavior.

The Ameraucana chicken is considered a medium fowl, mainly because it isn’t as heavy as many other breeds, like Buff Orpington for example. As a result, backyard farmers almost exclusively use them for their eggs instead of as broiler chickens.

However, this size difference isn’t too noticeable until they’re fully matured, and after about 12 months of the chicken’s life.

The color of Ameraucana’s vary significantly, but both hens and roosters can generally be the same base color.

These colors vary from black, brown, blue, and white, but they can also be silver, red, and in rare cases, buff or blue wheaten.

Although both Ameraucana hens and roosters can be of these colors, it’s more likely that roosters will develop different colored hackles or beards than the rest of their body, compared to the likelihood hens will!

The plumage of Ameraucanas is very unique. In fact, most hens don’t even have combs at all!

Instead, their beards and muffs are quite compact, with barely a little red pea of a comb on top.

Still, even though it’s still very small, Ameraucana roosters do have a more prominent comb, which starts to develop much earlier than Ameraucana hens and is a vibrant red, much like other chicken breeds.

However, one tell-tale sign of an Ameraucana rooster compared to an Ameraucana hen, is the length and volume of their hackles, the feathers on their neck.

It’s because of their plumage that Ameraucana roosters are often raised as show birds.

For more chickens with amazing plumage and hair-do’s, check out Afro-Chickens, Polish hens vs. roosters, or our beloved Silkie hens and roosters.

Ameraucanas don’t shy away from humans. They’re friendly, laid back, with curious souls and docile temperaments.

This can be said for both the roosters and hens. Although, just like with most other chicken breeds, Ameraucana roosters can be a bit more protective and territorial at times.

Nonetheless, so long as you build trust and get your rooster to like you, you will rarely see aggression towards humans.

Of course, when it comes to telling an Ameraucana hen from a rooster, from about 12 weeks old you’ll see clear alpha behavior coming from roosters. This includes rounding up hens, leading the flock, and sometimes, telling them off!

From 12-16 weeks, you’ll notice that roosters more often walk around with their chest puffed out too, whereas hens tend to stay closer to the ground.

As well as this, at 6 months old, you’ll start to see some very clear signs that you’ve got yourself an Ameraucana hen or rooster. That is, by hens reaching the point of first lay, and when the roos will begin to crow.

When Do Ameraucana Roosters Start Crowing?

In line with most other standard chicken breeds, like ISA Brown roosters, or Rhode Island Red roosters, the Ameraucana rooster will begin their first crows from about 6 months.

You may see them finding their voice a bit earlier, but you can expect to hear some full-blown rooster crowing coming from your roosters at this time.

Ameraucana hens can squawk loudly too, but it won’t be as distinct as a roosters wake-up crow!

When Do Ameraucana Hens Start Laying? 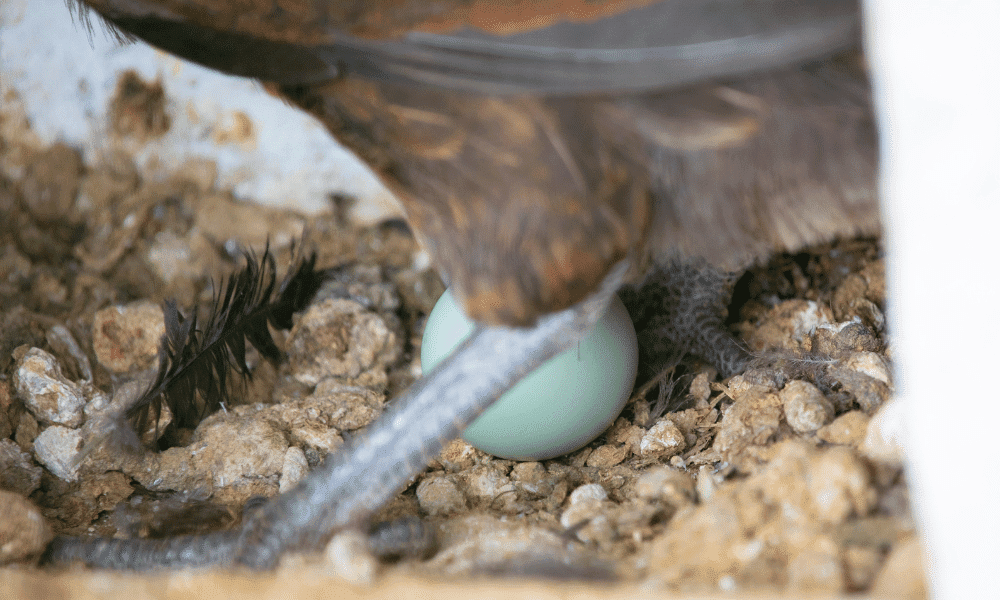 Around the same time Ameraucana roosters will start crowing, Ameraucana hens will begin laying. This is because it’s about the time when an Ameraucana is considered to be matured.

Ameraucana hens will start laying their eggs anywhere from about 6-7 months old, give or take a few weeks. This is much earlier than some breeds, such as Silkies or Polish hens, but a little later than your egg-laying hybrids like Cinnamon Queens or Golden Comets.

The stand-out feature of Ameraucana hens though, is that they lay blue or light green eggs! This is why Ameraucanas and Araucanas, and their crossbreeds, are referred to as “Easter Eggers”. 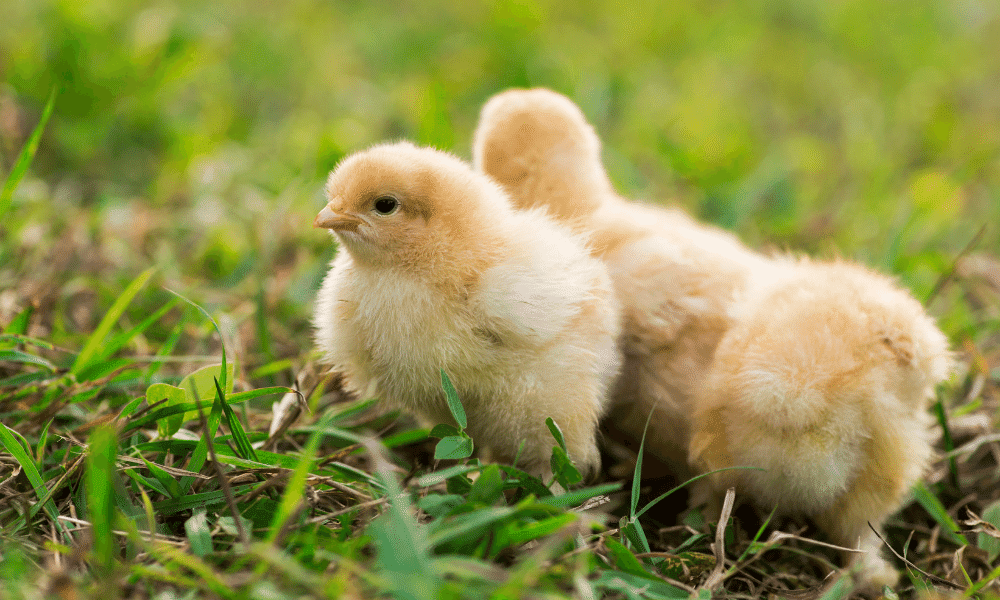 The age of your Ameraucana baby chicks plays a big part in which key signs to look at to determine whether it’s a male or female.

You can try, but really it will be a guess based on your instincts — though it’s always fun to do.

From 6-8 weeks old, you will begin seeing small signs that you can use to piece together whether your Ameraucana chick is a male or female.

Although it’s not fool-proof at this age, generally males will begin to grow out small red wattles, and a small red pea-shaped comb.

On the other hand, Ameraucana hens at this age will show no signs of wattles or combs!

From 12+ weeks, Ameraucana’s will normally have their full set of adult feathers growing in. This means you can look at the hackle plumage as another tell-tale sign.

The roosters’ hackle feathers, on their neck, will be much larger and more pronounced. Moreover, they grow longer and pointier.

A hen’s hackle feathers will remain short, and more rounded.

If you’ve got yourself some 6-7-month-old Ameraucana chickens, you should be able to tell the hens from the roosters by their egg-laying (hens) or crowing (and lack of egg-laying; roosters).

Differentiating between the Ameraucana rooster vs. hen is rather simple at an adult age. Ameraucana roosters will have much bigger wattles and combs, and much longer, pointier, and more pronounced hackle feathers. They will also act much more entitled!

However, telling male and female Ameraucana baby chicks apart can be quite challenging, especially when they are under the age of 6 weeks.

From 6-8 weeks old, you’ll get your first signs of wattle and comb growth on males, and from 12+ weeks, their hackles and size will start giving them away.

18 thoughts on “Ameraucana Hen Vs. Rooster: How To Tell The Difference”