Nobody loves a good feed more than a chicken. Consuming almost everything in their path, always seeming hungry, and always ready for treats.

But, as we all know, as our chickens grow from baby chicks to pullets to laying hens, their dietary requirements change. From chick starter to grower feed, eventually to layer feed.

For those that are raising baby chicks alongside their mother hens, you may have seen your older chickens eating your baby chicks’ food!

This begs the question: is it OK for adult chickens to eat chick food or chick starter?

A Quick Word About A Chickens Diet

It’s no secret that an adult chicken requires a diet that optimizes for their required protein and calcium intake for regular egg production, overall health, and wellbeing.

In the same way, a baby chick’s diet should optimize for healthy growth and development, rather than for egg-laying.

This is why it’s highly essential to feed your chickens a diet that’s optimized for their age. One that accounts for how the nutrients they need for each stage of life.

In terms of calcium requirements, laying hens require roughly 4-5 grams per day and younger chicks only need about half of this. 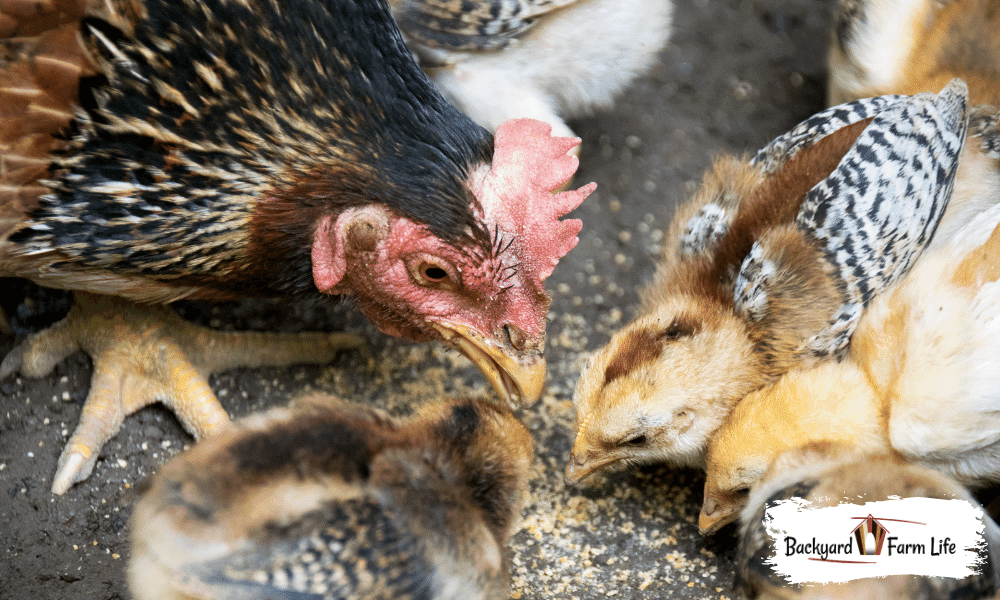 When we talk about whether an adult chicken should eat chick food, the main thing we want to look at is the nutritional content of the chick starter feed.

You see chick starter is incredibly rich in protein, containing up to 20-22% protein levels. It also has much less calcium in it, as baby chicks don’t need as much as adult laying hens.

So, adult chickens that eat chick starter will receive a higher protein content than they really need, but also much less calcium.

This can have an overall impact on their egg production and egg-shell formation, laying soft-shell eggs or even liquid eggs.

Therefore, although it’s safe for adult chickens to eat a bit of chick starter here and there, it should never replace their normal layer feed. Chick starter feed simply doesn’t offer them enough calcium and other nutrients fit for their diets.

One, is it safe for laying hens to consume? And two, is it safe to eat a hen’s eggs if they’ve consumed medicated feed?

As a general rule of thumb, you should NOT allow laying hens to eat medicated chick starter if they don’t need to be medicated.

But, laying hens that consume a small amount of medicated chick starters will normally be completely OK.

In terms of the latter, regarding eating a chicken’s egg who has consumed medicated feed, well it all comes down to what kind of medicated feed they’ve eaten.

If in doubt, it’s best not to consume their eggs without first checking with a veterinarian who is able to assess what type of medicated feed you actually have. 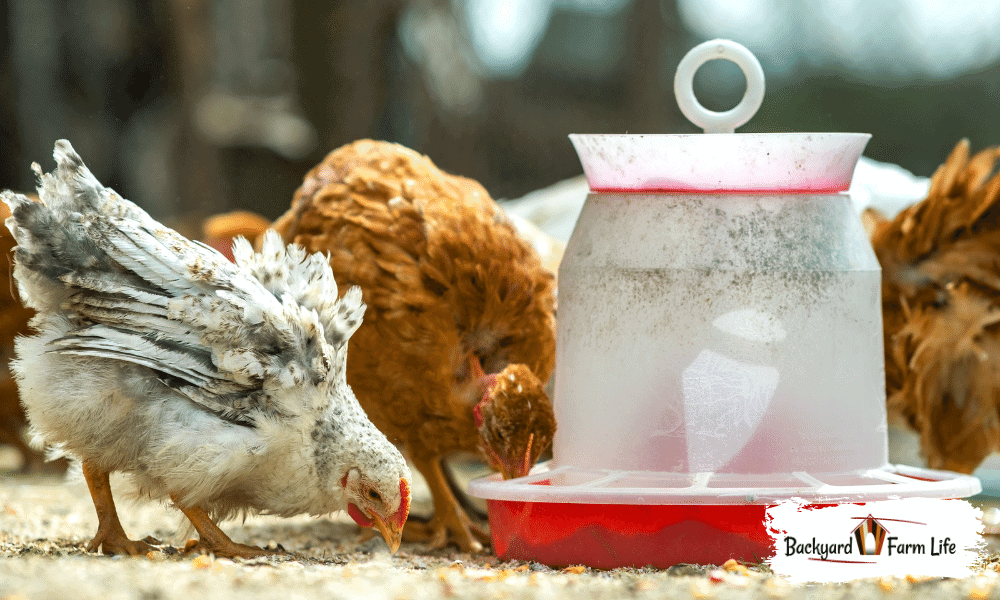 You’re either raising pullets alongside older chickens or you accidentally bought grower feed at the store instead of layer feed!

When we take a look at the nutritional content of grower feed, it normally offers about 17% crude protein, very similar to what a laying hen needs too!

Grower feed naturally contains a little less calcium, as generally younger chickens who aren’t laying don’t require as much for continuous egg production. But all in all, it’s completely safe for adult chickens to consume.

Still, it’s not optimal, but it will still offer them all the nutrients they would require otherwise. Just ensure they are eating enough calcium, you may even want to feed them some calcium-filled supplements like scrambled eggs with their eggshells too!

If you raise a mixed flock of roosters and hens, you’ll know that it’s challenging to feed them separately.

In general, a rooster’s main diet should come from flock raiser, as it consists of enough protein and nutrients, without going overboard on the calcium that laying hens require.

On the other hand, it is safe for roosters to eat layer feed, and a little bit of chick starter won’t hurt either.

Nonetheless, there’s no point going out of your way to feed a rooster chick starter food as it simply doesn’t offer your rooster their optimal intake of macro and micronutriental needs.

Still, it’s completely OK for adult chickens to eat a bit of chick starter. Let’s face it if you’re raising baby chicks with their mother hen then it’s pretty much inevitable.

But, you should make a conscious effort to ensure your adult chickens primarily eat their normal layer feed!

After all, paying extra attention to a chicken’s dietary needs as they grow will go a long way for their overall development, health, and wellbeing!