Can Cat’s And Chickens Get Along?

For those that love a lively backyard, bringing a new pet or animal to the household can be incredibly invigorating.

But, there’s always that shade of concern in the back of your mind, hoping that all of your backyard animals will get along nicely! I mean, some animals are rather timid and will get along with just about anything, but others, like cats, can sometimes be a little unpredictable.

Here we go through whether cats and chickens can get along, how to encourage friendly behaviors, and whether domestic cats will really try to hurt chickens.

Can Cats And Chickens Get Along?

A lot of assumptions get made when people think that cats and chickens can’t live in harmony together. Although cats do have hunting instincts, they are capable of getting along with many other animals when they are raised with them, including chickens!

This can be said for chickens behaving themselves around cats too. Although some chickens may be a bit more afraid of cats, some chickens which are used to the company of cats will get very close, and it’s possible they can even become companions!

Besides, if your cat ends up getting a bit too close to your chickens they will be told off, as chickens are actually quite capable of defending themselves against cats and other small animals, like snakes or even spiders.

Usually, the only reason that you would see cats and chickens not getting along would be if you owned a cat already and you introduced them to some new chickens or even vice versa. In this instance, your cats are more likely to act unfriendly to your chickens, whether they chase them or they arch their backs!

So, cats and chickens can get along so long as they have been raised together or are familiar with the other’s company. Still, in my experience chickens for the most part will avoid cats, but the cat won’t be bothered by any of the chickens, even my bantam silkies!

As a bonus, cats will also help keep rodents at bay, as they not only hunt them but their scent is a natural deterrent!

Can Cats And Roosters Get Along?

So cats and chickens are capable of companionship, or will at least tolerate each other in the backyard over time. But, the same cannot be said so easily for roosters.

Of course, there are exceptions to the rule for hens too, as some will naturally be more aggressive or defensive against cats. However, it’s much more likely that your rooster will actively chase away or become aggressive to your cat.

If you’ve raised the rooster from a baby chick and it’s been in the company of cats for its life then there is a chance they will be OK. But again, roosters and cats, in general, are less likely to get along.

How To Help Your Cat And Chickens Get Along

So, if you’re considering owning both cats and chickens then you may be wondering how on earth you’re going to get them to get along with each other. Particularly during their first interactions, it’s almost like anything can happen!

Well. You’re in luck. Here are four steps to helping your cats and chickens get along, from the first interaction to ongoing encouragement:

It’s important to call out that it’s much easier to introduce a new cat or kitten to an existing flock, as your cat will learn early that chickens aren’t to be messed with.

As a final note too, not all cats and chickens will get along, that’s just the way nature is. For this reason, if you notice your cat is always aggressive toward your chickens or vice versa, you should take the appropriate steps to keep them separated.

Will A Pet Cat Attack Chickens?

If you’re considering raising a pet cat and chickens together yourself then one of your biggest concerns would be that your cat may attack and even kill your chickens. It’s completely fair to wonder because after all, you want all your animals to be safe at the end of the day.

The honest truth is that your pet cat is entirely capable of attacking chickens, but it’s much more unlikely than you think. First of all, chickens do a decent job at defending themselves, particularly because most pet cats wouldn’t commit to trying to harm the chicken, and are merely just curious or playing.

As soon as a pet cat gets a firm warning peck from a chicken, they usually back off and tend to remember the experience for next time! Nonetheless, you have to be prepared for conflict. Being prepared and taking the necessary steps to introduce your pet cat and chickens slowly can be the difference between companionship and hostility.

Even experienced owners of chickens and cats may get the occasional thought going through their mind that their cat is capable of attacking or harming their chickens, but the longer they live together the less likely this would ever come about.

Will My Cat Attack Baby Chicks? 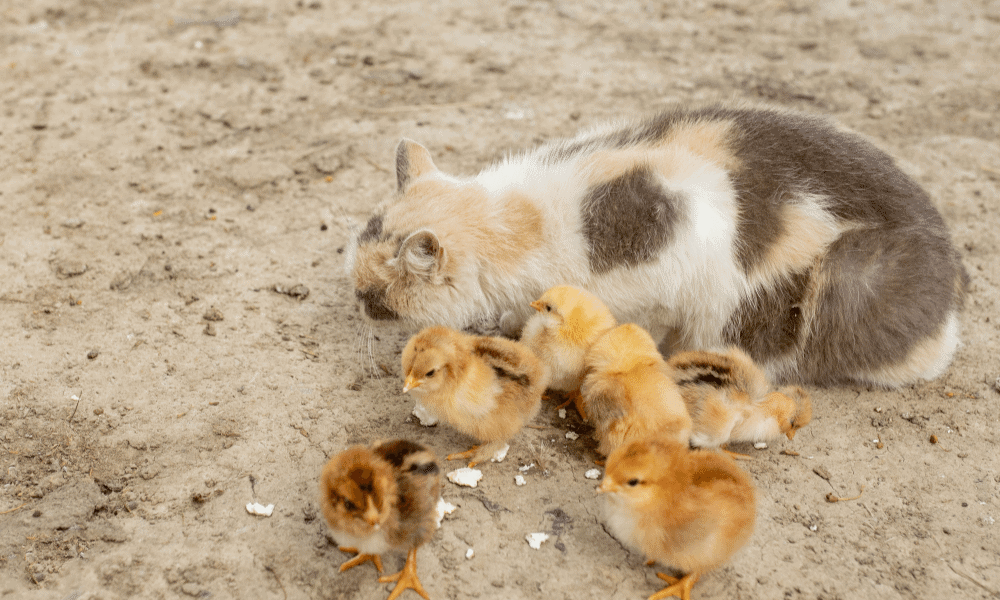 Although a lot of cat owners will trust their cat around their chickens, much more caution should be taken when allowing cat’s around baby chicks.

This is more to lean on the side of caution, as baby chicks are so vulnerable until their at least 12+ weeks old. Even if your cat isn’t intending to harm a baby chick when they interact it’s way more likely.

For this reason, it’s recommended to never leave your cat with your baby chicks – just to be safe. However, there are reports and evidence of cats and baby chicks getting along, and even cat’s literally taking care of the baby chicks as if they were their own babies!

It’s incredibly adorable to see, but it should only be done when you can say for certain that your cat would never harm your baby chicks.

Initially, it’s easy to think that cats wouldn’t get along with chickens, as some cats are known to catch birds all the time. However, chickens are much bigger than most birds cats catch. Plus, chickens are quite capable of discouraging domestic pet cats to get too close. Even bantam chickens like silkies are able to tell them to keep their distance.

Nonetheless, you should always take care when introducing a new cat to your flock, or introducing chickens to your existing house cat. Take slow steps, and allow them to get to know each other while both in safe environments.

The easiest way to start with is keeping your chickens in their run, and allowing your cat to inspect them through the fence or wire.