I go through enough coffee to fuel a whole workforce at the local Tractor Supply, believe me.

But, I can tell you for a fact that I do NOT want to see my chickens on coffee, they are chaotic enough as it is!

Although the idea sounds harmless enough, coffee grounds, or coffee in any form may actually be very harmful to chickens. So if you use coffee grounds in your garden you may want to think again.

Here’s whether chickens can eat coffee grounds, coffee in any other forms, what, the potential risks, and caffeine’s effects on chickens. 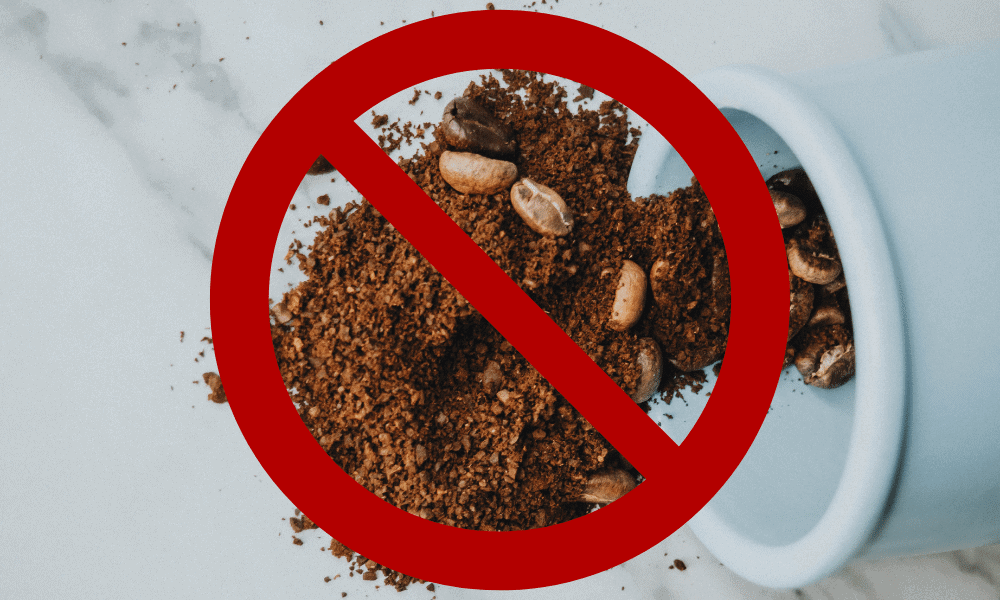 I know chickens will eat anything, and I’m continuously surprised at just what these things would ingest.

I’m almost certain that a chicken would try to eat coffee grounds. But, the truth of the matter is, that chickens should not consume coffee in any way, shape, or form, including coffee grounds!

Although the coffee bean itself isn’t harmful to chickens, the caffeine in the coffee certainly can be. This means you generally avoid any foods with high caffeine, including coffee grounds.

It’s not likely your chickens will stumble across any coffee lying around, but it’s still good to be cautious.

Is Caffeine Bad for Chickens?

So, the leading reason why chickens should not eat coffee, coffee beans, or coffee grounds, is due to the high caffeine content.

This is because caffeine has numerous health risks to chickens, and has been shown to interfere with the functioning of the chickens:

The problem is that caffeine is a form of a chemical compound known as methylxanthine. Within one hour or so of consuming this compound, a chicken will begin to show signs of toxicity.

Plus, caffeine affects calcium absorption rates in chickens, which may lead to weak bones and the production of fragile eggshells, soft eggs, or even liquid eggs.

Although it’s unlikely your chickens will suffer anything fatal immediately, the negative impact it has on the many health functions of a chicken could cause chickens suffering from ongoing caffeine toxicity to eventually die.

However, any low level of caffeine is thought to be OK, many backyard farmers feed diluted tea to their chickens for example.

How To Tell If A Chicken Has Caffeine Toxicity

If you think your chicken has actually ingested coffee grounds or anything other high caffeine food for that matter, don’t worry. It’s unlikely they will have had enough of it to cause any immediate, serious harm.

Nonetheless, if you’re a bit worried your chicken has caffeine toxicity, here are some of the symptoms they may show:

Keep in mind that the intensity of these symptoms can vary depending on the amount of caffeine that a chicken has consumed. If it’s only a couple of pecks, your chicken will likely show only very mild symptoms, if any at all.

But, if your chicken has been eating coffee grounds, or high caffeine foods for extended periods of time then it’s likely you’ll notice some of the above symptoms.

You might think that since coffee beans are rather natural, chickens could eat them without harm.

Again, it’s not that the coffee itself is harmful, but the high caffeine content certainly is!

Don’t be tempted to give your chickens a few coffee beans as a treat, although in small doses it may be harmless, it’s certainly not considered healthy, and may cause mild cases of caffeine toxicity.

Can Chickens Have Instant Coffee

As we now know, chickens should not eat coffee at all. It’s simply not worth the risk.

When it comes to instant coffee, it’s probably the worst form of coffee a chicken could have. Simply because it will have been manufactured, losing most of its natural nutrients, and is pretty much just left with the caffeine content which is toxic to chickens.

I have never heard of anyone giving their chickens instant coffee, and I hope I never do!

How to Keep My Chickens From Consuming Coffee

By now, we’re positive you won’t give coffee in any form to your chickens on purpose. Plus, it’s very unlikely they will come across it by accident either!

Still, stranger things have happened. Here are a few ways coffee might make its way into your backyard by accident, and how you can take steps to avoid this:.

It’s funny, you hear about chickens eating all sorts of nasty things and being completely OK, so you would think that coffee grounds would be completely harmless to chickens.

Many backyard farmers use coffee grounds for pest deterrents or for soil quality, but if you own chickens it’s simply not worth the risk.

The other minerals and compounds in coffee would be OK for chickens, but the high caffeine content can cause caffeine toxicity, so it certainly should be avoided.