A few decades ago, flax seeds became all the rage in health food fads. That’s because they’re a good source of omega-3, they contain admirable amounts of protein, plus a bunch of other high-quality nutrients. Not to mention that they can be fairly easy to source!

It’s not surprising then that many poultry breeders or chicken enthusiasts are asking the question: can chickens eat flax seeds? The answer is absolutely YES, but it’s important to know how much you can feed them and what to look out for. Let’s look at whether chickens can eat flax seeds, what nutritional benefits it has for their wellbeing, and any concerns.

Flax seeds are among the healthy food choices for chickens. In fact, many breeders encourage the practice of adding it to the feeds as frequently as possible. Some commercial chicken feed does also come with raw flax seed in the mix. The usual amount is up to 10% of the feed, as anything more than 15% or so tends to change the taste of eggs and the flax seed taste comes out in the meat.

There are many ways that flax seeds can be incorporated into the chickens’ feeds. It can be added in its raw form, cooked with other ingredients, or crushed into ground flax and baked into treats, all have their various benefits and it’s completely up to you — your chickens won’t be complaining about what form it comes in!

Chickens are known to be able to eat most anything and will try to eat everything! When it comes to flax seed it’s no different either.

If you’re feeding your chickens whole flax seeds don’t worry. Once the seeds move from the crop to the gizzards they will easily break down and release their nutrients for the chickens to absorb.

It’s actually more nutritional to feed your chickens whole flax seeds over ground or crushed flaxseed or flaxseed oil. This is because as soon as you break the seeds the nutrients are released. If you are grinding or breaking down your own flax seeds for your chickens try to keep them as fresh as possible.

The Nutritional Benefit of Flax Seeds for Chickens

Flax seeds contain various nutrients that are mostly good for general health, they’re believed to provide protection from free radicals, and they were observed to improve circulation. Flax seeds aren’t known to be unhealthy for chickens at all and won’t impact egg production at normal levels. But, if they consume too much it can change the flavor of the eggs.

A tablespoon of flax seeds contains the following healthy substances:

These are clearly quite beneficial for the growth and wellbeing of chickens. The omega 3 fatty acid actually enriches the egg yolk. In addition, the caloric value of this quantity is barely 37, which means that it’s not a fattening food by any measure. Therefore you can feel confident in adding flax seeds to your chicken feed or providing them as safe table scraps.

Unfortunately, flaxseed has the unpleasant habit of going rancid pretty quickly. That’s why it’s always recommended to keep flax seeds in non-reactive containers inside dark cupboards. You can also significantly cut down oxidation by keeping them in their whole seed form rather than keeping them crushed or ground.

Giving the chickens whole flax seeds is also better than grinding them to minimize this oxidative effect. Chickens have gizzards inside their digestive systems, so they can handle the seeds well.

Some of my practical experiences with adding flax seeds to chickens’ feed showed that some of my chickens threw away the seeds out of their meals or weren’t interested when I scattered them in the yard.

At first, I noticed my yard would be studded with flax seeds after the feeds. And that gave the impression that these chickens didn’t fancy the taste of flax seeds all that much. Interestingly, a bunch of my chickens would return later on and eat up the seeds. Some ended up loving them profusely.

There are many other successful feedings, and the picky behavior remains the exception to the rule. Although chickens aren’t fussy, they will all have different taste preferences, and most of them will eat flax seeds.

I’m sure all of us chicken lovers get a feeling of satisfaction when they add extra nutritious foods into the chickens’ meals. There’s always the assumption that these good foods will help the health and wellbeing of our chickens, as well as help with egg production, taste, and flavor.

The actual utilization of flax seeds isn’t thoroughly studied though. For the time being, the latest consensus is that its omega-3 content is good for the chickens and eventually the consumers.

Some breeders suggest adding an animal source of omega-3, like fish oil, instead. But that too isn’t supported by hard evidence.

To take a balanced approach it’s best to simply add a handful of flax seeds to their mix, scatter them throughout the backyard for foraging, or by adding them to a nice fruit and vege mix. Try adding root vegetables for your chickens like radish or beetroot.

Other Seeds You Can Feed Your Chickens 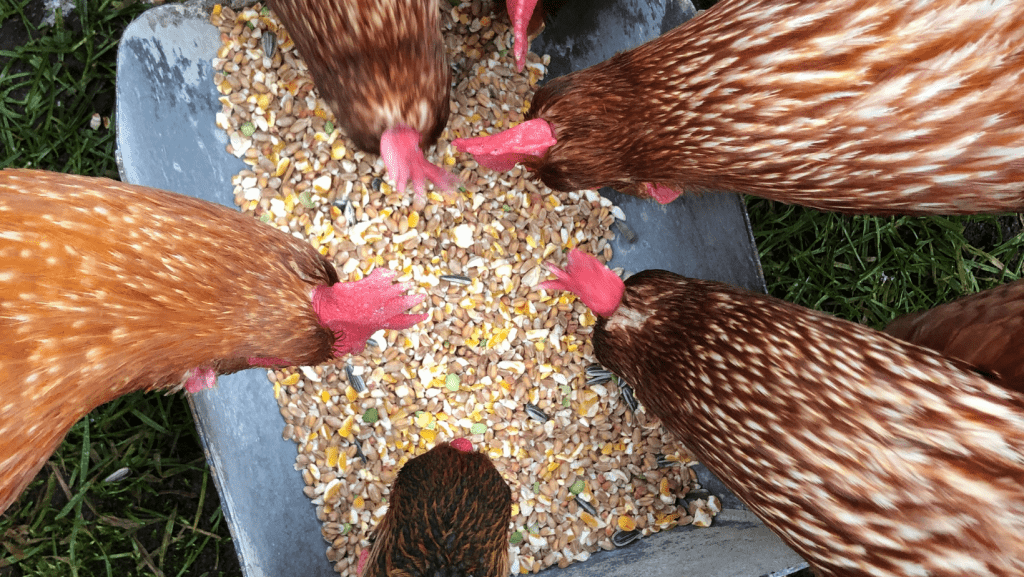 Aside from flax seed, you can safely feed your chickens:

If you’ve got extra flax seed lying around, or even if you grow your own flax and want to utilize the seed yield, it’s absolutely worth it to add it to your chicken’s diet. Flax seed is completely safe to feed your chickens and is packed with nutrients for a healthy and happy chicken. Just like most foods, feeding them in moderation is the best approach, particularly because too much flax seed can cause the flavor to come out in the eggs or meat.