Let’s all be honest for a second. There are countless times where we as chicken owners have either run out of chicken feed or have approached concernedly low levels!

It’s in these times where we need to become resourceful, usually making a meal or two from our grains, seeds, vegetables, and fruits we have around the home.

If you own goats as well as chickens, you’ll know some of your chickens get curious about what’s in the goat’s bowl or trough.

So, whether you’ve got excess goat feed, or you’ve just seen your chickens eating some goat feed, we’ve got you covered. Here we go through whether chickens can eat goat feed, if it’s actually healthy for your chickens, and what you need to be aware of.

There are really only two reasons you’d be curious if your chickens eat goat feed. One, because you’ve seen your chickens eating some themselves. Or two, you’ve run out of chicken feed and are wondering what you can use as a supplement for the next day or so until you get more.

Well, if you’ve got goat pellet feed then you’re out of luck, as these pellets are often just a bit too big for a chicken to find appetizing. Plus goat feed pellets can affect a chicken’s digestive system, so they should be avoided when possible.

However, there are also many goat feeds that are predominantly grains or hay.  In this case, your chickens won’t have a problem picking out the grains, muesli, cereals, and hay that they like!

So, chickens can eat goat feed if it’s a grain mix, but only in small amounts or as a once-off meal rather than a replacement for their normal diet. Although a goat feed contains grains such as barley, rye, wheat, and corn, and chickens can eat hay too, it simply doesn’t offer the exact requirements a laying hen needs to stay healthy.

Goat feeds are normally between 12-14% protein, whereas a chicken requires between 16-18% protein in their regular diet in order to produce eggs, help them through any molting cycles, and stay warm throughout the winter.

So, although chickens can eat goat feed, you shouldn’t make it a habit as it doesn’t cater to everything a chicken needs to be a happy and healthy chook. This is the general consensus for many other animal feeds, such as all stock feed or game bird feed too.

Is Goat Feed Healthy For Chickens? 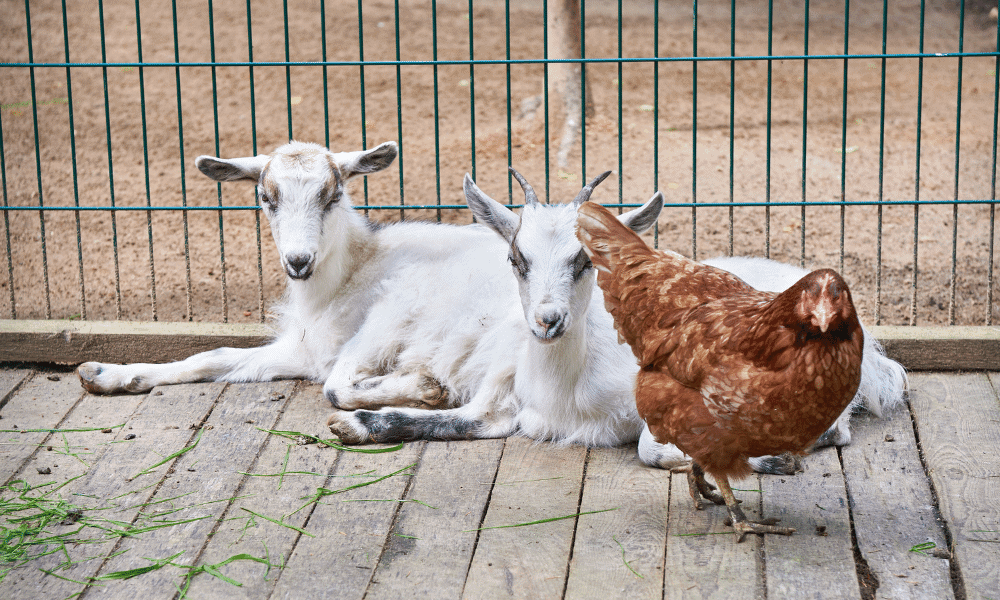 Goat feed as a whole isn’t considered healthy for chickens, but there are some ingredients within the goat feed that are certainly nutritious and beneficial for chickens to eat, so long as it’s in moderation.

These include almost all of the grains, seeds, oats, and alfalfa that are in goat feed. However, since chickens will eat just about anything that’s put in front of them, it’s harder to establish exactly what’s healthy for a chicken, and what is just OK.

Because of this, it’s always best to take a conservative approach and ensure your chickens are consuming roughly 90% of their daily diet from a specially formulated chicken seed mix, or layer pellet mix if you prefer.

With that said, the other 10% of your chicken’s diet can be made up from their foraging runs, other safe table scraps, or even foods like goat feed.

What To Be Aware Of When Feeding Chickens Goat Food

Just to be clear, goat feed lacks many of the nutrients and protein that a chicken’s diet should have. This is why it’s important to ensure your chickens don’t eat goat feed too regularly, just as a once-off meal, or a small snack here and there.

If you own both goats and chickens in the same habitat then it’s inevitable your chickens will eat a bit of goat feed when they come across it. This is completely OK, as long as it’s not constituting more than 10% of your chicken’s daily diet.

There are also some thoughts in the community that goat feed pellets can contain harmful amounts of substances that can be toxic to chickens. In my experience, I haven’t had any issues like this at all and I haven’t seen any evidence which supports it either! But, it’s always good to be aware.

Luckily, chickens won’t often eat goat feed pellets anyway, as they are often slightly too big to eat comfortably for them.

If you’ve seen your chickens eating some of your goat’s feed – don’t stress. It’s completely OK on rare occasions. So long as your chicken is predominately eating its own seed mix or layer pellets then it will be getting all the nutrition it needs for regular laying and for its health and well-being.

Still, you shouldn’t encourage your flock to eat goat feed, but it can be used as a once-off supplement if you’ve just run out of their normal feed, or on the odd occasion as a treat or if they find it while foraging in the yard!