Hay is a farm staple for a reason. It’s a perfect substitute for livestock to feed on when they aren’t able to graze, providing a balance of nutrients and energy. Cows adore it, horses go crazy for it, and goats certainly wouldn’t say no when it’s offered.

But what about chickens? Can chickens eat hay?

Well, as we all know chickens really aren’t fussy so they will certainly nibble on hay if it fancies them. Here we go through if chickens can eat hay, which types are best, and what to be aware of.

Chickens do an extraordinary job at finding food and only eating it if it’s good for them, well most times anyway!

If you’ve seen your chicken nibbling on the ends of some hay — don’t fret — chickens can eat hay and consume it safely in normal doses. In fact, if your chickens don’t have access to greens to forage on all year round then hay can be a great substitute for a lot of nutrients they would normally get from foraging.

Some hays are more nutritionally beneficial than others for your chickens. Alfalfa hay, for instance, is an excellent addition to your chickens’ daily diet. The same is said with oat hay and triticale hay. Timothy hay, on the other hand, is best suited for horses, rabbits, and cattle only. It has little to no nutritional value to chickens.

Alfalfa hay, oat hay, and triticale hay can be eaten raw or processed, but if given the choice, always go natural. Hay bales are good all-in-one options as they’re seeded with a mixture of alfalfa, clover, fescue, ryegrass, and a number of other healthy grasses and legumes.

Plus, hay bales often house a number of bugs and insects that your chicken can peck at and eat like mealworms, bran bugs, and other pests.

With that said, hay should be a complement to, rather than a replacement for, chicken feed. Your chickens won’t thrive with just hay, so it’s best to simply allow them access to it while they’re free-ranging. Your chickens will make the choice themselves if they want to eat hay or not, as some chickens love it and some never touch it!

Timothy hay is extremely common and is a price efficent feed for many animals such as horses or cattle. However, it’s very low in protein, but high in fiber and energy content, and is known to be easily digestible.

Although timothy hay is safe for chickens to eat and isn’t necessarily unhealthy, it just doesn’t have the nutritional value that will really benefit your chickens. So, don’t be concerned if you see your chickens eating timothy hay, but don’t go out of your way to include it in their daily diets.

Nutritional Benefit of Hay for Chickens 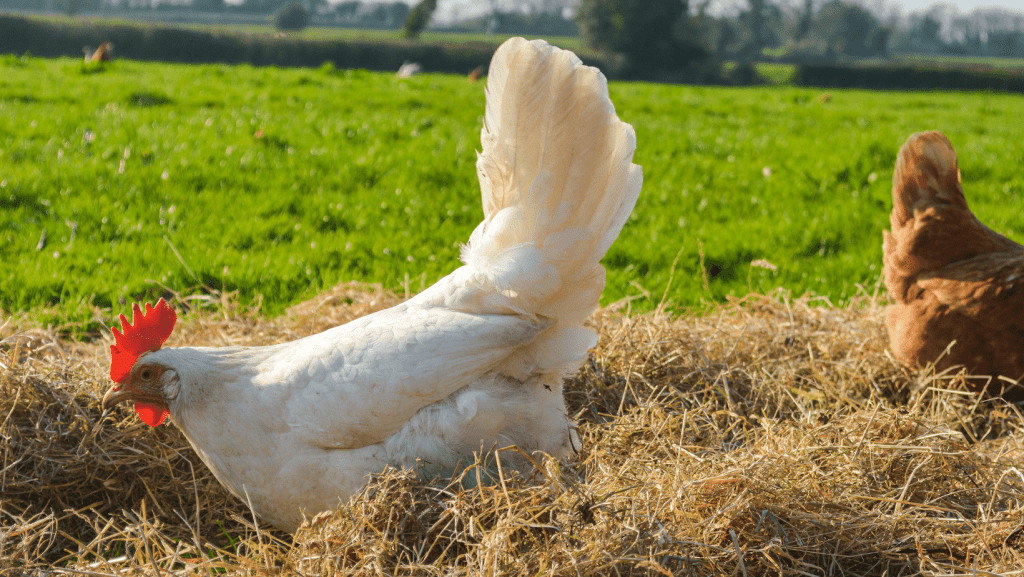 Unsurprisingly, hay comes with a number of health benefits for chickens. It’s no wonder it’s a staple food for most domestic farm animals.

Alfalfa hay is packed with vitamins and minerals, including vitamins A, B, C, E, and K, as well as protein, potassium, zinc, iron, and calcium. It also regulates and slows down blood sugar absorption to help keep glucose levels in check. This makes alfalfa hay a valuable dietary addition to your chicken’s normal diet.

Oat hay is just as nutritionally packed as alfalfa hay. It’s an excellent source of fiber and magnesium. This type of hay is especially beneficial when fed in combination with alfalfa.

Triticale is a cross between wheat (Triticum) and rye (Secale). Due to its high starch digestibility, triticale is believed to be superior to other grains.

According to research, chickens who have 85% triticale in their diet produce eggs at the same rate as hens receiving more conventional diets. The take-away here is, hay is nutritious and supplies chickens with much of the essential vitamins and energy required for their busy schedules!

Again, you don’t want to use hay as any kind of replacement for a normal chickens’ diet, only as an option to forage and snack on throughout their time in the yard. Always go with a balanced approach, with 85-90% normal chicken feed, substituted with healthy table scraps. My go-to’s are root vegetables like beetroot or radish, fruits like mango, and seeds like poppy seeds.

Risks Of Feeding Hay To Chickens

In my years of chicken keeping, I have never come across any issues of crop impaction. Back on my farm chickens were able to free-range all around and we stored hay near the barn so that they would have regular access too. But, to ensure your chicken’s safety I would always make sure they have a balanced diet and don’t just simply eat hay. After all, it’s all about balance and too much of any one food group will likely lead to health complications.

Some backyard farmers use hay or straw in the chicken coop or chicken run for warmth. Although this can be a good substitute for wood shavings as chicken coop bedding, it’s imperative that the hay you use is completely dried, as ‘green’ or fresh hay attracts too much bacteria or mold over time which can be harmful to your chickens. Pine needles are actually a great alternative to use as bedding in your coop or chicken run.

Also, avoiding feeding any kind of hay to baby chicks, they simply don’t have the means to digest it and receive the nutrients.

Well, can chickens eat hay? Yes, they absolutely can, and in some places where fresh green foraging land is hard to come by all year round, hay can be a perfect substitute.

It’s important not to actually feed your chickens hay in their normal feeders or with other foods, but instead simply allow your chickens access to the hay bale so they can nibble on it when they need it.

Be sure to only use hay that the chickens can digest in normal doses, such as Alfalfa hay, oat hay, or triticale hay.