There’s a fine line between chaos and order in the backyard when you own multiple different animals.

Amongst all the challenges of a lively backyard, making sure the animals eat their own food is certainly one of them. I mean, it’s almost inevitable that there is a bit of sharing of foods going on!

So, whether you own both chickens and rabbits, or you’re a chicken owner who got their hands on some rabbit food, we’ve got you covered.

Here’s whether chickens can eat rabbit food, whether it’s safe or even considered healthy for them, and why they shouldn’t eat too much! 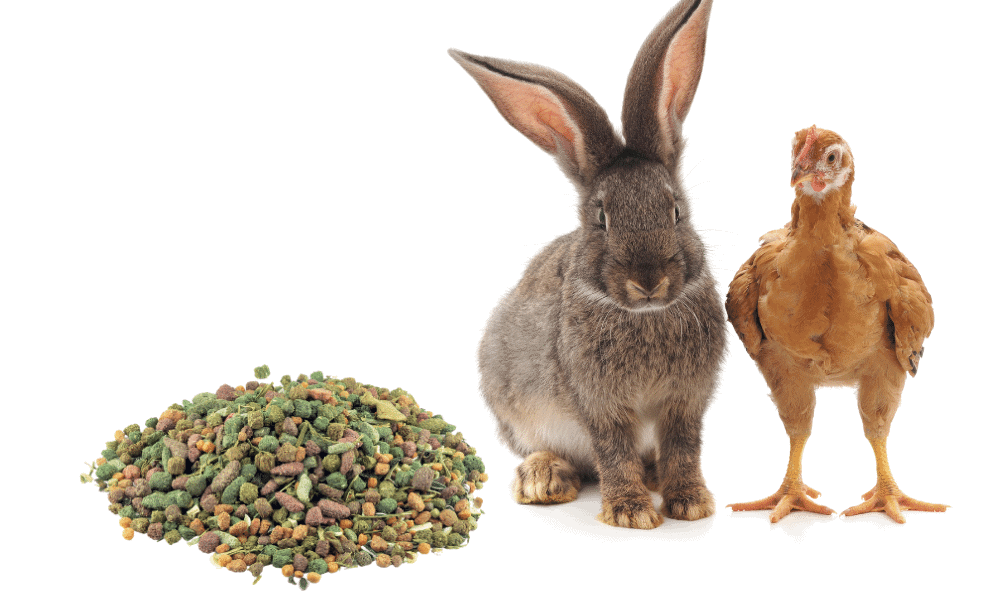 There are really only two reasons you’d be asking yourself whether chickens can eat rabbit food. Either you own both rabbits and chickens, and you’ve seen your chickens eating some of their food. Or, you’ve somehow ended up with some rabbit food and you’re not wanting it to go to waste.

The good news is that rabbit food pellets are completely safe for your chickens to eat, whether it’s alfalfa-based or timothy hay-based.

But, just because it’s safe for your chickens to eat, doesn’t necessarily mean it’s healthy, nor does it mean that it contains the vital nutrition that a chicken needs.

However, so long as your chickens are eating a formulated seed mix or layer pellets for around 90% of their diet, a small supplement or snack of rabbit foods is absolutely fine. The same can be said for most animal feeds, as chickens can eat goat feed, all-stock feed, or even hamster feed, etc.

Is Rabbit Food Healthy For Chickens?

Just to be clear, rabbit food is made to cater to the nutritional requirements of rabbits – not any other animal. Whether it’s pellets primarily made from alfalfa, timothy hay, or a mix, these pellets are formulated to deliver a rabbit optimal nutrition.

The same can be said for chicken feed, as it’s specifically made to cater to the protein, calcium, carbohydrate, and energy requirements of a laying-hen, or adult chicken.

The nutritional content of rabbit food pellets includes up to 14% protein, 1% fat, and 1% calcium. Whereas, chickens actually require between 16-18% protein for regular and healthy egg-laying and overall well-being.

Nonetheless, a small amount of rabbit food in a chicken’s diet is completely OK, and some of the ingredients are actually considered healthy for chickens, including calcium, fiber, and vitamins.

What Happens If Chickens Eat Too Much Rabbit Food?

If your chickens have had too much rabbit food in one meal, chances are they will be perfectly fine. As long as they start having their normal seed mix or layer feed as their primary source of food again after that.

So the odd meal or two won’t hurt in the grand scheme of things. But, if your chickens are eating too much rabbit food over time they may start to show some real and detrimental effects.

This is more because as your chickens fill up on rabbit feed, they stop eating as much of their normal formulated feed. Over time if this keeps happening, your chickens may start to experience vitamin deficiencies and malnutrition.

Similarly, the lack of protein over time will cause issues in your chicken’s egg production, cause lethargy and muscle weakness, and more.

This is why chickens shouldn’t overindulge in rabbit root, or eat it as their main source of food. The same can be said for chickens eating turkey feed, game bird feed, even parakeet feed!

How Much Rabbit Food Is Okay to Feed My Chickens?

If possible, you shouldn’t feed rabbit food to your chickens at all.

I mean, if they get into it themselves, or only have a small amount it’s completely harmless. But, you shouldn’t go out of your way to feed it to them.

In some circumstances, you may be left with extra rabbit food, and not wanting it to go to waste you may think of feeding it to your chickens.

If you must, you can mix a cup of rabbit food, so long as it’s alfalfa or timothy hay-based, with 9 cups of regular chicken feed. This ensures that chickens are still eating 90% of their diet as normal feed for general health and well-being.

Otherwise, the odd bit of rabbit food pellets here and there won’t do any harm either! 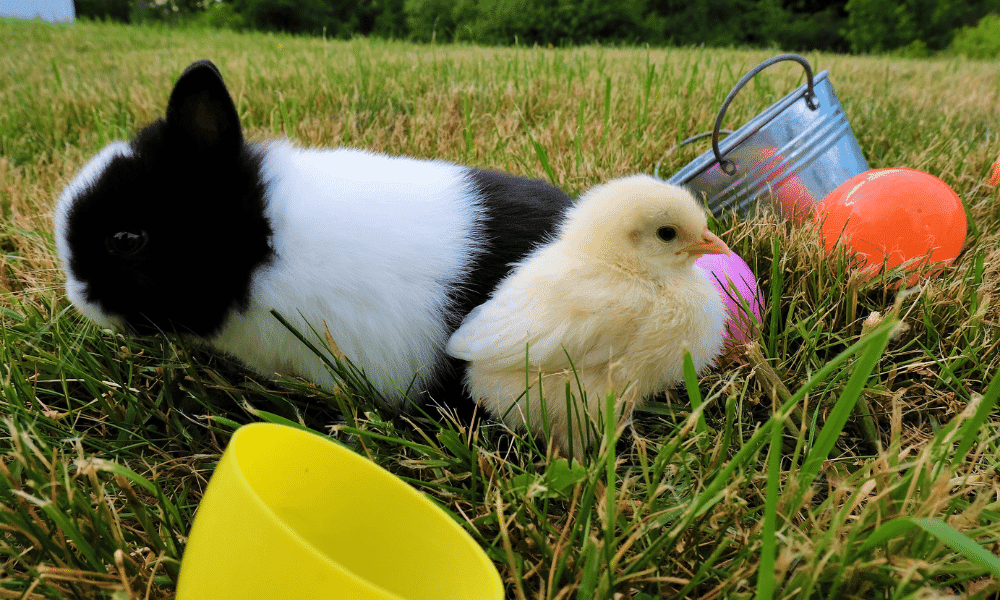 Those that have raised chickens more than a few times in their life will know just how impactful vitamin deficiencies can be. This is why it’s vital that baby chicks eat chick starter for the first 8-12 weeks of their life.

For this reason, you should never feed your baby chicks rabbit food. If they have accidentally had a small amount – it’s absolutely OK. But you should prevent this from happening wherever possible as rabbit food is simply not suitable for baby chicks.

To Wrap It Up

If you raise chickens and rabbits in the backyard, then you can only go so far as to stop your chickens from eating rabbit food.

Just remember, so long as it’s only a small amount here and there, or as a rare treat, it’s absolutely safe for your chickens to eat rabbit food.

However, you shouldn’t actively feed your chickens rabbit food. It doesn’t have enough protein or other vitamins and minerals for a healthy and happy chicken!

After all, what your chickens have in their diet ultimately comes out as delicious eggs. So, you want the best diet for the best quality eggs