Egg production is one of the key reasons people love raising backyard chooks — aside from their hilarious personalities and genuine companionship!

But, have you ever gone to collect your eggs in the morning to have found more than expected? For example, finding 5 eggs for just 4 hens?

You’re not alone and your curiosity is certainly shared amongst many backyard chicken owners.

It’s not uncommon that chickens will lay an egg every day throughout most of the year, but are chickens able to lay two eggs in one day?

Here’s whether it’s possible for a chicken to lay two eggs in one day, how long it normally takes to produce and lay an egg, and if chickens can lay two eggs at the same time!

Can Chickens Lay 2 Eggs A Day?

It’s now common through selective breeding to produce chickens that lay much more frequently, lay earlier in their life, and develop much faster. All while still being healthy and happy chickens.

But, no matter how good the chicken is at producing eggs, it still takes time and energy to produce an egg!

Some chicken owners swear that one of their chickens has laid two eggs in one day, but can this actually be possible?

Well, the truth is, a chicken can lay two eggs in one day but it’s extremely rare.

So, a chicken can lay two eggs within a 24-hour period if things move as quickly as possible. On rare occasions, chickens can lay eggs quicker than 24 hours, but it’s more likely something will have been missed during the process, so the egg may be smaller or deformed in some way.

So, if you’ve found more eggs in the coop than you have hens, it’s more likely that you simply missed one at the last collection rather than your chickens laying two eggs on the last day!

How Long Does It Take For A Chicken To Lay One Egg? 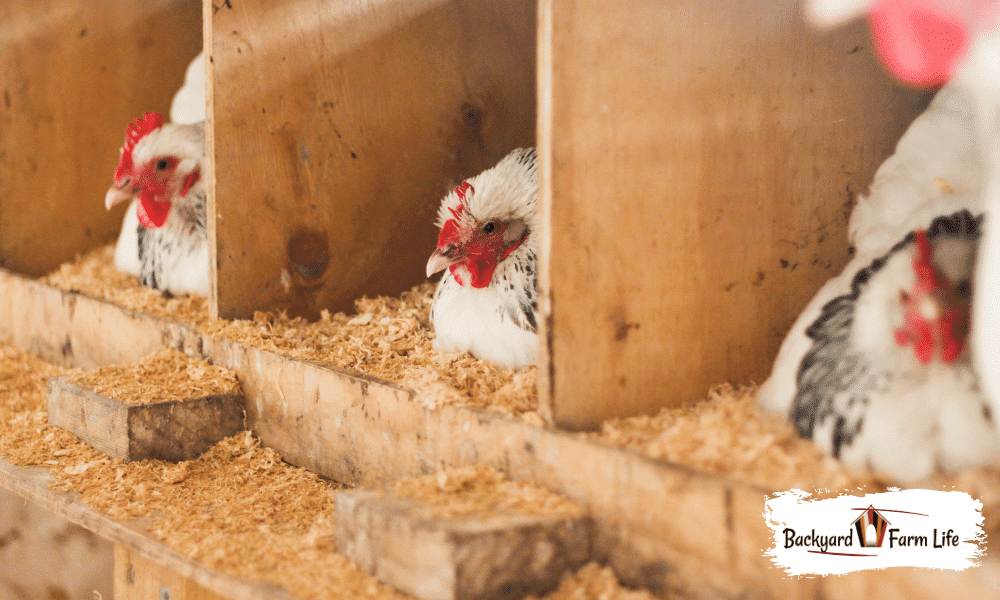 To get a full idea of how long it takes a chicken to lay one egg, we should take a quick look at the biological side of this process.

The egg-laying cycle starts in the chicken’s ovary, where a mature ovum (egg yolk) slips into the infundibulum. This is a funnel-shaped structure where eggs wait to become fertilized. This step isn’t essential, and the egg will keep developing even without fertilization!

The egg white will form around the yolk and begin to grow. Then, the initial shell membranes, both inner and outer, are formed around the egg.

All of this process so far can take between 4-5 hours depending on the hen, not including any rest period between the last lay.

Then, for the next 20 hours or so the shell is formed and reinforced, in the “shell gland”.

Finally, when the egg is fully developed and the hen is ready, she will get comfortable (most of the time!) and lay the egg out of the cloaca.

So, you can imagine with this demanding egg production process, that it’s next to impossible for a hen to lay two eggs in one day.

Can Chickens Lay Two Eggs At Once? 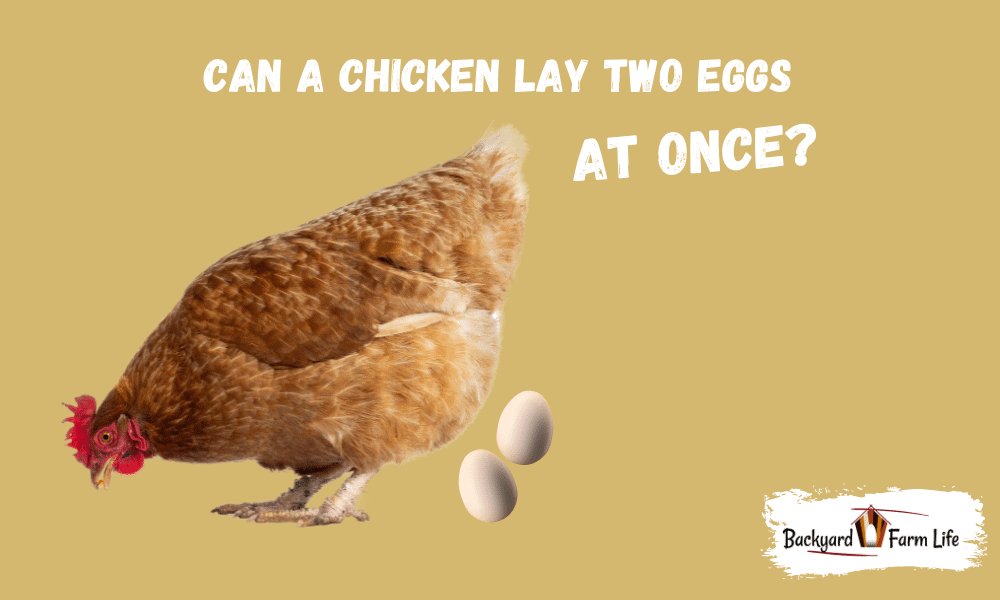 To be completely frank, something would have to go very wrong in a chicken’s egg-laying cycle for a chicken to lay two eggs at once.

I’m not saying it’s impossible, and there are bound to be a few reported cases or two, but it goes against the chicken’s natural egg-laying ability.

It’s more likely that a chicken will lay one larger egg with a double yolk than laying two separate eggs. There are even reports of chickens laying an egg inside an egg in a process known as counter-peristalsis contraction.

A chicken laying three eggs a day is near impossible.

If they did, they would forever be known as “super-chicken”, as it’s simply not possible for a normal hen to produce three eggs within 24 hours.

If there were ever a case of a chicken laying three eggs a day, there’s a certainty that something would have gone astray in the normal, healthy egg-laying process of a chicken.

A lot of us egg-lovers wish our chickens would lay two eggs a day each, so long as they remained healthy of course.

Although it’s unlikely for a chicken to lay two eggs per day, there are certainly a lot of ways you can maximize their egg productivity.

Outside the commercial farming environment where egg production is their key focus, there are several strategies you can incorporate into your backyard flock to improve egg production.

The best quick tips to maximize egg production in your backyard chickens are:

Still, it’s important to note that most chicken breeds will go through cycles of laying one egg a day, and stopping for a while once she has laid her “clutch”. The length of the break can depend on a variety of factors and is considered a healthy part of a chicken’s life.

Everyone loves collecting their chicken’s egg. There truly is something special about it.

Because a chicken egg laying is dictated by a set agenda of the egg production cycle which takes around 24-26 hours, it’s highly unlikely your hens will lay two eggs a day.

But, it’s not impossible. They could lay at the very beginning and very end of the day, or an egg could come out more quickly if something went wrong in the cycle.

Still, if you’ve found more eggs in your coop than the number of hens you have, it’s more likely you’ve simply missed the last collection than your chooks laying multiple eggs in a day!

If you’ve had any stories about your chickens laying rapid or multiple eggs, please share in the comments for all of us!