Can You Potty Train A Chicken? (From Litter Boxes To Diapers)

I had to do this for one of my new batches of young silkie chicks last winter when we didn’t have another spare appropriate coop to keep them in!

Can You Potty Train A Chicken? 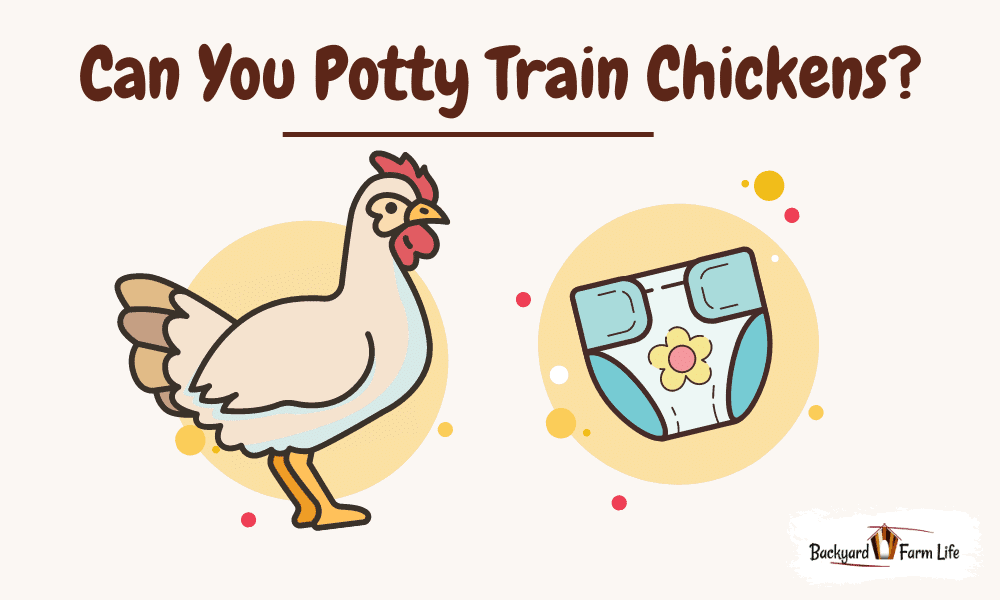 If you’ve raised backyard chickens before you can attest that they really do their business EVERYWHERE and ANYWHERE.

From the lawn to the dirt. Inside the coop, outside the coop. Even in their nesting box and from their roost.

Well, it’s challenging I’ll tell you, but chickens can indeed be potty trained.

The best way to potty train your chicken is to repetitively reward them for this desired behavior. Persistence and patience are key. But, the real challenge is making sure the chicken understands the link between the reward and them pooping in the right place!

Can You Train A Chicken To Use A Litter Box? 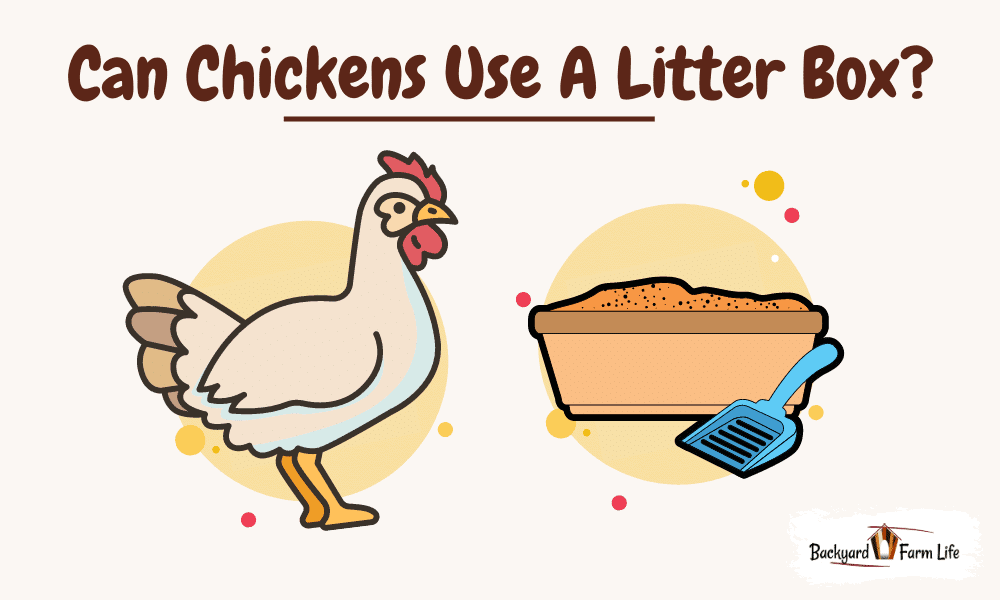 Training chickens to use a litter box isn’t as uncommon as you’d first think. Many chicken breeders use it whilst their chicks as still too young to be housed outdoors in their coop.

Usually, you can move your chicks from the brooder to the coop outside from about 6-8 weeks old, but it can vary on the breed of chicken and climate. Some chicken owners simply prefer to keep them indoors just that little bit longer too.

This is exactly where training your chickens to use a litter box can come in handy.

I’ve successfully encouraged silkie pullets to go toilet in the litter box while I housed them indoors. Although it didn’t have a 100% success rate, it made clean-up so much easier!

EarthSongFarm shared a great video of how they trained their chicks to use a litter box!

Here’s a breakdown of the most important steps when training your chicken to use a litter box.

First and foremost, you need to choose a place where your chicken would naturally go when they need to poop.

It’s also a lot more effective to keep the litter box in the same location for the entirety of the training process, and beyond.

Choose a place that feels right and keep it there while you potty train your chickens!

Chicks and chickens will go to the toilet 15 times on average per day. You can learn a lot from taking a close look at their behavior before they go poop.

Yes, you heard me right, you’ll be watching your chicks do their business. But, what you’ll pick up are visual cues that tell you that they’re just about to go. From there you can move them to the litter box and prepare a treat to reward them.

Some of these pre-poop behaviors include shaking their feathers, standing up straighter, etc.

Of course, it’s not always a certainty they’ll go.

You can also pre-move them to the litter box when they haven’t gone for a while, in hopes they may go soon so you can reward the behavior!

Use A Reward-Based System

Treats will be your best friend when training your chickens, whether it’s to poop in the litter box, or anything else you wish to teach them.

You see, the best way to train a chicken is to use operant conditioning, a technique aimed at rewarding a specific behavior with a specific reward (or in some cases, a specific punishment).

So the aim when you’re training chickens to poop in the litter box is the continuous and repetitive pairing of the pooping behavior with a reward, the treat.

This is the best and most reliable way to potty train a chicken.

If you said the words “chick diapers” 50 years ago, you’d be met with some very strange, and frankly discerning looks.

So much so that there are now multi-million dollar businesses dedicated to providing our fluffy feathery friends with a comfortable snug nappy for doing their business in – absorbing the moisture and holding any otherwise messy droppings.

In all honesty, I have yet to try chicken diapers, but there are some that swear by them, claiming chickens don’t mind at all and can be left free to roam the house as they see fit, without having to worry about their droppings.

So, chicken diapers do really work, but are more suited to those that wish to keep their chickens inside on a regular basis.

Can You Potty Train Baby Chicks?

Handling day-old chicks will allow them to “imprint” on humans, making them feel much more comfortable when being handled.

But, although you can train them to do some basics like come for food from only a few days old, it’s generally too hard to teach them to use the litter box until they’re at least 7-14 days old.

From this age, you can start encouraging them to go to the toilet in your chosen location by showing them treats while they are in the litter box and giving them a reward when they go to the toilet!

Though this has to be repeated over and over, and you can never be too patient. Although some chicks may pick it up sooner, some may not make the association for ages, if at all! 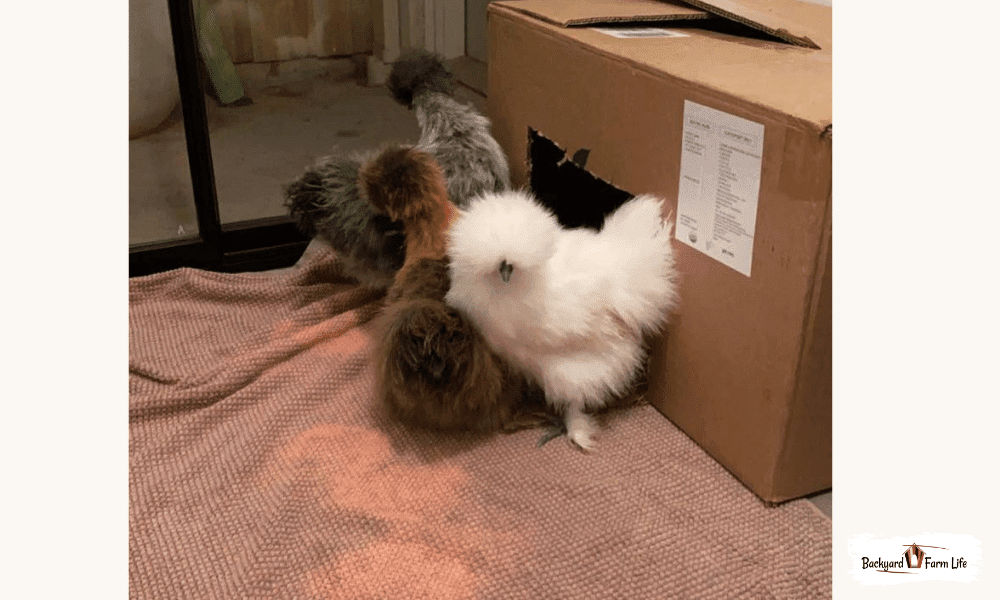 Potty training any pet can be challenging, and you need to be prepared for a bit of a mess. But once they learn things become much easier.

It’s no secret that potty training chickens can be a difficult task.

But, by being patient, and with repetitive, persistent rewarding of the pooping behavior in the litter box, you will be able to successfully potty train a chicken.

This can be perfect for when you’re wanting to keep your chickens inside for some time, or if they’re still too young to be moved to the coop outside!

If you really can’t get it to work, you can always try chicken diapers, as it’s very clear they can work a charm — but I’ll leave this choice up to you!