Cayuga ducks are at the pinnacle of beauty.

Although not as common as Mallards or Pekins, Cayuga ducks are growing in popularity due to striking appearance, gentle temperament, great egg-production, and their quiet quacking nature.

It’s a common need for poultry owners to identify whether they’ve got themselves male or female ducks. After all, you need to prepare your flock and accommodations accordingly.

But, with Cayuga ducks, it’s not that easy. You can’t simply rely on appearance!

Here are the main differences between male and female Cayuga ducks, all their differentiating traits, and how to tell if a Cayuga duckling is male or female. 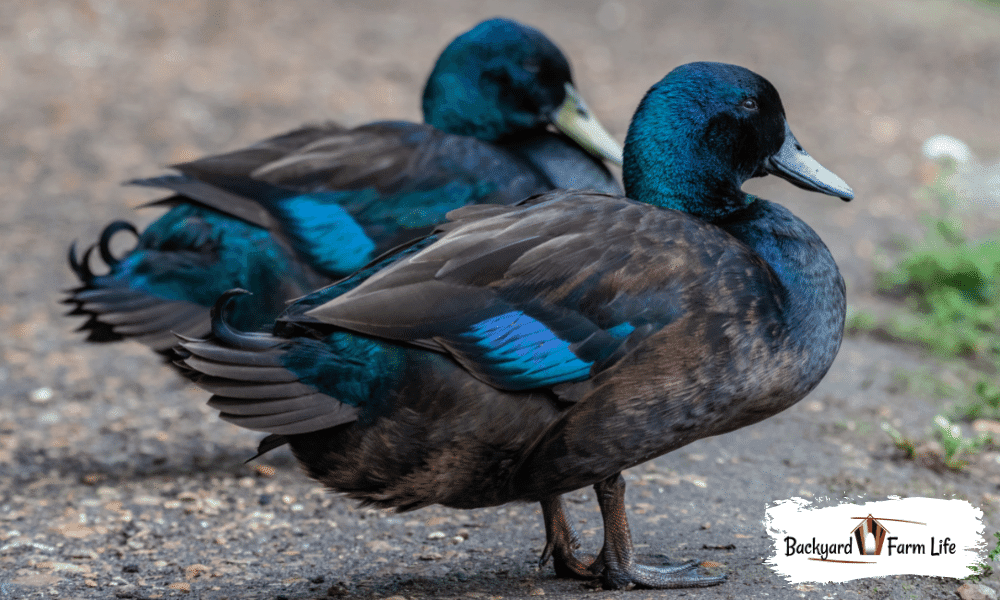 Some duck breeds have a few key physical differences that make things easy when it comes to telling the difference between males and females. Unfortunately, Cayuga’s are not one of them!

Cayuga hens (females) and Cayuga drakes (males) share so many similarities it’s truly hard to tell them apart just by their looks. Luckily, there are slight physical differences to look for, and a handful of behavioral differences – including their quack!

Here are all the differentiating characteristics of Cayuga ducks and how you can use them to tell whether a Cayuga duck is male or female.

The color of the Cayuga ducks plumage is almost identical between the drakes and hens. A gorgeous shimmery black-green coat. As light hits their feathers it reflects and reveals amazing shades of a dark greenish blue.

As ducklings, their plumage appears dark brownish-black, but as they grow their adult feathers these amazing colors begin to develop. As they grow into elderly ducks these black-green feathers eventually get replaced with white ones.

This doesn’t make it easy to tell the difference between male and female Cayuga ducks based on plumage color alone. Although females tend to transition to whiter feathers earlier than males.

Even though it’s tough telling the difference between Cayuga male and female ducks by looking at their plumage and appearance, there is one reliable way to tell the difference: their quack!

This key difference in their quacks can be noted from as young as 4-8 weeks old too! This makes a Cayuga’s quack one of the key ways to distinguish males from females, even has young ducks!

This is a common difference in many duck breeds such as Khaki Campbell males or females, Pekin duck males & females, and a whole lot more.

For good reason, Cayugas are considered one of the best backyard domestic breeds when it comes to temperament and friendliness. In addition to being cold hardy and good in hot weather, they lay generously and overall are super chill.

This goes for both male and female Cayuga ducks, both have equally good temperaments and are gentle in nature, especially if they were reared by hand and have imprinted on humans!

When it comes to their behavior, there are a few differences you can look out for that can help you determine their sex.

For one, Cayuga hens will begin laying eggs from as young as 5 months old.

On the other hand, Cayuga drakes will begin mounting and mating behaviors from as young as 4 months old.

As a generalization, from as young as 8-12 weeks old Cayuga drakes will also become “greedier” and more confident when it comes to sharing food or space.

Another reasonably reliable observation of a young male Cayuga duck is the development of a curly tail feather.

Although this isn’t always a certain predictor, male Cayuga ducks tend to develop curly tail feathers from as young as about 8-12 weeks old. Cayuga females normally lack these feathers or grow them much later than males.

The problem with using this as an indicator is that a curly tail feather isn’t always present in males, and it’s possible to grow on a hen too. For this reason, you can’t base a determination on the curly tail feather alone, but you can use it to further your investigation.

Although size differences between male and female Cayuga ducks don’t tend to show until maturity it’s still good to note.

From about 3-4 months old male Cayuga ducks will appear a touch larger than their female counterparts. Cayuga drakes will generally weigh up to 8 pounds, whereas Cayuga hens will only get to about 7 pounds.

How to Tell If A Cayuga Duckling Is Male Or Female 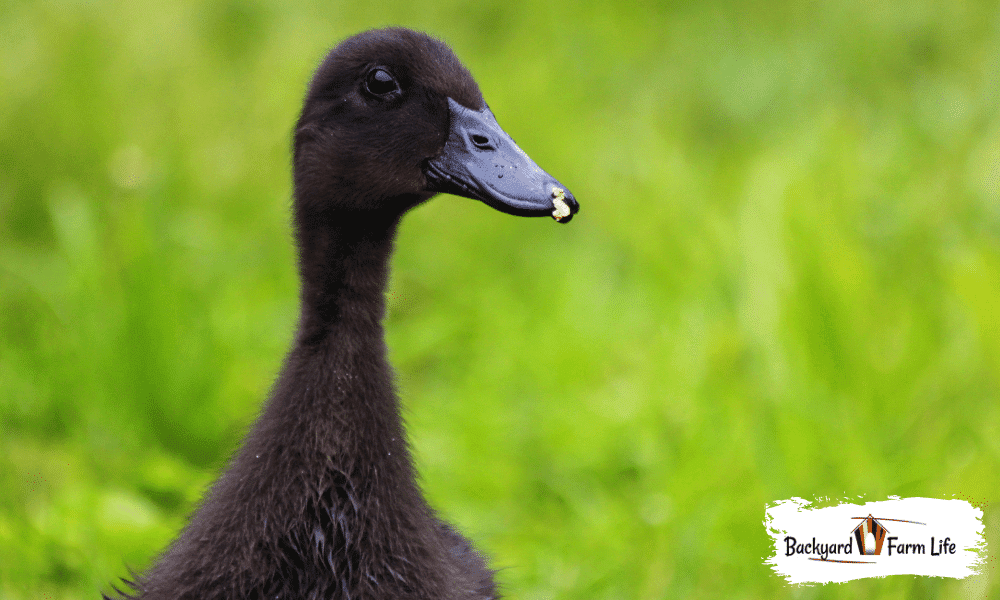 Telling the difference between a male and female Cayuga duck at maturity can be hard enough, but for younger ducklings, it’s even more challenging.

From 0-4 weeks there’s almost no way to tell the difference unless you’re a professional and have expertise in vent examinations.

But, from as young as 4-8 weeks old you can start to observe some key differences, and build a case towards your Cayuga ducklings being male or female.

So, to determine whether you’ve got male or female Cayuga ducklings, look for the following traits:

Although the first instinct is to look for physical differences, when it comes to Cayuga’s there’s not much to go on.

Although you can compare their size and watch for the growth of an early curly tail feather indicating a male, it’s best to take a listen to their quacks for a more reliable determination.

The difference in the vocalization of the quack will appear as young as 4-8 weeks old, so it’s a reliable way to determine whether Cayuga ducklings are male or female too!