Why Is My Chicken Laying On It’s Back? (5 Common Reasons!)

Chickens are incredibly routine-oriented. Every day they wake, lay an egg, eat, forage and dust bathe, all seemingly on schedule.

So, when I first saw one of my chickens laying completely on its back it gave me quite a scare.

Spoiler alert: no, my beloved chookie was not dead, it was simply enjoying the sun!

But, as it turns out that’s not the only reason they will do that. So, if you’ve found your chicken doing just the same, here’s all the possible reasons your chicken is laying on its back, and when you should be concerned

Why Is My Chicken Laying On Its Back?

Before jumping to any conclusions, there are actually multiple reasons your chicken could be laying on its back. Not all of them are grim!

As it turns out these chickens are much more complex than we’d ever thought. So, here are all the main reasons why your chicken is laying on its back.

Probably one of the most interesting reasons why your chicken can be laying motionless on its back is something called tonic immobility. This can be likened to hypnosis or a catatonic trance.

Although thought to be caused by perceived danger or threat, as a “fear-potentiated response”, a similar response can be induced on your chickens by focusing their attention on the ground in front of them and drawing a line in the dirt or sand.

This perfectly demonstrates tonic immobility. You can see the chicken lays perfectly still on its back unmoving, almost as if it’s paralyzed!

Alongside chickens, tonic immobility occurs in sharks, rays, opossums, and snakes. It also happens with goats; they’d freeze up and topple over as if struck by a hypnotizing spell.

So, if your chicken is on its back, it’s possible that it’s encountered a threat and has simply remained still.

New chicken owners are often surprised and intrigued when they first see their chicken’s dust bathing. You see, chickens don’t require water baths. They simply use dirt or sand, toss it through their feathers, and kick it about.

This process actually cleans their feathers and removes any caught debris or other unwanted stuff!

So, if you’ve come across your chicken laying on its back in a hole in the sand or dirt, then it’s likely it was simply dust bathing.

Chickens Bath In The Sun Too!

You’ll only believe me when you see your own chickens doing this, but chickens do actually love sprawling on their back, sunbathing in the afternoon sun.

This is all part of how a chicken regulates its temperature, and if it’s not too hot for them then they will sometimes even take a nap like that too!

One of my chickens can’t get enough of it, and I’ll often find her lying in the sun in random places in my backyard. Believe me, I’ve been quite scared a few times, but now I know it’s just normal for her!

And here’s the sad truth.

Sometimes, unavoidably, chickens will get sick or injured. Preparing for the loss of a chicken is something that every backyard chicken owner has to come to terms with.

It’s possible that your chicken is lying on its back as a result of injury or illness. In these instances your chicken will likely display other signs of stress or sickness too, so you’ll be able to tell if this is the reason they are laying on their back.

Luckily and surprisingly, this is the least likely reason your chicken is laying on its back. So don’t jump to conclusions if you see your chicken on its back – it’s normally completely OK!

One common reason your chicken is laying on its side or back or is sitting down all the time is that it’s actually suffering from a Vitamin B-12 deficiency.

Vitamin B12 deficiencies in chickens are all too common and usually cause nervous system issues, leg weakness, and toes curling, making normal walking uncomfortable for your chicken. In extreme cases your chicken will end up laying on its side or back more often, to relieve its legs and feet. This will often be the leading cause of a chicken who keeps falling over!

Luckily this is completely reversible. You can specifically get Vitamin mixes for your chickens, and you can start introducing high Vitamin B12 foods to your chicken’s daily diet, like scrambled egg!

Is It Okay That My Chicken Lies On Its Back?

Although this belly-up position is certainly unnatural for your chickens, it isn’t always a cause for concern. Some chickens just love doing it, particularly in the sun on a warm, but not hot, afternoon.

However, if your chickens do look like they are experiencing any kind of physical or mental stress then it’s worth investigating further to see if it’s a problem that’s fixable.

When you find your chicken on its back, gently flip it upright, checking its body for any possible injuries, mites, or signs of illness.

If things are all clear, just monitor them for a while to see if all returns to normal!

Why Is My Baby Chick Laying On Its Back? 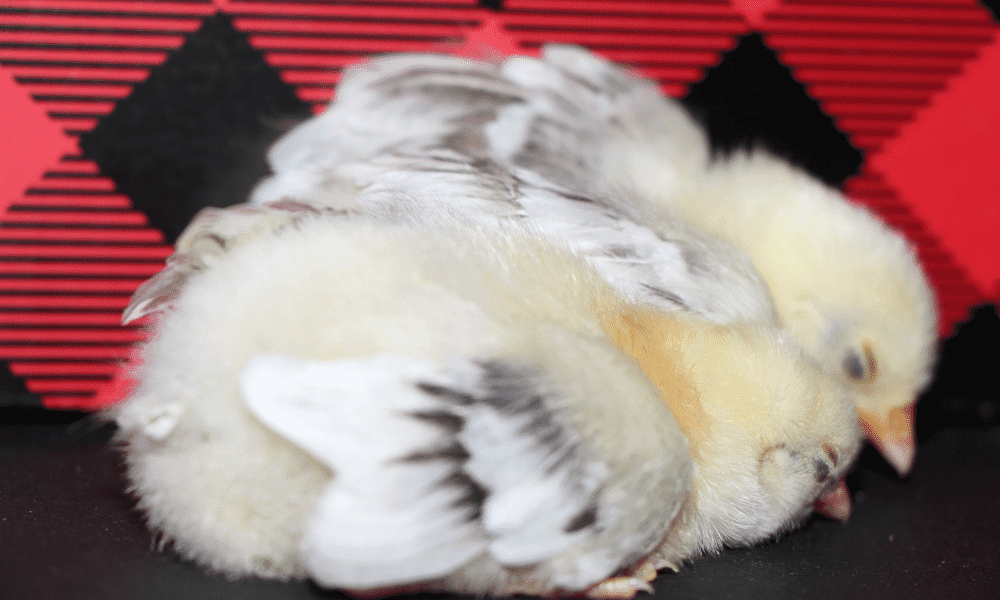 The unfortunate truth with baby chicks is that they are incredibly vulnerable. If you’ve raised baby chicks before you might have seen some abnormalities during their growth phases, as they are simply so rapid that the chick can’t keep up!

One of the most common abnormalities in baby chicks is their inability to walk or stand properly. This often causes your baby chicks to lay down on their side or back!

Luckily, this can sometimes be reversible by ensuring they are getting a healthy diet of a formulated chicks starter — laying off the table scraps for baby chicks until they are at least 8-12 weeks old!

So, chickens laying on their back isn’t always a cause for concern.

Don’t get me wrong, it can sometimes be a sign of illness or injury or even a vitamin B12 deficiency. However, it’s more likely your chicken is just being its normal, sporadic, and entertaining self, or is experiencing tonic mobility in response to a predator (or a line drawn in the sand!)

Still, if you see any other warning signs then it’s worth investigating further.

For more fascinating info on chickens, check out our guides to chicken behavior!