Chicken Memory: What They Can Remember & For How Long

There are two possible reasons why you might’ve ended up here: sheer curiosity or having met a chicken with a weirdly good memory.

It’s funny how many people think chickens aren’t smart creatures when anybody who has owned one will tell you just how intelligent and emotionally capable they really are.

But how much do we really know about a chicken’s memory, exactly?

How Does A Chicken’s Memory Work?

Based on what we can see from the tasks that chicken complete, just like almost every animal on the planet, chickens learn and remember through conditioning or association.

So, if you are looking to train your chickens you can apply classical conditioning, to reinforce behaviors or discourage the behavior by using rewards or punishment.

The association between the behavior and the “reward”, will be eventually learned by your chickens, so they are more likely to complete the behavior because they learn it will most often lead to a reward. This is the best strategy when training your chickens.

This can be induced by humans, like when giving your chickens a treat, but will also happen on a daily basis by their natural environment. For example, chickens that get chased by a dog are more likely to avoid the dog in the future, or when your chickens see you come outside they are more likely to run up to you to greet you (either as a sign of affection or for treats).

But, how deep does this memory go?

What Can Chickens Remember? 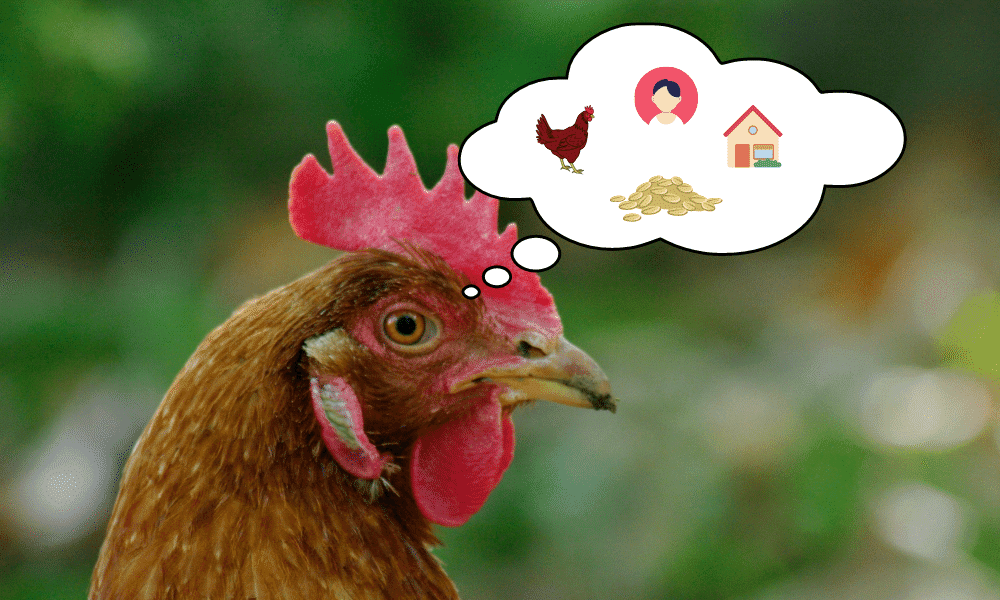 Well, given chickens remember by associating their experiencing with repeated exposure to something, chickens are naturally capable of remembering things that happen around them routinely.

This includes remembering their flock, as it’s known that chickens have friends in the flock, or even “enemies”, sometimes referred to as the pecking order.

Chickens will also remember certain shapes and colors they associated with danger, such as the sight of a black dog or another predator they’ve had a close encounter with.

It’s even suggested that chickens can remember faces, which is why chickens or roosters can be so kind to some individuals and so skittish around unfamiliar faces. Some even go as far as to say that chickens can miss their owners when they’re gone too.

But their memory doesn’t stop there. Chickens are actually pretty clever; if they figured out how to escape their coop or get into the feed one time, they’ll remember how to do it again. They can also learn to perform tricks for food, and you could even potty train them!

Further studies are being conducted to see if there are differences in the memory capabilities between free-range and caged chickens.

Do Chickens Remember Their Owners?

Circumstances change. Not everyone is able to stay with their chickens forever, like if you’re traveling across the country and can’t transport your chickens.

So, if you’ve had to put your chickens up for adoption, give them to a close friend, or find a nice farm for them to retire at, you may have thought to yourself, will they remember me?

Well, chickens certainly do remember their owners when they see them regularly, as they associate companionship, food, and safety with their owners. However, unfortunately, if you do move on without your chicken’s chances are they won’t hold this association forever.

But, this hasn’t been scientifically tested or tried – and there are instances where people have reported their chickens remembering them after seeing them again after several months. So there’s nothing to say that chickens won’t remember their owners forever.

How Long Is A Chicken’s Memory?

The simple answer is, science still hasn’t figured that out yet, but in general, chickens do have pretty good long-term memory.

While science hasn’t given a lot of time to understand how long a chicken can remember things, it has proven that chickens do grasp the passing of time and can recollect familiar objects.

Scientific studies aside, we do know that chickens have a good memory from our own experiences. For example, I got out my old red feeder after 6 months (as opposed to a newer green one I was using) and my chickens immediately knew it was their feeder and came scrambling over.

So, a chicken’s memory will depend on just how strongly they’ve associated an experience with the object or person.

The only people that will say chickens aren’t intelligent are those that have never owned chickens before!

The more you get to know your chickens the more you realize just how complex these little feathery friends are.

So, it’s no surprise that a chicken’s memory is actually much stronger than we ever could imagine. Being capable of remembering experiences, faces, and their flock – all for the purpose of helping them avoid danger and thrive in their environment.