Chickens Eating Dog Poop? (Risks + How To Stop Them!)

If you have chickens and own a dog, there’s bound to be a time when you’ve seen your chickens get a little too close to the dog’s poop.

It’s not a pretty picture and as you’d expect it does come with its risks to your chickens. Here’s why your chickens are eating dog poop, if it’s bad for your chickens, and how to stop them from doing it!

Why Are My Chickens Eating Dog Poop?

Although it’s not the nicest thought, it’s something that must be talked about, particularly if you own both chickens and dogs like many of us do.

As disturbing as it is, chickens will eat dog poop for one very simple reason: for nutritional value.

This doesn’t always mean your chickens are lacking proper nutrition in their diets, it simply means your chickens see nutritional benefit in the dog poop, most likely because it can contain undigested food.

Although this is a much more common act than you would think, chickens eating dog poop can actually have some horrendous impacts on your flock. So, it’s important to take every step to prevent them from eating dog poop.

Is Dog Poop Bad For Chickens?

Chickens aren’t estranged from eating seemingly random items in the backyard, from styrofoam to eating dirt, to even pecking at windows. It’s an inevitable part of a backyard chicken’s life.

However, amongst all the healthy things they can forage for in the backyard, dog poop is not one of them.

These bacteria, particularly salmonella, can impact both egg production, and although rarely, they can end up in the egg itself too! This can be passed through to those who consume the egg too, which is why you should always take as many precautions here.

If your chicken gets sick from eating dog poop you can see issues in your chicken from falling over or losing balance, laying liquid eggs or other problem eggs, and weight loss.

Dog poop is also a very common carrier of worms and other parasites including whipworms, hookworms, roundworms, and more. It goes without saying that you do not want any of these parasites around your chickens, as they can very easily spread it around the flock too.

But, if you’ve seen your chickens have a small peck at some dog poop you don’t always need to panic. If they’re healthy chickens they may be able to digest and resist any bacteria or parasites – but it’s worth taking actions to prevent them from eating poop entirely. 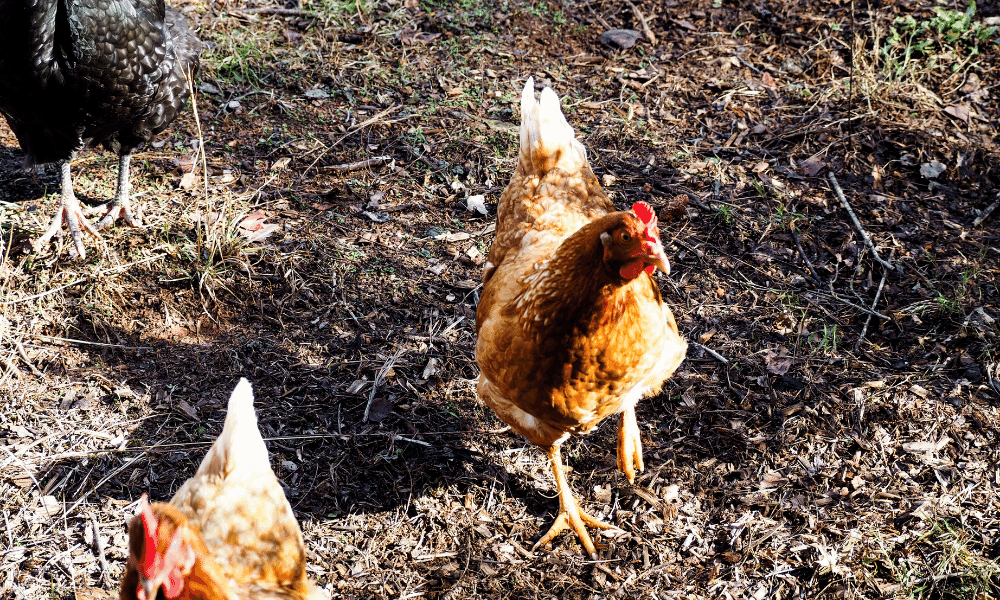 Although it’s something that seems unavoidable, there are actually a few ways you can discourage your chickens from eating dog poop.

The easiest and most effective solution to stop chickens from eating dog poop is to get rid of the poop as quickly as possible.

At times, all of us dog owners can get a little too busy and not pick up the dog poop in the backyard daily. But, if you own chickens it’s an essential daily practice that you need to make a routine – as the consequences can be much worse if you don’t.

Another tactic you can try is moving your coop onto the other side of the yard that your dog yourself does their business at.

The good news is, in my experience, chickens won’t often make it a habit to eat dog poop, and it may just be a once-off action they take to try it, or if the specific poop has a specific appearance that attracts your chooks.

It’s an unfortunate truth that we all have to live with. Sometimes chickens will eat dog poop.

Luckily, it’s not a normal daily behavior that they will do, and some chickens will know to stay clear of it and will never even try it. However, not all chickens are the same!

If you’ve just seen your chicken eat dog poop – don’t panic. Although there are some very true harmful impacts on your chickens, it’s not a guarantee that they will get sick.

Still, if you own chickens and dogs you should make every effort to clean up the poop in the yard – this goes for both the chicken poop and dog poop!