Why Are My Chickens Pecking My Windows?

Chickens are endlessly entertaining. No matter how much I observe their habits and think I’ve seen it all they go ahead and do something completely unexpected, but totally within character.

A few times now I’ve heard a distinct and constant tapping at my patio door glass window. I thought I was going mad, but when I went to check it out I found the culprit. One of my white silkie hens, NeNe, was really sticking it to the window, constantly pecking at it.

I thought it would be a once-off occurrence, and perhaps she was just confused by her reflection. But, the next day she returned and began pecking at the window again – this time she bought her friends too.

Here we discuss why chickens peck at windows and what you can do to kindly prevent them from doing it!

Why Do Chickens Peck Windows? 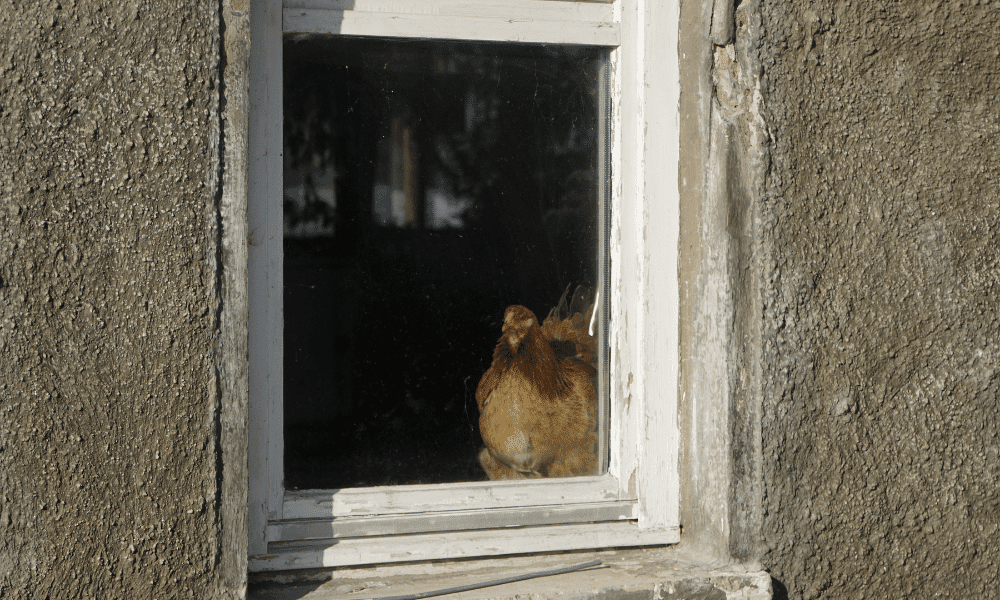 Contrary to common belief, chickens are incredibly intelligent. Although, some behaviors I’ve seen have made me question it myself…

After witnessing firsthand some of my chickens pecking at my windows in the patio, it made me want to get to the bottom of it.

Some chicken owners who have also reported this behavior believed it to either be as a defense response to seeing their reflection, becoming startled or alarmed. Others believed it was simply chickens trying to catch the raindrops as they traveled down the windows.

Both of these reasons themselves could explain it, but I’ve concluded that chickens peck windows as a response to their reflection, but not as a defense response, but as a curious one.

The moving reflection in the glass sparks their curiosity, and your chickens may think it’s a moving insect that could be a tasty snack, or it could even be just to understand what is going on.

The evidence? Well, the tip of a chicken’s beak contains mechanoreceptors, helping them experience the sensation of touch. They use this in their everyday routines to find food and understand their surroundings.

So, your chickens are merely pecking the windows to understand what their reflection really is, whether it’s food, a flock member, or another object.

How To Stop Chickens From Pecking Windows

It’s no secret that the sound of pecking can be frustrating. Plus, the constant pecking surely can’t be good for your chicken’s beaks, or your house for that matter!

If you’ve tried to simply usher your chickens away from the windows when they’re pecking at them, but they come right back for more, then you may need to resort to more permanent measures.

Here are a few tips that work to stop your chickens from pecking your windows:

One sure way to stop your chickens pecking at the window is to use some kind of temporary fencing. You can go all out and get chicken fencing, but simply making a little barrier out of hard-wiring, mesh, plastic, or even wood – anything really works. Even simply blocking the window where they peck with an object.

The only downside is, depending on where the windows actually are, having a barrier set-up could be quite inconvenient and look a little out of place.

Chickens have been proven to express intelligent emotions and characteristics of self-awareness. From chickens being capable of feeling sadness, missing their owners, and even developing friends within their flock.

If you rid the reflection of the window then it will simply appear as a wall to your chickens, and they aren’t likely to continue pecking at nothing.

Luckily you don’t need to go to the extent of installing anti-reflection glass to decrease the reflection of your windows. You can either place decals, vinyl cut stickers or sellotape colored paper over the bottom of the window where the chickens normally peck.

By minimizing the clarity of the chicken’s reflection, it will help prevent your chickens from mindlessly pecking at your windows. You might want to avoid bright vibrant colors though, as they tend to draw the most attention, so you could end up worse off!

The verdict’s out. Chickens simply peck at windows because they are curious about reflections. Whether it’s thinking it’s an unknown chicken, a tasty insect snack, or just trying to catch raindrops, it’s the reflection that causes their curiosity.

Still, the constant and relentless noise can get quite frustrating. Plus, it can’t be very good for their beaks – or you’re windows for that matter!

There are a few good ways you can reduce the reflection on your windows where your chicken’s peck. You can set up a small temporary fence or item to block them, or you can try decreasing the reflection of the window by using colored paper, stickers, or other decors.

You might even find that your chickens naturally stop pecking at the window too. Once they figure it out it gets them nowhere.