Differences Of A Leghorn Rooster And Hen (At All Ages)

Let me guess, you just couldn’t resist getting some leghorn chicks?

These stunning chickens are excellent egg layers, have beautiful personalities, and make for great free-rangers in any sized backyard.

One important step to preparing arrangements for your flock is knowing if you’ve got yourself females (hens) or males (roosters). We’ve got you covered from this perspective!

Here’s how to tell the difference between a Leghorn rooster and a Leghorn hen at maturity and what physical differences show between males and females leghorn chicks at different ages as they grow.

How To Tell The Difference Between A Leghorn Rooster And Hen 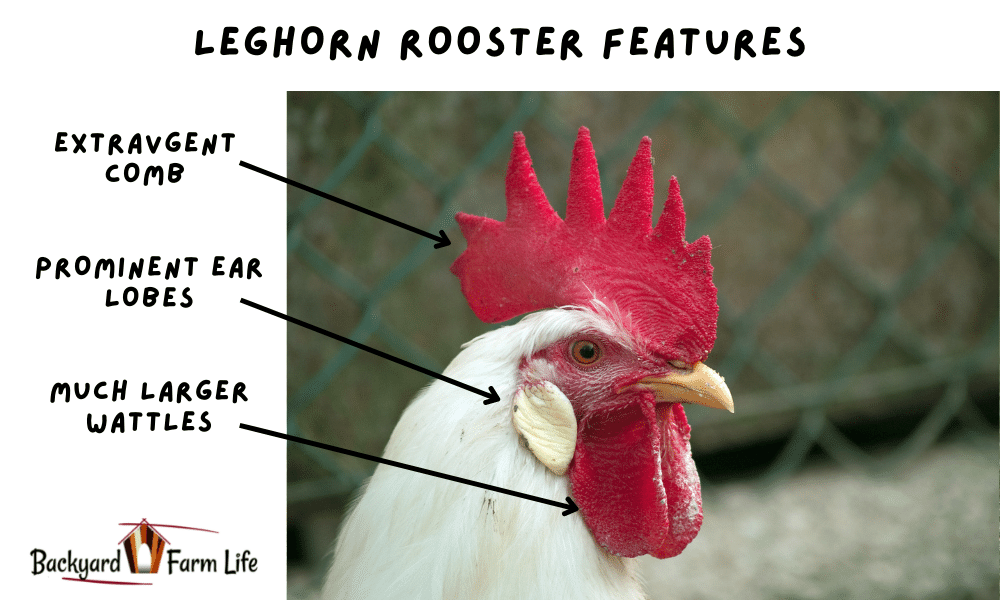 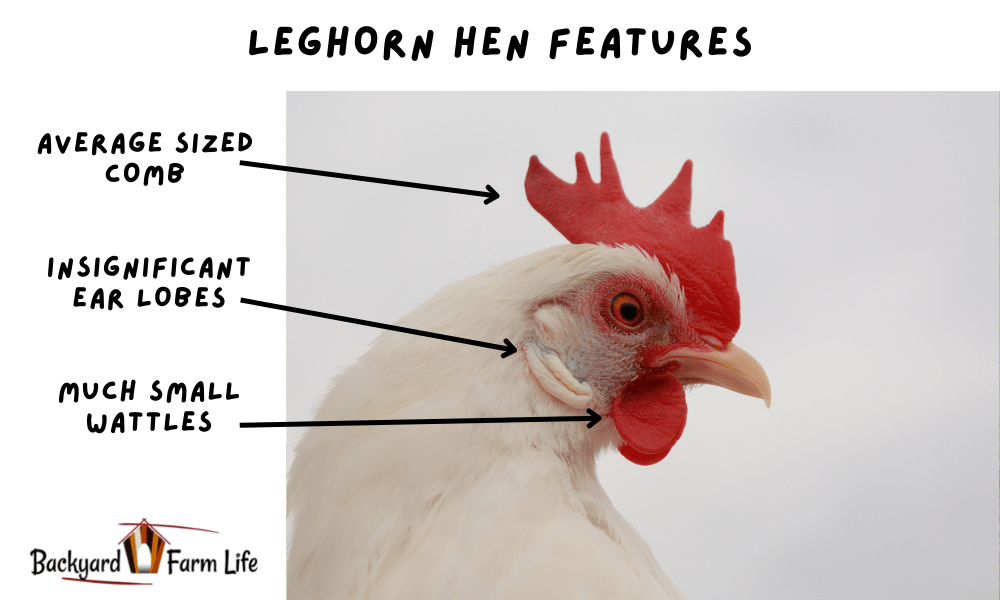 Some chicken breeds have very obvious differences between males and females like the Ameraucana hens & roosters. Others have much more subtle differences or don’t show clear differences until maturity, like Silkies for example.

Leghorns sit somewhere in the middle. It’s not incredibly obvious, particularly in the earlier ages. But, there are a few tell-tale signs of a Leghorn rooster compared to that of a Leghorn hen. These are:

Fully grown Leghorn roosters are about 30% larger than hens. The adult size of a Leghorn rooster is about 6–8 lbs, while hens only grow to be 4–5 lbs.

If you’re looking at an adult Leghorn rooster and hen, it’s very easy to tell based on the size which is which.

However, just be wary, the difference in weight and size isn’t really visible until maturity, as Leghorn pullets and cockerel tend to grow at the same pace.

Leghorns originated from the Livorno region of Italy, which means their bodies adapted to the warm weather of the Mediterranean. This is said to be why both Leghorn roosters and hens grow quite large combs and wattles (as it helps keep the chickens cool!).

This is where some confusion starts because a lot of new chicken owners will see these large wattles and combs on their Leghorns and assume they are roosters. When in fact, a Leghorn hens comb and wattles can grow almost to the same size.

One giveaway, though? A Leghorn rooster’s ear lobes will almost certainly be more prominent and much larger than that of a Leghorn hen!

Plus, a Leghorn rooster’s wattles and combs will start to grow much earlier than those of the hens. From as early as 4 weeks you’ll see clear wattles and combs on your roosters, whereas hens will often take until 8 weeks to properly show theirs.

Nonetheless, in general, Leghorn roosters will grow their wattles and combs much earlier than hens, and they will end up being quite a lot larger and redder.

Roosters from almost every breed grow what’s referred to as “sex feathers” when they reach maturity.

These feathers are located in two primary locations. The hackle feathers on the neck and saddle feathers in front of the tail.

Leghorn roosters will grow thicker and longer hackle feathers, almost appearing puffy. Leghorn hens won’t grow these feathers, and the adult feathers on their neck look smoother and make them appear much leaner.

Leghorn rooster’s saddle feathers grow in front of the tail and are usually long and pointy. They also tend to have longer tail feathers too.

I’m not going to sit here and sugarcoat it for you. Leghorns are known to be a bit more nervous and skittish chickens.

This doesn’t mean they don’t make great backyard chooks or companions. But, it’s clear they enjoy their freedom. This goes for both hens and roosters.

If your Leghorns have been hand raised and have imprinted on humans they tend to be a bit more relaxed. But, they still won’t show as greater affection as some specifically bred chickens, like ISA Brown hens & roosters.

It’s also uncommon for Leghorn hens to become broody and hatch their eggs. So, if you’re looking at breeding Leghorns it’s best to use an incubator.

If you’re still struggling to identify whether you’ve got Leghorn hens or roosters based on physical appearance alone, then you can also look for key behaviors.

From about four months old your Leghorn hens will start laying. So, of course, this means they are female!

Secondly, a Leghorn rooster will begin to crow from about 10-12 weeks old, and by 18 weeks will have found its voice! It’s not uncommon for Leghorn female chickens to squawk, but it won’t sound like the rooster’s crow!

How To Tell If Baby Leghorn Chicks Are Male Or Female

It’s never too obvious whether a baby chick is a male or female from a young age. This is simply because their male or female characteristics haven’t grown and developed yet!

When it comes to Leghorns, they don’t have a clear stamp on their forehead to say whether they are male or female. Instead, you’ll have to examine them and compare them with one another to pinpoint what differences they have.

Luckily there are a few things you can look for at every age. You can begin to piece these together as your chickens grow up, and you can often make a pretty good guess before they reach maturity!

Here’s what you can look for at every age as your Leghorns develop. 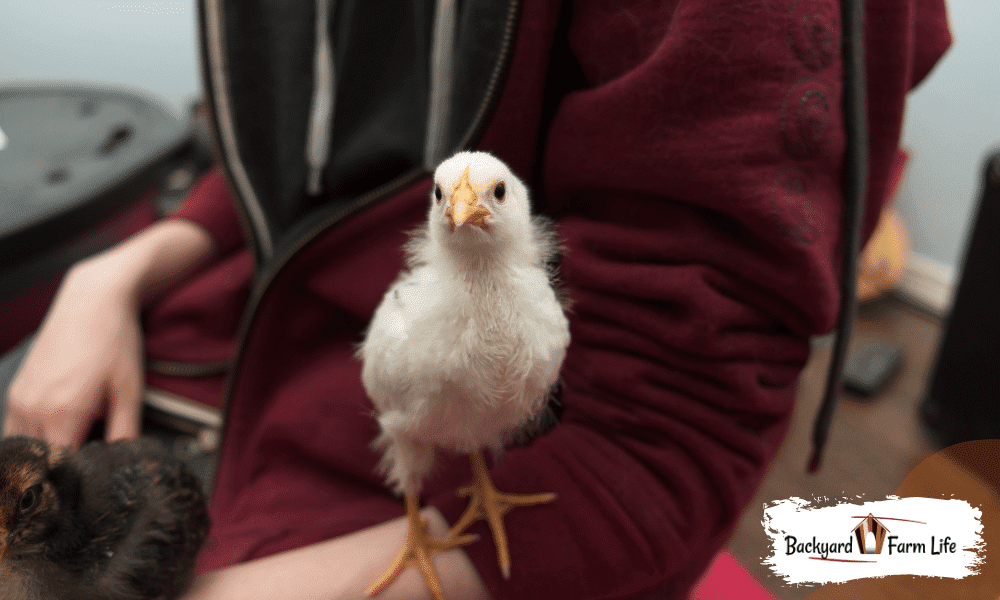 If you’re not experienced in professional poultry sexing then you have very little hope of determining whether a newly born baby Leghorn chick is male or female.

This is because there is very little to go off. Both male and female leghorn chicks share the same size and color, and won’t show any signs of wattles, combs, or other differences until at least 4 weeks old.

If you’re an expert, you may make a judgment based on their wings and by examining their vents. Otherwise, you can start making bets based on your instinct! 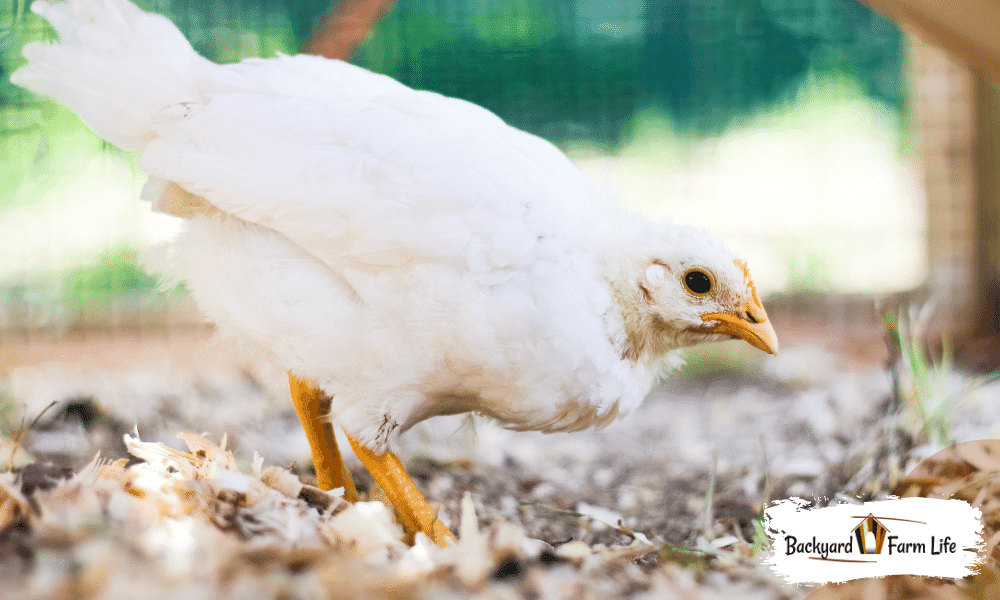 From 4 weeks old you will begin to notice some signs of male and female characteristics. The most obvious is the formation and growth of the wattles and combs.

Although this isn’t fool-proof as there is some natural variance between chickens, it’s certainly one of the easiest “tells”.

From 8 weeks old a Leghorn cockerels comb, wattles, and ear lobs will be much larger and more prominent than the pullets. Plus, it only gets clearer as they continue aging.

By 16 weeks both your hens and roosters will have large combs and wattles. But those of males tend to be redder and larger, and those of females will be more pinkish and often will “flop” over!

By 16 weeks your roosters will have also started to develop their hackle and saddle feathers, which make them look thicker than your hens.

So, when you add up all the differences in physical appearance and behavior, it’s not too hard to piece together whether you’ve got yourself a Leghorn hen or rooster. Depending on the age of your chooks you can look for different key characteristics.

One that stands out at almost any age is their combs, wattles, and ear lobes. All of which are much larger and more prominent in roosters vs. the hens. This, coupled with their overall size, hackle and saddle feathers, and behaviors will give away whether you’ve got a roo or a hen!