Broiler chickens are those that are born, bred, and raised for their meat. They’re one of the most commercially farmed animals in the world, and have one of the shortest life expectancies due to their rapid and quick growth to process date.

Although they are both chickens, broiler chickens and laying hens are bred and raised differently. One for its meat, the other for its eggs.

But you may have had a thought cross your mind before: is it possible for broiler chickens to lay eggs?

Most broiler chicken breeds are actually hybrids. These hybrids are made by selectively breeding different chicken breeds to maximize development and size. These are chickens like the red ranger, cornish cross chickens, etc.

Similarly, the best laying hens are hybrids too, selectively bred for maximizing healthy egg-laying capabilities, such as the ISA Brown or Golden Comet.

But, just because a broiler chicken is raised for its meat, doesn’t mean it’s not capable of laying eggs, becoming broody, and ultimately hatching its eggs.

It’s also important to note, however, that most hybrid chickens that are bred for their meat won’t turn out to be the best egg layers, simply because they aren’t specifically bred for that. Nonetheless, they could still fetch between 100-150 eggs a year depending on the breed. 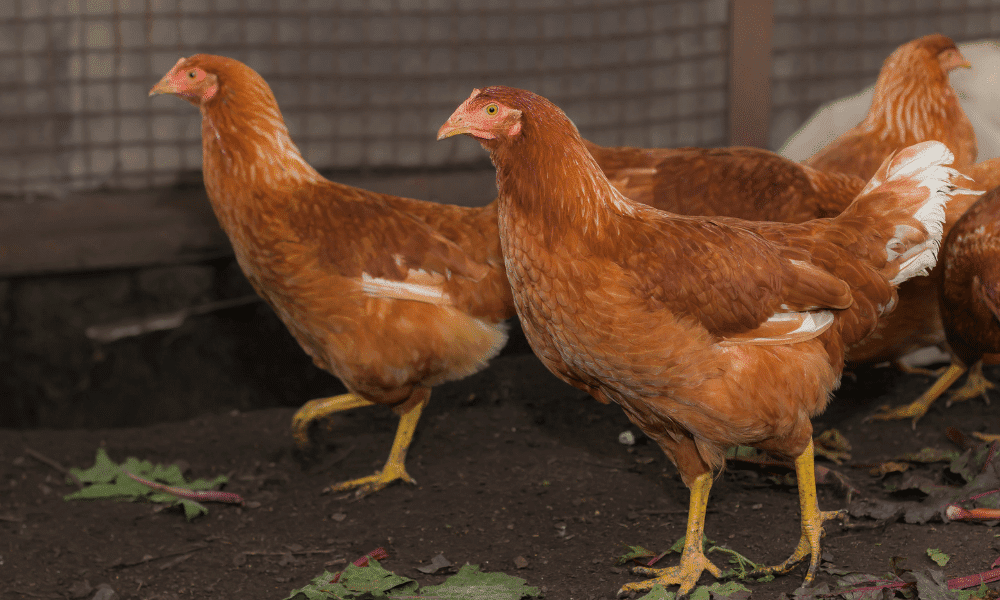 Believe it or not, there are actually some chicken breeds and hybrids that are classified as dual purpose. This means they can be raised for their meat or for their egg-laying.

Some of these breeds are actually highly sought after, like the Buff Orpington, Plymouth Rock, or New Hampshire Red chickens.

This is so that a chicken owner can experience the joys of raising chickens, collecting their eggs, and also processing their chickens when they become a little older.

Although raising chickens for their meat isn’t for everybody, there are those who do it for self-sustainable reasons and who like the ability to get chickens for both purposes.

The Life Of Broiler Chickens

Moving from the backyard environment to a commercial farm, it’s clear that broiler chickens simply don’t get the chance to lay eggs. Here’s the life of a typical broiler chicken, from hatching to processing.

The chosen breeds fertilized chicken eggs are placed in an incubator, where the atmosphere and temperatures are carefully regulated.

The eggs hatch after roughly21 days, and the chicks emerge from their shells. They’re then immunized against a variety of diseases before being transported to the farm.

Day-old broiler chicks reach the farm where they’ll be kept for several weeks until they reach market age and weight. Although there is a constant debate on just how much space, and what size coop you need for chickens, in general conditions are only getting more ethical and better overall.

When broiler chickens reach market weight, they’re captured, and then the chickens are transported to a slaughterhouse.

The majority of broiler chickens reach that weight between five and seven weeks of age. However, some broiler breeds can take up to 12 weeks to reach the desired weight.

Can You Raise Broiler Chickens In Your Backyard?

You absolutely can raise broiler chickens in the comfort of your backyard, just in the same way as you keep egg-laying backyard chickens.

This was an extremely popular option for rural country folks to do in the old days and is still done to this day.

Raising broiler chickens can be just as fulfilling as raising egg layers. Although you do need to have a slightly different mindset and be able to take the necessary actions to process your chickens humanely.

In terms of how to raise your broiler chickens in your backyard, well, ideally you will raise them just like you would with egg layers. A healthy diet, a good-sized and well-protected coop, and as much free-range time as you can.

Just to be clear: broiler chickens can lay eggs, but are usually processed before they fully mature, and thus never get the chance to lay eggs.

If you do keep a broiler chicken long enough you’ll notice it starts laying just as any other hen would. Depending on the breed you could expect between 100-150 eggs from them each per year.

Keep in mind, usually, broiler chickens are hybrids specifically bred for quick and healthy development, but can have long-term issues due to their rapid development, and they may not have the temperament as other hybrid chickens bred for egg-laying and calm manners.