Do Chickens Have Hair? (A Closer Look At Chicken Feathers)

Chickens have feathers on their head, body, wings, belly, legs, pretty much everywhere on their bodies. But, when you take a closer look you can see that these feathers all don’t look the same. Some appear like other birds’ feathers, some much smaller and thinner, and some are long with hardly any ‘feather’ on them.

It’s usually these smaller and thinner feathers that cause a bit of confusion, and they can often be seen on chicken wings, appearing exactly like little hairs.

Do Chickens Have Hair?

To set the record straight, no chickens do not have hair. But, they do have a handful of different types of feathers, some of which do look like hair which is why the question is raised in the first place.

I mean, the composition of chicken feathers is pretty similar to hair too, both being made from keratin. Plus if you’ve ever had chicken wings, you may have noticed a few very small ‘hair-like’ follicles on the skin.

So, although there are plenty of reasons you would think chickens have hair, they simply don’t. Chickens have feathers, and these feathers are just not quite the same in terms of make-up and purpose.

So, whenever you are discussing a topic involving chicken’s plumage, it’s best to refer to it as feathers rather than hair!

Chickens Plumage: What Are the Functions Of Each Feather? 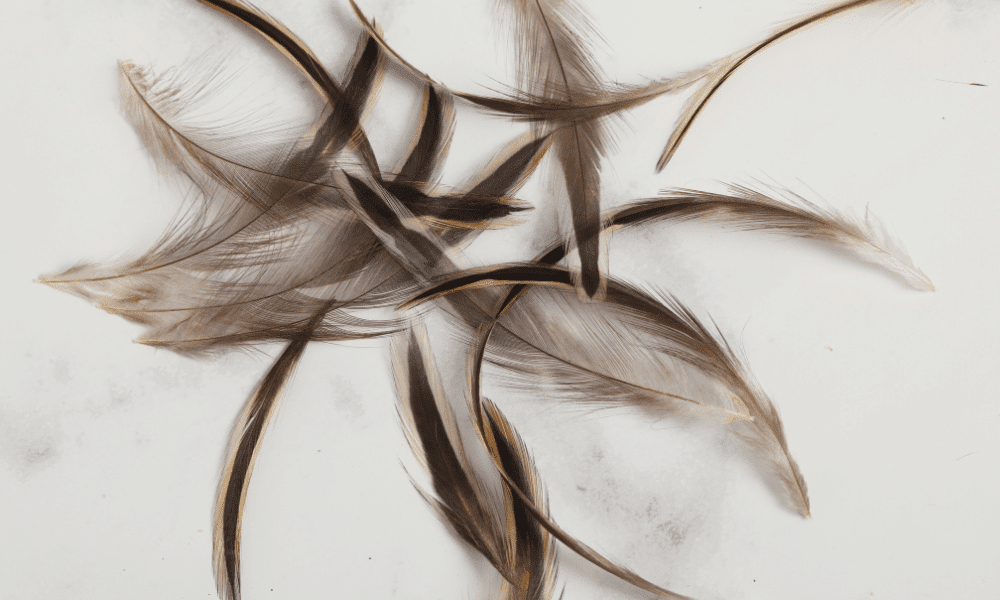 It’s easy to think that chicken feathers are all the same, but in fact, chickens have four main types of feathers, plus a few more classifications, each type with its own unique function.

So, here are the main types of chicken feathers, what they look like, and what purpose they serve for our backyard chooks.

Contour feathers help you distinguish between different chicken breeds. They’re the outer layer of feathers on the chicken body also covering the wings and tail.

The structure of contour feathers can change from one breed to another giving them their unique colors and shapes.

These contour feathers are what give some chickens their remarkable colors and styles, from the Polish Chicken to an Easter Egger, to Silkies, to Red Rangers or ISA Browns.

Down feathers are the feathers you see on a baby chick. But, they’re also found on adult chicken abdomens under the exterior layer of feathers.

This type of feather protects the chicken against cold temperatures to stop your chickens from getting too cold. They’re like a feathery layer for pure insulation.

Funnily enough, chickens will eat these feathers if they fall to the ground, as they’re full of protein. This can often be an indication of a deficiency.

Hackles are found on the neck and saddle of a chicken. They’re usually a different color than the rest of the feathers on the body. They stand up when the chicken is angry or defensive to appear larger and more threatening.

In other mammals such as dogs, hackles exist for the same purpose, except of course they are made of hair rather than feathers.

Filoplumes are incredibly unique, as they are long and thin with only a few barbs on the end of them, certainly not like a normal typical feather!

These are found between contour feathers. Their main purpose is to fill the gap between all the other feathers, creating further insulation and maintaining the smooth appearance of the chicken.

They’re the outer flight feathers and are the largest and strongest. They’re found at the end of each wing. Although chickens can’t fly, these feathers are thought to have allowed previous descendants to do so.

These are the inner flight feathers. They’re found behind the primaries. They’re responsible for lifting the chicken while soaring, or at the very least when your chickens jump!

Chickens lose feathers, but not necessarily like humans lose hair. The main cause of feather loss is molting.

Mature chickens usually molt once a year in the fall. During this process, they lose most of their feathers. During this time laying hens will often stop laying, or lay less frequently as they are keeping some protein for hair growth.

Other causes that can cause feather loss include:

One of the most common findings that beg the question “do chickens have hair?” is that when you are just about to dig into a nice chicken wing you notice a few very thin and subtle hairs poking out through the chicken skin.

To be clear, these little hairs on the skin of your chicken meat is not actually hair but really are a small filoplume. Eating these types of feathers is completely harmless, and it’s normal for the odd processed meat chicken to still have some on their skin. Some people simply get put off or grossed out by them.

If however, it’s very clear that they are feathers then you may want to go to extra lengths to remove them before chowing down.

While chickens don’t have hair, their feathers can quite easily look like hair in some cases, plus they are made very similar and are pretty much the avian equivalent.

One of the feathers, the filoplume, looks so similar to a hair that it’s commonly mistaken. Particularly as it’s often accidentally missed when the bird is being processed, so is left on the skin of chicken wings or chicken legs often.

But despite all their similarities, hair and feathers aren’t the same, and there are actually four main varieties of chicken feathers, all with slightly varying purposes.

If you love a chicken’s plumage, check out these afro chickens!