Do Chickens Throw Up Or Vomit? What It Means

Whether you’ve just seen liquid coming from your chicken’s beak, or you’ve simply seen your chicken do that distinct ‘throw-up’ like action, you may be curious if chickens can throw up or vomit.

Throwing up food or fluid is never a good sign in the animal kingdom (well, most of the time). So, it’s normal if you feel a bit uneasy about your chicken throwing up.

Here’s whether chickens actually throw up or vomit, what it can mean, and what you can do to help your chooks!

Do Chickens Throw Up?

To be clear, the digestive system of a chicken is a lot different than that of humans or other mammals. Instead of food simply entering the stomach and being digested by stomach acid, the food chickens eat first enters the crop, a small spherical area located to the right of a chicken’s chest.

The purpose of the crop is simply to store food, before moving it to the gizzards where it can be digested. The gizzard works similar to the stomach, but it’s more mechanical. The gizzard works to break down the food into smaller particles for further digestion down the track.

So, because of the various different parts of a chicken’s digestive system, it’s no surprise that chickens throw up differently. They can’t simply contract the abdomen and diaphragm to push out the contents of their stomachs.

So, chickens can throw up, but it’s normally due to a problem occurring in their crop rather than their stomach and it will simply seep out of their beaks rather than come out all at once.

Here are the most common reasons your chicken is throwing up or vomiting, 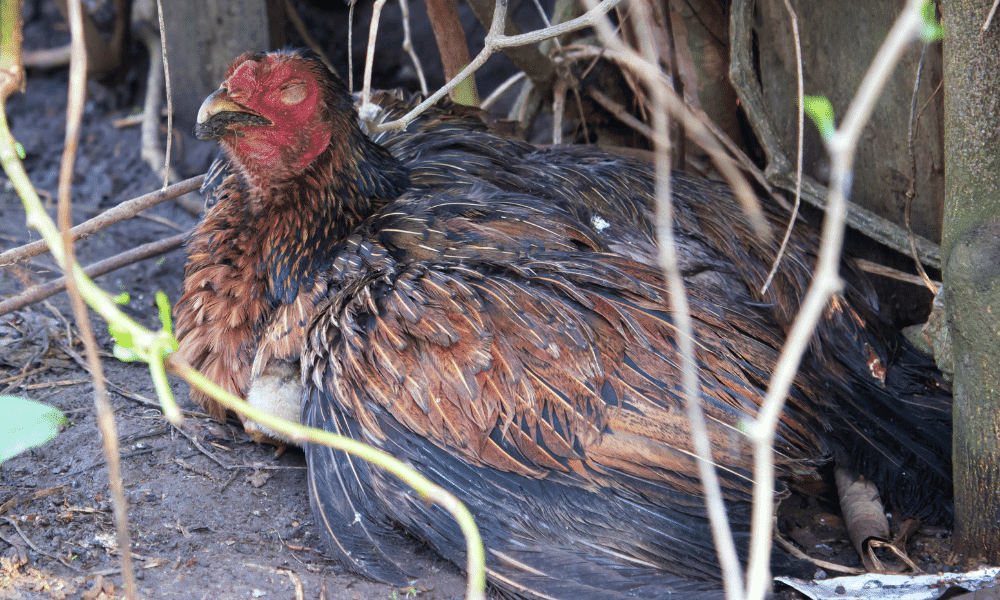 This is a disease that both humans and animals are prone to. Ascites is a non-inflammatory fluid accumulation in one or more abdominal areas. The fluid may contain clots of yellow substances.

So, when this fluid begins to come out, the most obvious path is through the chicken’s beaks.

Although the fluid isn’t ‘thrown-up’ like you would expect, it can seep out of the beak in some cases.

Broiler chickens are particularly prone to it since they are fattened, become overweight, and are grown as quickly as possible for their meat.

When the crop fails to empty and clear properly, food can become stuck in the chicken’s crop. When this happens for an extended period of time, the contents of the crop can begin to ferment and cause a yeast infection and a sour-smelling fluid to build up. As a result, the Candida albicans yeast grows, resulting in a highly nasty yeast infection.

It’s a common problem that affects backyard chicken flocks all around the world and can be caused by chickens eating moldy food, eating too much tough grass or some types of hay, infection, parasites, or injury.

Sour crop is one of the most common reasons it looks like your chicken has vomited or thrown up.

Crop impaction occurs when your chickens have eaten something that is simply too big or oddly shaped. Unlike sour crop where food begins to ferment and cause a yeast infection, a crop impaction is when the food actually causes a blockage.

This impaction may result in some leakage from the beak of the chicken as it tries to readjust its crop, which appears like the chicken is vomiting.

Normally, a chicken is able to unblock the crop impaction themselves eventually, but in severe cases, it can cause harm to your chicken or even be fatal.

Crop impactions can happen when there are indigestible foreign substances present, such as:

Chickens drink by dipping their beaks into the water and relying on gravity to get the water down, which is why you see them tilt their head up. As a result, some water will pour out of the beak when they return to a normal position.

Chickens have tongues, but they don’t have the same range of motion as us and don’t gulp down liquids the same way humans do. So the water doesn’t always make it all the way down.

This can appear that your chickens are throwing up water as they try to drink it, but it’s completely normal and doesn’t pose any type of risk.

What To Do If Your Chickens Are Vomiting

Recalling that chickens can’t vomit as we do, so if you see any fluid coming out of their beaks it’s a sign that something is definitely wrong, as it’s essentially just excess fluid they can’t get rid of.

If your chicken’s crop looks enlarged or inflamed, and you suspect they have a sour crop or a crop impaction then you can simply softly massage it throughout the day to encourage movement. At the same time it’s best to avoid giving your chicken any more food for at least 12 hours, and only a little water when they’re thirsty which can help loosen things.

Check on your chicken every three hours to see how the crop is doing. If it’s slowly getting smaller or flatter then things are working, and continue massaging until the crop is empty. You’ll know it’s ready when it’s no longer bulging out and doesn’t feel like a small ball, but rather soft and malleable.

This often does help, and you’ll see your chickens return to their normal selves soon enough. However, if this massaging doesn’t do the trick, then it may be caused by another infection, parasite, or illness. In this case, it’s best to make an appointment with your local vet so they can give a specific diagnosis and prescribe medication if necessary.

If your chicken looks well and truly ill, then you can simply call straight into the vet rather than trying to massage their crop – it’s better to be safe after all.

Why Does It Look Like My Chicken Is Throwing Up

You see, chickens will make a distinct ‘yawning’ or ‘throwing up’ like motion where they open their beaks wide and extend their necks out. This isn’t actually throwing up, and this is actually a completely normal occurrence.

This motion is actually simply to allow the chickens to move food from their crop to their gizzards for digestion. It can also be to simply adjust the food in their crop, in case it’s piling up or stuck

So, although chickens can’t throw up the contents of their stomachs as humans can, they can still have liquid expelled from their beaks.

If they do, then it’s essential that you check on them to identify if it’s a blockage or problem in the crop, or if it’s due to other sicknesses.

To be safe, it’s always best to consult a vet for options, but you can also try fasting your chicken and massaging their crop to encourage the contents to move.