Every chicken breed has its own quirks and advantages. Some are known for their incredible egg-laying abilities, others for their unique colors and plumage.

Out of all the best egg-laying hens, Golden Comets and ISA Browns are up there, being known for their egg-laying capabilities and good temperament. In fact, both of these sex-link chickens have been bred through the ages for these purposes exactly.

These breeds of chickens make for perfect additions to a backyard farm, where you want to enjoy fluffy and feathery companions as well as gather eggs on a daily basis.

But, being so similar, how do you actually tell the difference? Here is the full breakdown of Golden Comet chickens vs. ISA Brown chickens.

What Are Hybrid Chickens?

Hybrid or sex-link chickens are those that are produced mainly for egg production. They’re bred by crossing two pure-bred chickens, which then creates a generation with the parent breeds’ best characteristics.

Golden comets, for example, take their characteristics from their pure-bred parents. They’re as friendly as the Rhode Island Reds, and they lay their eggs early like the White Leghorns.

Both Golden Comets and ISA Brown Chickens are hybrid chickens, both selectively bred through the ages to have incredibly docile temperaments and great egg production both in size, volume, and laying age. Other hybrid chickens such as the Red Ranger Chicken, are bred for their growth, as dual-purpose chickens, Buff Orpington’s for their size and laying, and Cinnamon Queens for a bit of everything. 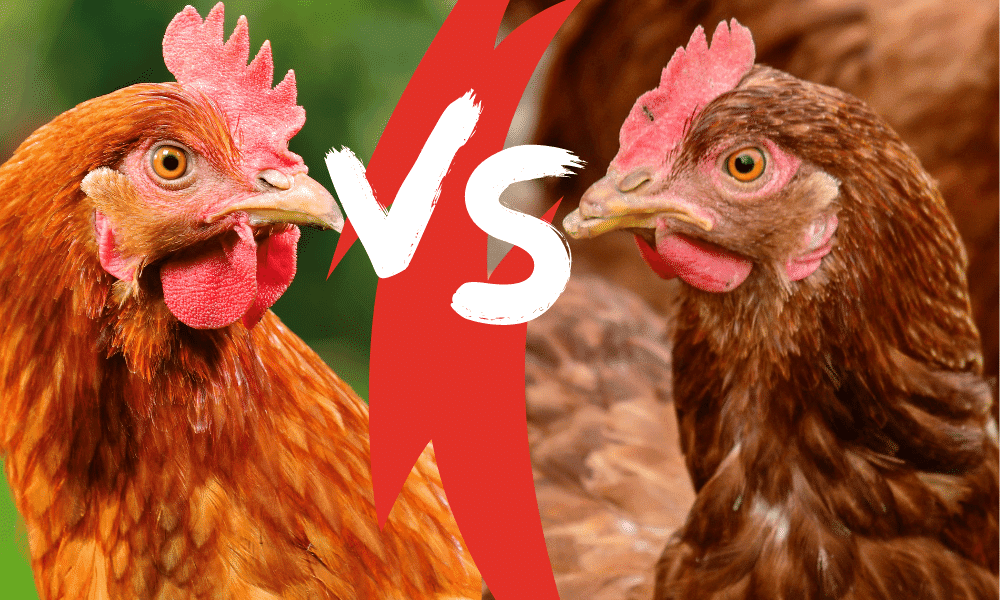 Golden Comets and ISA Brown chickens are both hybrid chickens and visually appear similar. They also have a very similar, calm temperament, and are great around families and young children. Both breeds are known to lay almost every day and are similar in size and weight.

But, despite all their similarities, there are some notable differences too. Here is the full breakdown of Golden Comet chickens vs. ISA Brown chickens.

Temperament is extremely important in chickens, as it directs the way you’ll be interacting with your chickens for the life of the flock. For example, housing docile chickens are much better in a family environment, so young children can get up close and personal without the risk of being attacked!

Both Golden Comets and ISA Browns are known to keep their temper and are very affectionate compared to other varieties. Of course, this also comes down to the individual chicken and how much they like their owner.

Temperament also comes down to whether chickens have imprinted on humans. So ask the hatchery if their chickens are hand-reared, as it makes a big difference to their behavior toward their owners!

As chicken owners, you need to mentally prepare for the loss of a chicken, as unfortunately they don’t live forever and can be particularly vulnerable creatures.

As a backyard farmer, you want your animals to last a lifetime, but all we can do is keep them safe and healthy and let life take its course.

For ISA Browns, the average lifespan is roughly three to five years, in part due to their relentless egg-laying abilities taking a toll on their bodies quicker than other breeds. But, depending on their diet and conditions, they can live up to eight years.

Golden Comets tend to live between four to five years, however, they are prone to having reproductive organ issues and tremors due to the constant egg-laying. This can make it tough in their later years.

Both of these chickens tend to lay eggs for between 2-3 years depending on their living conditions and diets. 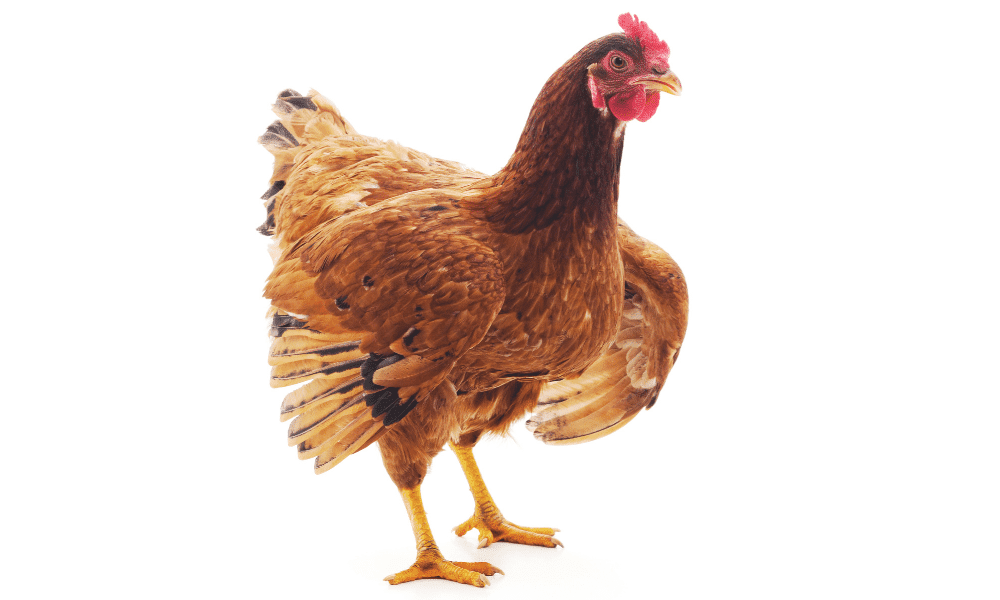 Both breeds are pretty much identical in size and shape. A normal healthy adult ISA Brown or Golden Comet also weighs around 4 pounds. In comparison to other chicken breeds, they are about in the middle, larger than bantam breeds, but smaller than some others too. So, both chickens won’t be able to fly higher than about 4 feet.

Both birds look very similar to one another. They both sport a rusty-brown color, white speckles, and alabaster-white tails.

They also have the same comb-type: single.

This makes it rather difficult to tell them apart visually, but they are both beautiful chooks.

Both the Golden Comet and the ISA Brown are highly sought after for their egg-bearing capacity. Both lay a lot of eggs during their first year of maturity, and continue at a frequent pace of roughly 6 eggs a week for 2-3 years.

Both chickens start laying between 5-6 months old. Once they get the hang of it, they will continuously lay, even throughout winter.

Although very similar, ISA Browns are thought to lay slightly more eggs than the Golden Comet, at about 300-350 eggs a year. the ISA Brown eggs are often a little bigger too and are brown in color.

ISA Brown and Golden Comet roosters come out as a completely different color when they hatch, being white and spotty rather than gold and brown.

Both of these hybrid breeds are capable of producing roosters, but because they are mainly bred for their egg-producing capabilities you’ll normally only find female chicks at hatcheries.

Both ISA Browns and Golden Comets are known to be cold-hardy, being able to withstand the harsh cold temperature of winter. Of course, it’s still important to take extra care of them during colder temperatures.

For example, although chickens are OK to stay out in the rain if it’s a particularly cold day you want to ensure they can properly dry off in a sheltered and dry coop to avoid your chickens developing unnecessary illness from the cold.

If you do notice your chickens are cold, make sure they are eating enough protein and energy-rich foods, have a sheltered and warm coop and stay as dry as possible.

How To Breed Golden Comets And ISA Browns? 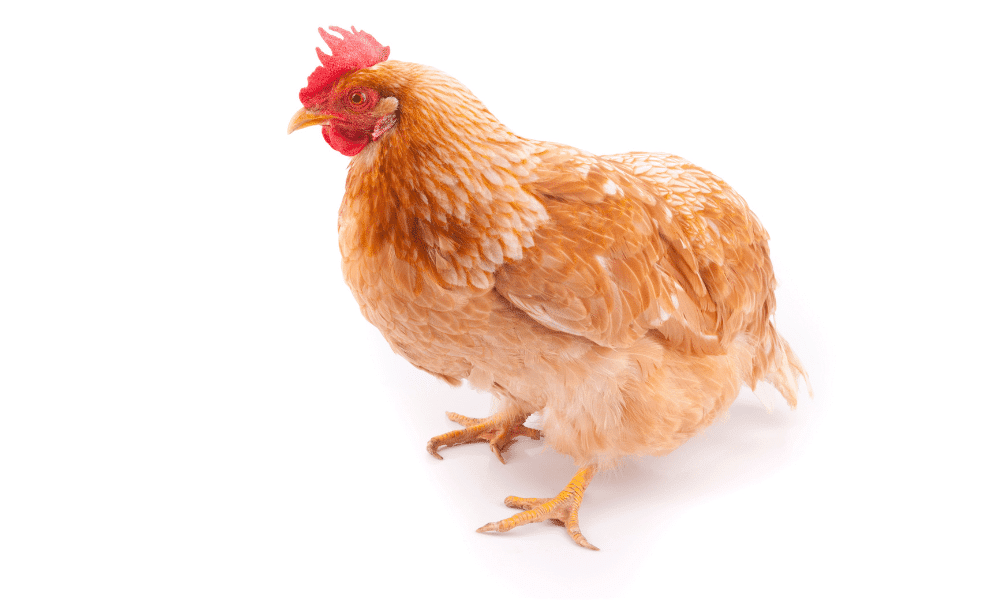 It’s widely known that hybrid birds don’t produce chicks with the same characteristics, and that breeding two sex-linked chicken isn’t the best choice for the next generation down, as they usually end up with health complications. If you want another hybrid, you cross the pure breeds that originally made their genetic makeup.

So, if you want to breed Golden Comet chickens, you’ll have to cross the Rhode Island Reds and White Leghorns.

ISA Browns, though, are impossible to reproduce. There’s some speculation about their genetic mix, but no one knows for sure.

The genetic mix of ISA browns is guarded and, in fact, copyrighted by the “ISA”, which stands for Institut de Selection Animale. The ISA is the party that developed the back breed in 1978.

It’s easier to get a hold of the Golden Comet than the ISA Brown. But, ISA Browns are not impossible to find, you’ll just have to visit a select hatchery that specializes in ISA Brown.

The jury’s out, but unfortunately, there is no verdict. Both these chicken breeds are perfect for a backyard farm that wants affectionate, curious, and high egg-yielding chickens.

It really does come down to your preference and I guarantee you’ll love owning either of these chickens just as much as the others.

I’ve had both in my flocks in the past and I can vouch for each of them.