How Many Feathers Does A Chicken Have (& Grow Per Year)

Why do chickens have so many of these anyway? They can’t even fly properly!

There’s no doubt that chickens have thousands of feathers, but how many do they actually have?

How Many Feathers Does A Chicken Have? 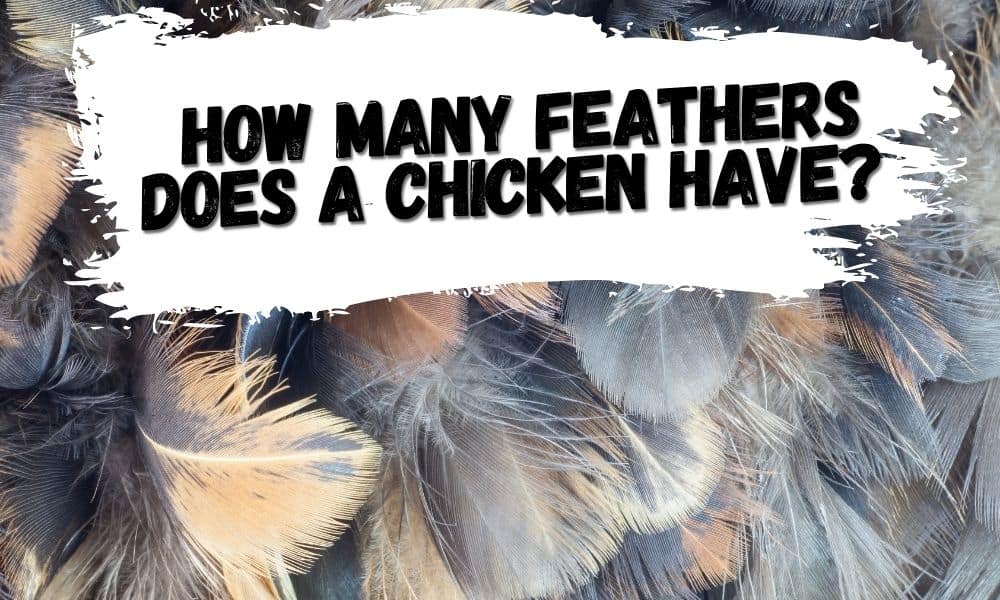 There are a few good ways to estimate how many feathers a chicken actually has without physically counting them all!

For one, you can take the weight of a chicken before and after processing (where the feathers are removed), then divide the difference by the weight of a single chicken feather (0.000289 ounces).

Is this extremely methodical? Yes. Is it at all accurate? Kind of.

Another approach that chicken researchers and experts have done is to estimate how many of each type of feather a chicken has in order to come up with a grand total, based on physical examinations and body weight percentages.

All in all, the best estimate using all these tactics is that a chicken has between 6,000-10,000 feathers in total.

Of course, this can depend on the size and breed of the chicken too.

It seems like a lot, but it’s quite close to other poultry too, for example, turkeys have between 5000-6000 feathers.

How Many Feathers Does A Chicken Grow Every Year?

If you’ve ever raised chickens you’ll be very well familiar with the chickens molting cycle. Believe me, it can look like a predator attack in the chicken coop with all the feathers everywhere.

Typically an adult chicken’s molting cycle happens once a year in the fall in preparation for the winter to come. This cycle can be over a quick few weeks, known as a “hard molt”, or over a few months, known as a “soft molt”.

But, whether it’s a hard molt over a short few weeks or a soft molt over a few months, most chickens will shed the majority of their old, used feathers, and regrow and replenish them.

Therefore, a chicken will have to regrow up to their entire feather count of 6,000-10,000 every year during this molting process.

It’s no wonder they slow down their egg production and require more protein during this time!

How Many Of Each Type Of Feather Do Chickens Have? 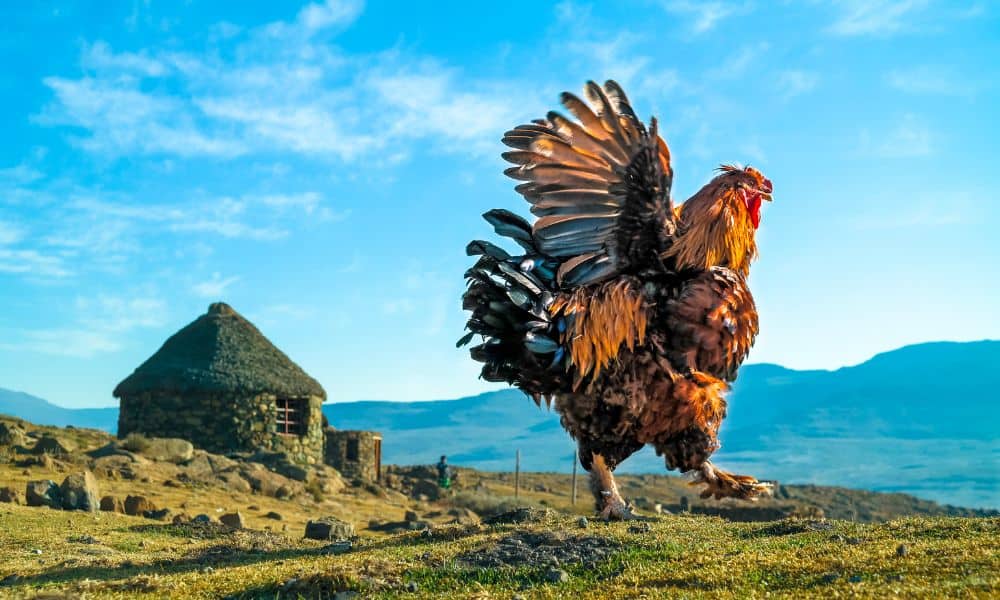 So now you might be wondering: out of all these thousands of chicken feathers, are most of them these tiny little hidden feathers?

You would think so, as how else are chickens able to have upwards of 6,000 feathers?

Well, as it turns out, this isn’t entirely true. Chickens have four main types of feathers: contour, down feathers, semiplumes, and filoplumes, and there’s a relatively even spread of all of them!

How Many Contour Feathers Do Chickens Have?

Contour feathers are the largest and most prominent chicken feathers there are. They are the ones you can easily see on a chicken’s wing and all over their bodies and tails.

As the name suggests, the contour feather gives the chicken its distinct shape and outline. Contour feathers have pretty thick shafts, with barbs branching off, giving the chook its vibrant and distinct colors, and are what is used mainly to distinguish one breed from another.

It’s estimated that chickens have between 1000-1500 contour feathers in total on their bodies, including their tail feathers and hackle feathers too.

How Many Down Feathers Do Chickens Have?

Down feathers, or plumules, are incredibly soft and fluffy. These types of feathers appear on baby chicks, even as soon as they hatch!

These dense down feathers act as insulators, protecting chickens from drafts, keeping them warm in the winter, and helping them regulate their body temperature!

Chickens have approximately 1000-2000 down feathers, being much smaller and covering most of the chicken’s body.

How Many Semiplume Feathers Do Chickens Have?

Semiplumes are quite short and wide and are mostly hidden under all of a chicken’s other feathers.

They act to fill the gap between the others to ensure there aren’t any spots left uncovered, helping with further insulation.

Although their small and are mainly unseen, they are just as important, and are in the thousands on any adult chicken!

How Many Filoplume Feathers Do Chickens Have?

Filoplumes are those tiny hair-like feathers that can be incredibly hard to see.

It’s funny, though, the function of filoplumes is a lot less clear than the other types of feathers.

It’s theorized that filoplumes have sensory functions and serve to transmit information about contour feathers’ location and movement.

It’s estimated that chickens have at least 3,000-4,000 filoplume feathers, if not more!

How Many Feathers Does A Baby Chick Have? 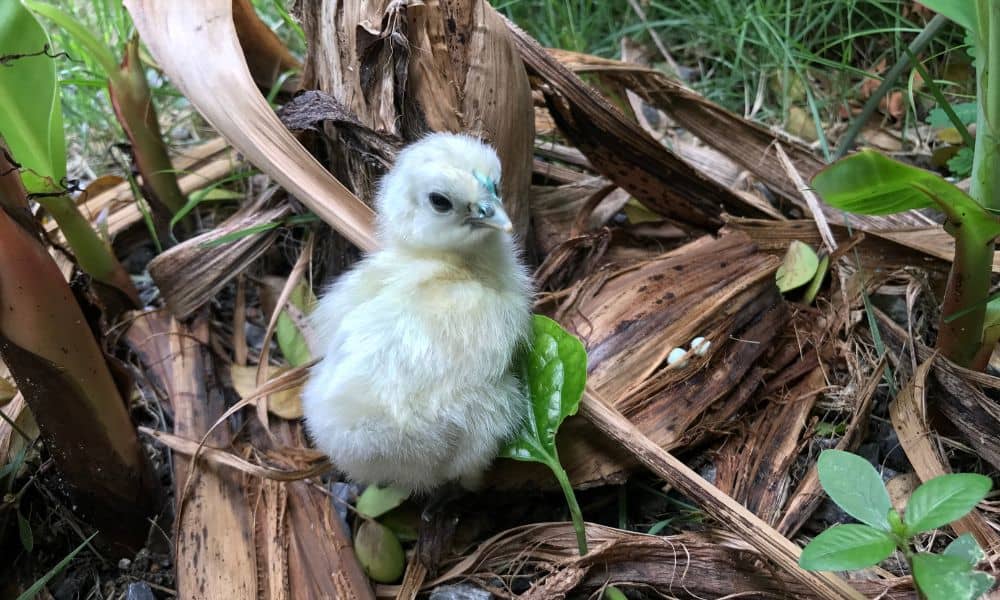 Baby chicken’s first feathers are kept until 6-8 days old. Although a baby chick may be born with only a hundred or so feathers, they quickly grow more after their first molt.

After their first molt, they grow their first juvenile feather coat that can total about 500-1000 feathers.

Finally, after about 12-14 weeks, baby chicks will shed their first juvenile feathers and grow out their first adult set, usually also containing their ornamental feathers.

From 14 weeks or more chickens will have grown most of their adult feathers, having thousands at this point!

Almost finished counting a chicken’s feathers? We have!

These feathers are replaced yearly when chickens complete their molt, where they have to shed and regrow all of these in a rather short amount of time!

Of course, the number of feathers any given chicken can have can depend on its breed, age, and size.

But, one thing is for sure, it’s in the thousands and you don’t want to be sitting there counting them individually!