How to Stop Noisy Chickens (For You & Your Neighbours!)

Most of us chicken owners will know firsthand just how noisy some chickens can be. Not even roosters, but hens. Particularly at 6 am in the morning when we are sleeping and they are ready to get out of the coop and forage!

Bless them, but when it’s every morning or if the neighbors start to make a fuss, you have to start thinking, is there a way to stop chickens being so noisy?

Here we go through why chickens are so loud in the morning, what you can do to encourage quiet behavior, and how to stop chickens from being so noisy for you and your neighbor’s sake!

Why Are Chickens So Loud In The Morning? 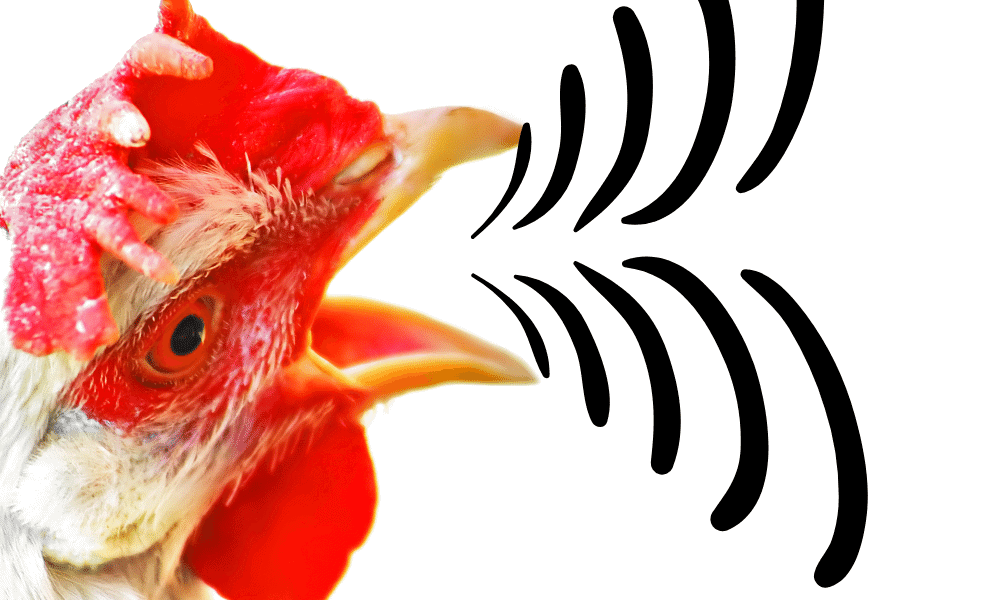 Roosters are known to be very loud at sunrise, but we backyard chicken owners who don’t have a rooster can also attest that hens can be just as vocal in the early mornings!

So, before we consider how to stop these chickens from being so noisy in the morning, it will help to understand just how noisy they can get and what causes them to get so loud in the morning.

There are 3 main reasons chickens get so loud in the morning, and each is observable in slightly different ways. So, you can work out why your chickens are being so loud, which will also help you brainstorm how to quiet them down.

The most common reason is referred to as the egg chorus, where a few or more of your chickens start repeatedly clucking and squawking, almost in a recognizable tune. The performance of the egg chorus means the chickens have either just laid an egg (in the last 60 minutes) or are preparing to lay an egg (in the next 60-120 minutes).

The second reason is when some of your chickens get impatient and want to get out of the coop to begin their daily foraging and get access to food and water. This one is very obvious, as when you approach the coop to let them out they all frantically running around at the door!

The last reason is in response to a predator or at least another animal. This is less common but can be caused by something as simple as other birds landing in the yard. This can turn into a daily occurrence as the morning is prime time for other birds to be up and about too.

How To Stop Chickens Being Noisy

Normally chickens chirps and clucks only reach about 60-70 decibels, which is the same amount as a normal human conversation. But, when it’s first thing in the morning and some of your hens are clucking wildly it certainly sounds a lot louder.

There are a few different things you can do to help quieten down your noisy chickens, depending on why they are being so loud:

Chickens are at their loudest during the morning, whether they are communicating they want food or water, or simply if they want to start free-ranging and foraging. To stop them from being so noisy in the morning you can go out and open the coop at 5:30-6:30 am, just before the chickens begin their squawking and clucking.

If it’s safe to do so and your chicken run is predator-proof, if you don’t lock the chicken coop at night your chickens will be able to go into the run themselves in the morning, but may still want out into the yard.

Put Food & Water In Their Run

If your chickens are simply hungry or thirsty in the morning, they will vocalize their feelings, particularly if they learn that it leads to you coming out and tending to their needs!

So, a way to keep them quieter in the morning is to put a little bit of food in the feeder and put their water in their run. That way, when they wake up they will have access to breakfast earlier, and will satisfy them for a bit longer!

Condition Them To Be Quieter

There is a basic fundamental learning concept that can be used to encourage or discourage certain behaviors in most animals, even humans! This is referred to as conditioning and can be used to train your chickens.

This simple concept can be applied to teaching your chickens just about anything, including being quiet. However, instead of reinforcing your chicken with treats when they are quiet, you’ll have to discourage your chicken when it’s loud.

The simplest and most harmful way to your chickens is to spray them with water with a spray bottle if they start clucking loudly. Although, this is hard to do as you need to administer the punishment quickly enough after they’ve begun to be loud or they won’t make the connection.

Use An Automatic Coop Door

An automatic coop door can be programmed to open and close (and lock) at certain times of the day or night. If you’re getting tired of opening the coop in the early morning you can install one of these to do the job for you. It’s also very helpful if you’re going away for the night, so your chickens can continue their busy schedule without delays in the morning waiting for you to return!

How to Stop Noisy Chickens From Upsetting Your Neighbours

If your neighbors have complained or are getting upset about the noise that your chickens are making then you’ll need to get rid of the neighbors.

All joking aside, this is a more serious issue. If you’ve tried all the basics but nothing seems to be working, here are a few alternative methods to stop noisy chickens from upsetting your neighbors, so you and them can get a bit more peace, particularly in the mornings!

Placement Of Your Coop 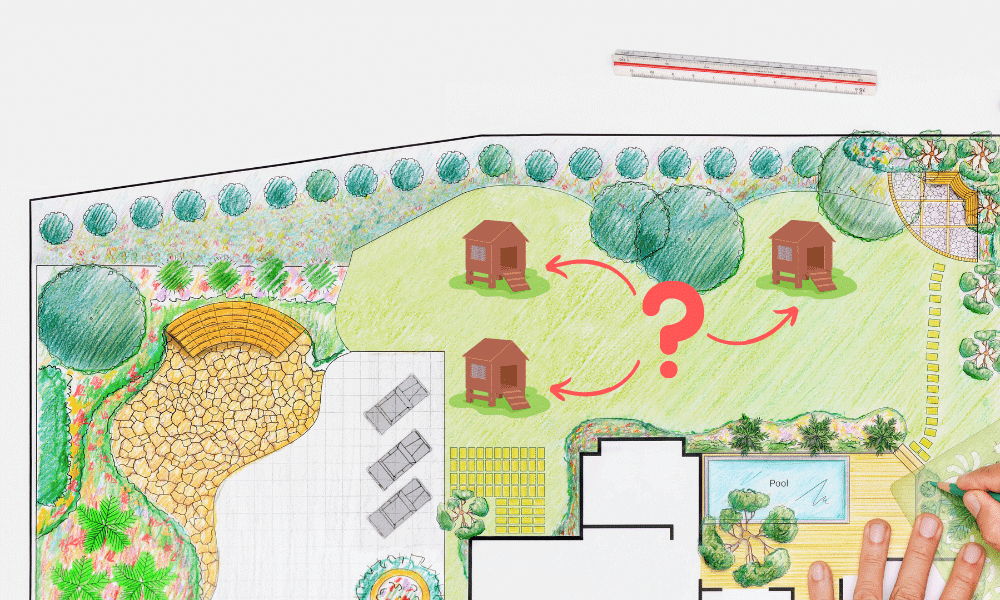 You’ll be surprised at how much of a difference a few feet can make when it comes to traveling noise. Simply by reconsidering the placement of your coop, you might find that the sound travels differently making it much less noisy for your neighbors, particularly if it’s against their fence!

If your coop is moveable, try a few different spots in the yard. If you can’t move your coop and you’re getting a bit concerned about the noise, you can construct a new temporary one on the other side of the yard and trial it out before committing to that spot.

This works particularly well as chickens are most noisy in the morning, and the placement of the coop could mean the clucks and chirps are carried in a different direction.

Hens are usually the loudest in the morning, either because of the renowned “egg chorus” where they cluck between 60 minutes before or after laying an egg, or because they want food, water, and out of the coop!

One sure way to keep your chickens quiet is simply to wake up early and let them out before they start making a racket. You should record when your chickens wake up and start clucking, then set an alarm for 15 minutes before then and go let them out. This will significantly quieten down your chickens for your neighbors, and make their loud obsessive clucking less frequent.

If you can’t commit to waking up every morning to let them out, you can look at installing an automatic coop door that opens at specific times in the morning, and locks at night to keep your bird safe and sound, and hopefully making less noise in the morning!

If you’re considering adding more chickens to your flock, as we all fantasize about on a daily basis, then you could consider only adding more quiet breeds of chickens. Although no chicken is going to be 100% silent, there are many common chicken breeds that are known to be much quieter, that chirp more often rather than cluck.

Some include Barred Rocks, Rhode Island Reds (or other reds), Isa Browns, Silkies, and Cochins. This doesn’t mean all of the chickens from this breed will be quiet, but it’s much more likely they will be compared to louder breeds like Orpingtons or Polish.

While you can use proactive methods like those mentioned above, if the noise isn’t of major concern then you can simply passively reduce the noise of your chickens.

Chickens are most noisy when they’re in their first stages of growth and after laying their first batch of eggs. Over time, they tend to mature and naturally become less rowdy and more relaxed. They’ll also become less anxious and set in their pecking order, which tends to quieten them down.

Another thing you can do over time is to alter their feeding times, providing more food before bed so they are less hungry in the morning. Over time your chickens won’t make as much noise in the morning, or it will be slightly delayed. But, by then you’ll be out of bed and ready to let them free range and forage.

There is no one way that is 100% effective in stopping noisy chickens, but, by understanding why they are being loud, you can use some key actions like waking up early to let them out, or installing an automatic coop door, and exploring feeding them later in the day so they aren’t as hungry in the mornings.

If your neighbors are giving you a bit of trouble, try talking to them to find a middle ground. Let them know you are working on it, and changing their behavior may take some time. Alternatively, you can try moving your coop, or setting one up further away from your neighbor’s property!