Is Hemp Bedding Safe For Chickens?

As a chicken owner, I’m constantly looking at ways I can improve my chicken’s wellbeing. After all, the happiest chickens give the best eggs.

When it comes to which bedding to use it’s hard to really know what a chicken prefers to squat on and lay their eggs, you can’t exactly ask them.

But, what you CAN do is look at which bedding provides the most sanitary, clean, and comfortable environment. So, if you’ve come across hemp bedding, or have heard it through the chicken community, here we sit down and ask the important questions.

Here’s whether hemp bedding is safe for chickens, what benefits it really has, and how often you need to change it.

Is Hemp Bedding Safe For Chickens?

The first question you should ask yourself before changing any bedding, flooring, or material in your chicken coop or run is: is this safe?

Particularly when it comes to animal bedding, as it’s been recently found out that some materials have unwanted side effects that are actually harmful to chickens.

Although it needs to be studied further, it’s been thought that cedar and pine wood shavings can actually be harmful to chickens, potentially leading to both respiratory and liver issues due to the compounds found in the wood.

So, how does hemp bedding stack up within the mix?

Well, so far all signs say that hemp bedding is safe for chickens, being included in their diets through hemp seed, and well as in their runs and coops as animal bedding.

So, not only is it safe but it’s rising in popularity due to its unique composition being super absorbent and reducing odors, even more so than wood shavings, straw, or pine needles. Plus it’s a low-cost option that’s comfortable for your chickens – so really it’s a win-win. 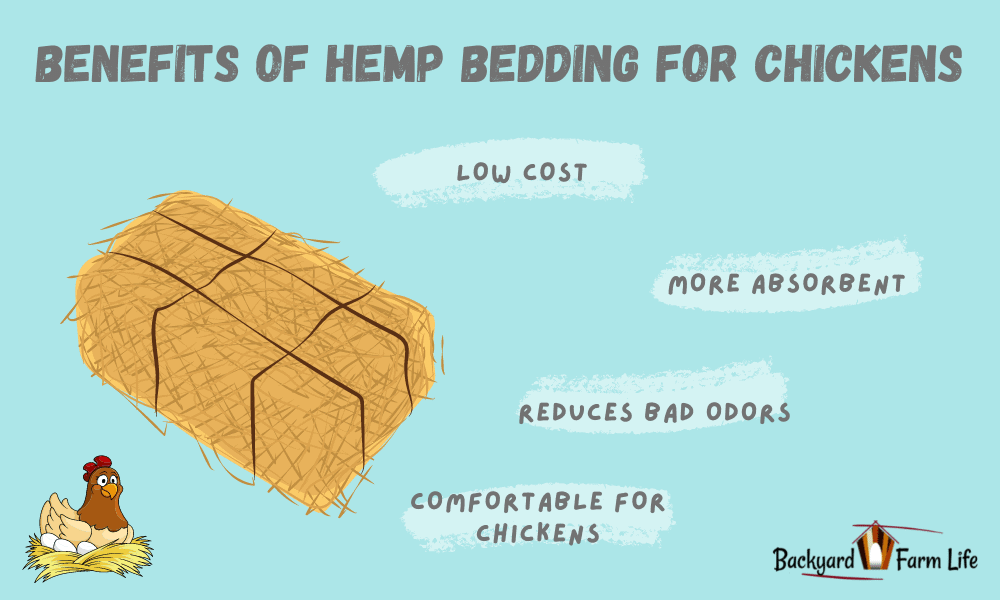 Currently, the most popular bedding for chickens by far is wood shavings, closely followed by straw. Wood shavings have been used down the ages, it’s cheap and effective.

But, not all woods are made equal.

Not only are some wood shavings potentially toxic for chickens, but they all differ in absorbency, odor prevention, cost, and cleanliness.

As it turns out, hemp bedding, being hemp shavings, is actually market-leading when it comes to everything you want in chicken bedding. Here are the main benefits of using hemp bedding for your chickens.

One vulnerability when it comes to chickens, is they are quite susceptible to respiratory disease.

So, when it comes to choosing your animal bedding, you want something that is completely non-toxic, and one that reduces any small, breathable particles like compounds or dust.

We’ve already established that there is no evidence that hemp is toxic to chickens, but it’s also known to reduce dust formation and accumulation too. This is one of the leading reasons it’s chosen as animal bedding for chickens and other barnyard animals too!

Only chicken owners will know just how bad an accumulation of chicken poop can smell. It’s quite a unique, ammonia-heavy stench.

Because chicken poop contains a lot of fluids, its decomposition happens at a much slower rate. The slower the process, the more the bad smell will hang around and build up.

Luckily, the super absorbency of hemp bedding genuinely draws out the moisture from chicken poop and distributes it amongst the bedding. This is one of the leading reasons for using wood shavings for bedding, but hemp does it better!

To further reduce odors, if you are using hemp bedding in your run, it’s best to use gravel as a mid-layer with the hemp bedding on top. This helps filter the moisture down through the bedding, through the gravel, and into the ground — keeping things a little cleaner.

Because of how absorbent hemp is, you’ll find any potential droppings much drier than with other beddings. This allows you to very easily and simply replace the bedding, with no smearing and fewer leftovers remaining.

No one wants to be changing their bedding from their nesting boxes every week, but if you’re using inadequate bedding you’ll find that it’s necessary. This is because the droppings don’t tend to be absorbed as effectively, tending to produce more ammonia smell and remain damp and unhygienic.

Hemp bedding actively draws moisture from all droppings, staying more absorbent longer.  This may even stop your chickens from kicking their bedding out of the nesting box too, as it’s cleaner for longer!

Because of how easily hemp is grown and processed, you’ll often find that hemp bedding is about 20% cheaper than other shavings or hay available. Remember, because it also lasts a bit longer and you don’t need to change it as often that means you’ll also be getting more bang for your buck-buck-bucks (chicken language).

How Often To Change Hemp Bedding?

Even though hemp bedding has its benefits, it still needs to be changed to maximize hygiene and reduce any chance of infection, etc. in your chicken coop or run.

So, with that in mind, how often you’ll need to change your hemp bedding will depend on which area of the coop it’s in, nesting box vs. run/coop floor, and also how many chickens you have.

However, as a general rule of thumb, it’s time to change the hemp bedding when it’s beginning to clump together, looks visually moist, or if it generally looks heavily used.

If you are using it in a nesting box for a handful of hens, then you could be looking to change it every 2 to 3 weeks.

But, if you’re using it in the bottom of the coop, where your chickens roost or remain most of the time, then you should replace it every 2 weeks.

If it looks like it’s mostly used in one space more than the other, then you can always sweep or rake the droppings and dispose of them, and sprinkle some fresh hemp bedding on biweekly, allowing you to extend its life.

Any Downsides Of Hemp Bedding?

So, there is a clear argument that hemp bedding is up there, if not better than straw, hay, or other wood shavings, but it’s important to look at potential downsides too.

In all honesty, for adult chickens, things are looking great, but there are reports in younger chickens that the small fibers of hemp bedding can be mistaken as food by young chicks.

This obviously isn’t good, particularly if that bedding has absorbed moisture from droppings etc.

Furthermore, the fibers of hemp can occasionally get caught around their feet which is more of an annoyance for them, compared to larger and thicker shavings from pine, etc.

One further downside is that hemp bedding isn’t as commonly found as other sources of beddings. So, you’ll either have to find a place that stocks it regularly, or order it specially online!

Hemp beddings are good in terms of safety and practicality. Keep in mind that using them isn’t essential. If you’re using pine shavings or straw and they’re working for you, you don’t have to switch or upgrade all.

Consider if it’s right for your coop, or try it out and see just how satisfying it can be!