Minorca chickens aren’t your everyday, run-of-the-mill backyard chooks. No no.

These beautiful ornamental chickens are prized because of their amazing physical characteristics.

But they don’t pay their rent in their looks alone, they also lay large white eggs and are flock leaders, all pieced together with a beautiful temperament.

If you are curious about any aspect of the Minorca chicken, we’ve got you covered.

Here’s the Minorca chicken in all its glory, everything you need to know about Minorca hens and Minorca roosters, and how you can tell them apart too!

What Is A Minorca Chicken? 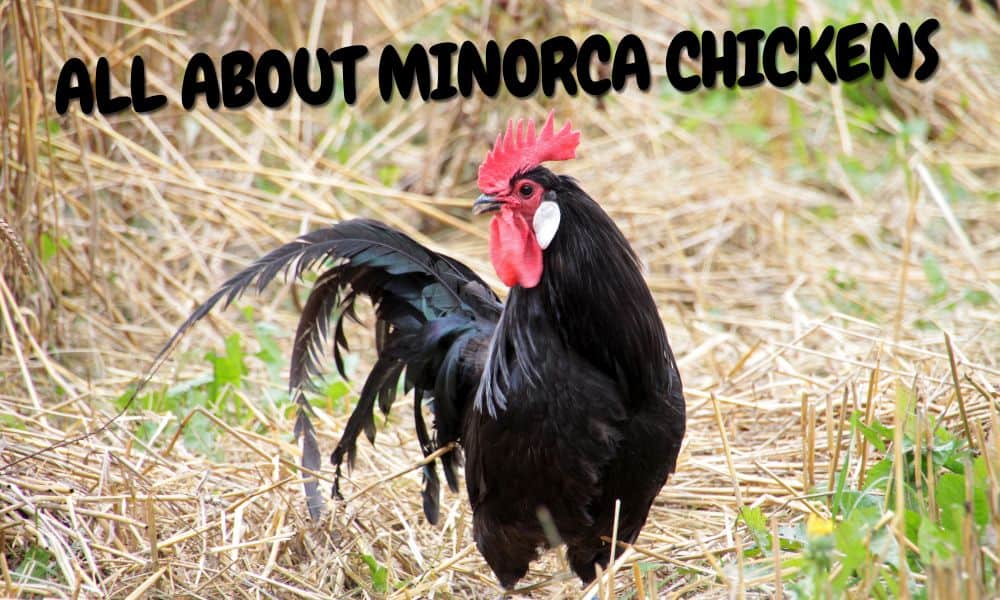 Sure, at first glance you may think the Minorca chicken is quite ordinary. But, as soon as you see those bright white earlobes…

But, this standout feature isn’t the only thing the Minorca chicken has going for it.

To get a better understanding of the Minorca chicken as a whole, here’s its origin, appearance, and temperament.

This breed dates all the way back to around the 1700s in the Mediterranean region. It got its name from the Spanish island called Minorca.

From the Island of the Minorca, Minorca chickens were transported to England and then to the United States.

Among the many Mediterranean breeds like Leghorns, Andalusians, Anconas, and many more, the Minorcas are considered one of the largest.

They weigh between six to nine pounds. However, despite their large size, they have a more narrow angular build.

The Minorcas also have long tails and black feathers with a greenish glow when lit by the sun. Truly stunning, really.

Furthermore, they have red faces, red combs, and red wattles, which is why they are sometimes referred to as Red-faced black chickens!

However, their most distinctive feature is their large white earlobes, appearing on both hens and roosters, but much larger on the roos!

Like most chicken breeds, Minorcas do well with people and don’t mind close contact – so long as they are raised around humans.

They are free-spirited creatures, always active, and love to free range and forage.

Minorca chickens aren’t known to be aggressive, but they can certainly hold their own. Because they are larger than many other chicken breeds they tend to end up at the higher end of the pecking order.

All About Minorca Hens Egg Laying 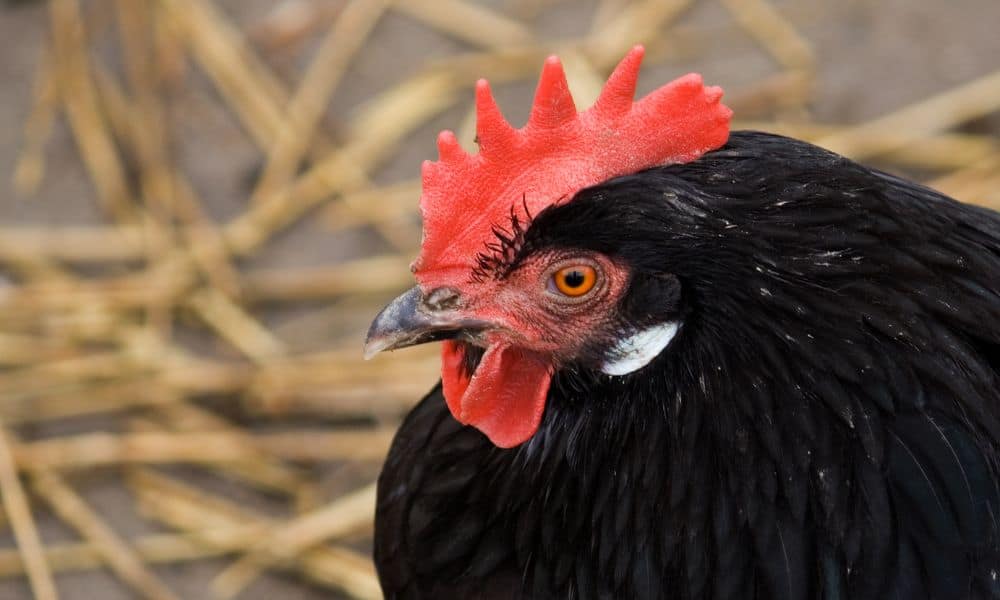 Let’s be honest, aside from their companionship, we raise chickens to collect our daily, delicious, fresh eggs.

So it’s natural that whenever we compare chooks we take a close look at their egg-laying capabilities.

After all, you don’t want to raise freeloaders!

Minorca chickens aren’t known to be incredible egg layers, like Rhode Island Reds or Golden Comets for example, which can lay 300+ eggs per year.

Instead, on average, Minorcas will lay between 120-150 large white eggs per year.

This is mainly because Minorcas can have a hard time laying throughout the whole year. They tend to go on a hiatus during colder months!

You can help your Minorca’s out by feeding them extra protein and fat in winter, from foods like scrambled eggs or even pork fat.

That said, the Minorca’s large egg size does somewhat compensate for the fewer eggs it produces!

Some chicken breeds are capable of laying eggs from as young as 16 weeks old.

But there are also those that take a little longer to reach maturity, laying from 24 weeks or more.

In the case of the Minorca, well, you’ll have to be a bit more patient.

This can even be longer if they reach this age during the colder months of winter.

However, from 30 weeks old you can expect your Minorca hens to be laying consistently. 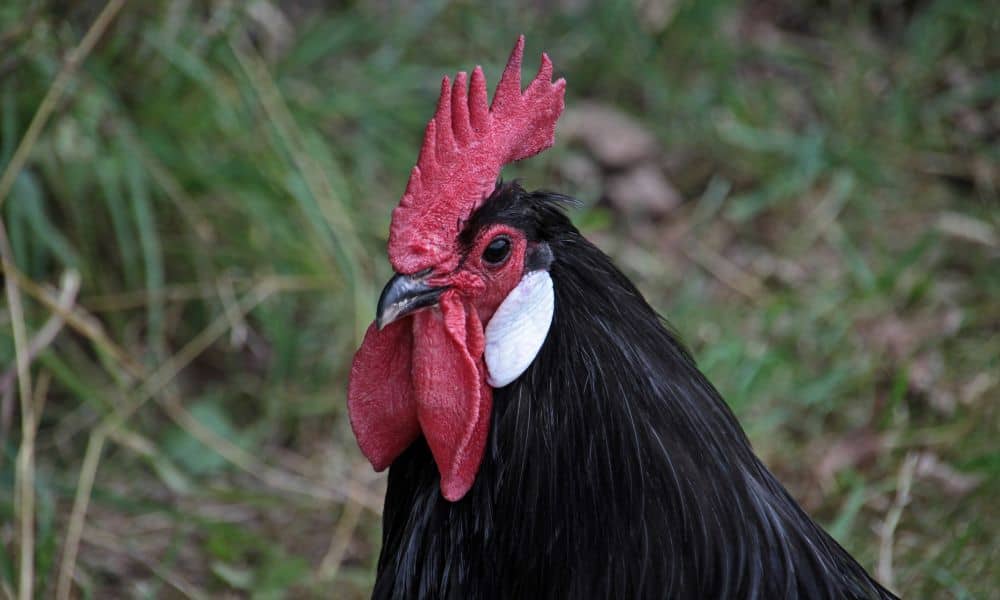 These magnificent, Minorca roosters may just be one of the most sought-after roosters of them all.

Not only do they have incredible lush, fluffy black tail feathers, but their earlobes are HUGE and white. They really do stand out.

The best part? Their larger size helps them defend their flock with ease, but they are otherwise very docile in nature.

Minorca roosters are NOT known to be aggressive towards their owners or other pets they have been raised around!

When Do Minorca Roosters Start Crowing?

Although it’s possible for a Minorca rooster to find its voice from as young as 16 weeks old, it’s more likely it will perform its full-grown crowing from 24 weeks onward.

If you’ve got other roosters in the flock, then your young Minorca rooster may suppress their crowing for a while longer, understanding they are not the alpha rooster!

But, if they are the only rooster in the flock you’ll likely hear them first thing in the morning, every morning!

How To Tell Minorca Hens From Roosters

At maturity, there are three main visual differences you can use to tell Minorca hens from Minorca roosters.

As baby chicks and young cockerels and pullets, you can look out for early comb and wattle development as a good indicator that it’s a rooster!

So there you have it. You’re now a fully-fledged Minorca chicken expert!

If you don’t own any Minorca chickens yet, I hope we’ve persuaded you to give them a go — they really are amazing creatures.

Their incredibly unique white earlobes really stand out in a flock and their temperament is wonderful for any backyard environment.

Sure, they don’t lay as many eggs as other chooks, but at least they’re large in size!