Polish chickens have one of the most gorgeous natural winter coats of all time. Complete with an afro, these stylish chickens lead the way in fabulousness.

Crested, laced, or frizzled, these chickens come in many different shapes and sizes, but all have a few key similarities which characterize them: their wicked hair-dos and beautiful plumage.

Still, when it comes to preparing how you are going to be raising your flock, it’s key to determine if you’ve got yourself hens or roosters.

So, to save you the guesswork, here are the main differences between Polish hens and roosters – from both an adult age and as baby chicks. 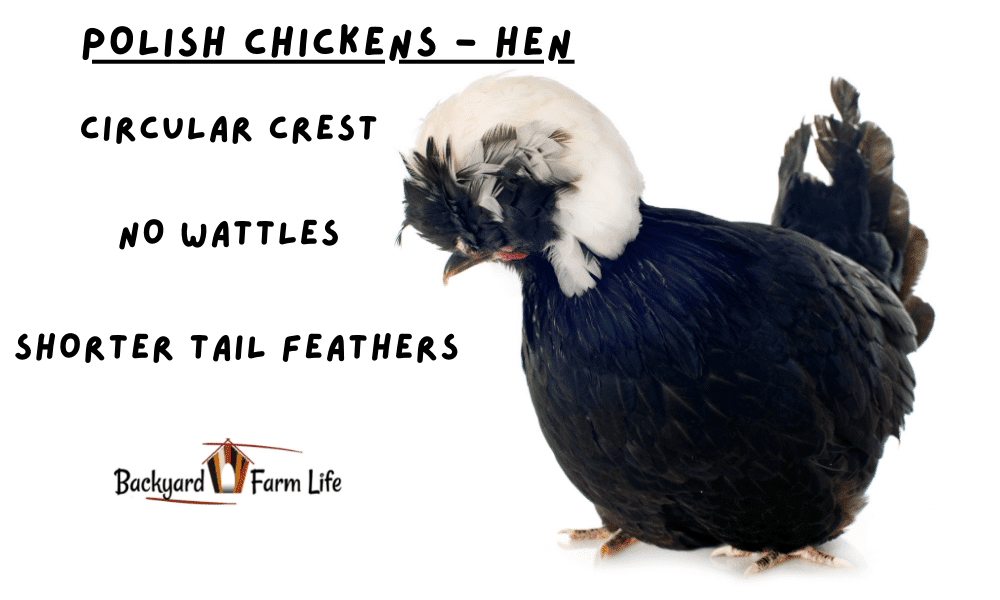 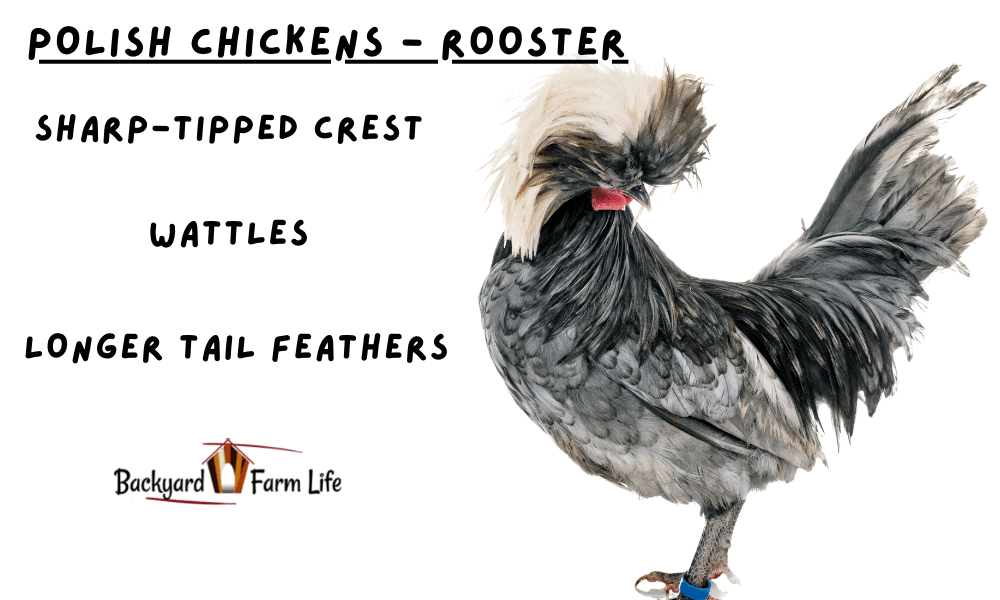 Polish chickens are most commonly bred and raised as show birds.  This includes both Polish hens and Polish roosters, both equally being stunning creatures.

Nonetheless, they DO NOT look identical. Some of the features are clearly those of a rooster, such as the overall size, wattles, and more extravagant plumage. But, there are some that are much more subtle too.

Here are all the characteristics that make up the differences between a Polish hen and a Polish rooster.

When you’re talking about mature Polish chickens, size is a clear indicator of whether you’ve got a rooster or a hen.

Although there’s not quite a large difference between the hen and rooster of say a Buff Orpington, Polish roosters are certainly roughly 20% bigger, weighing up to about six pounds.

Polish hens on the other hand have much more slender bodies, with longer legs and a narrow frame, weighing usually around four to five pounds.

Usually color is a great visual cue you can use to distinguish between a hen or rooster, like with ISA Brown hens & roosters, or Rhode Island Red hens & roosters. But, color won’t really help you with Polish chickens.

Both Polish roosters and hens come in a variety of colors, ten of which are recognized by the American Poultry Association (APA). Those include silver, gold, blue, white, and black. Among the rare color breeds is the Tolbunt Polish chicken.

The plumage is one give-away you can look for when trying to distinguish a Polish hen from a rooster.

That is, the rooster’s topknot is tousled, and has obvious sharp tips. Polish hens, on the other hand, have much sleeker crests that appear more like a bob. Some of them even look like “Karens”. Although, I wouldn’t want to make this association.

Roosters also have a much more distinct tail feather array, being much more bushy and voluminous. Polish hens have shorter tail feathers and appear much tamer.

Wattles are the dangly red things beneath a chicken’s beak. Just like with most chickens, a rooster’s wattles grow much larger than hens. Although Polish chickens don’t grow the biggest wattles of all time, the roosters are still much more noticeable than hens, just like with Ameraucana hens and roosters.

Along with being absolutely fabulous, Polish chickens are known for their friendly, gentle, and timid personalities. They are far from aggressive, although each chicken’s personality does differ.

Both Polish hens and roosters are brilliant around young families.

They are relatively quiet by nature, a similarity they share with Silkie chickens. Plus, being classified as a medium-sized chicken, they will only fly about 4 feet high too. These characteristics make them great for any kind of semi-suburban backyard. 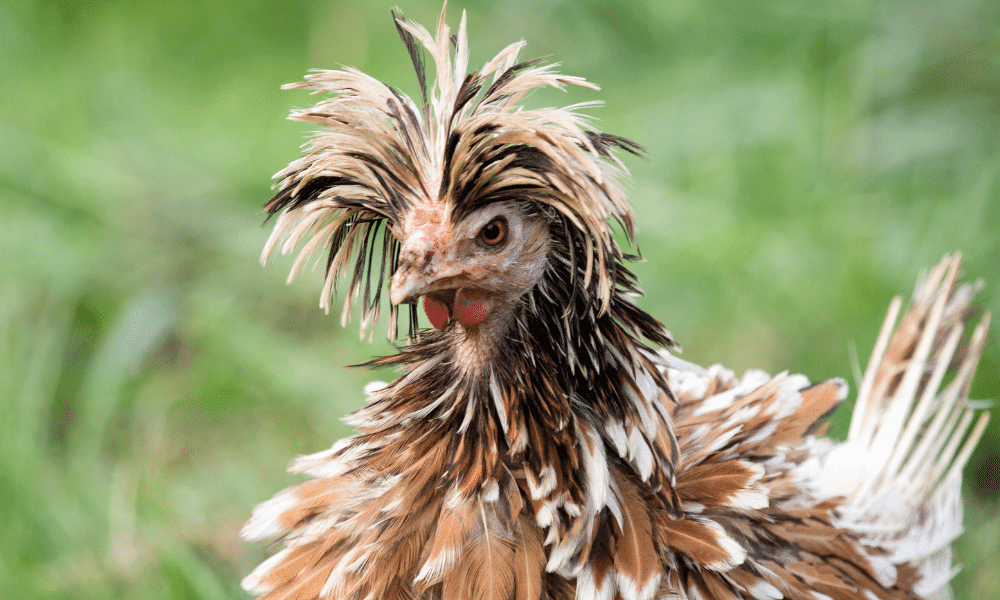 Both Polish roosters and hens can carry what’s known as the “frizzle gene”. This causes the chicken’s feathers to twist as they grow, kind of “frizzing up”, making for some truly amazing feathers. 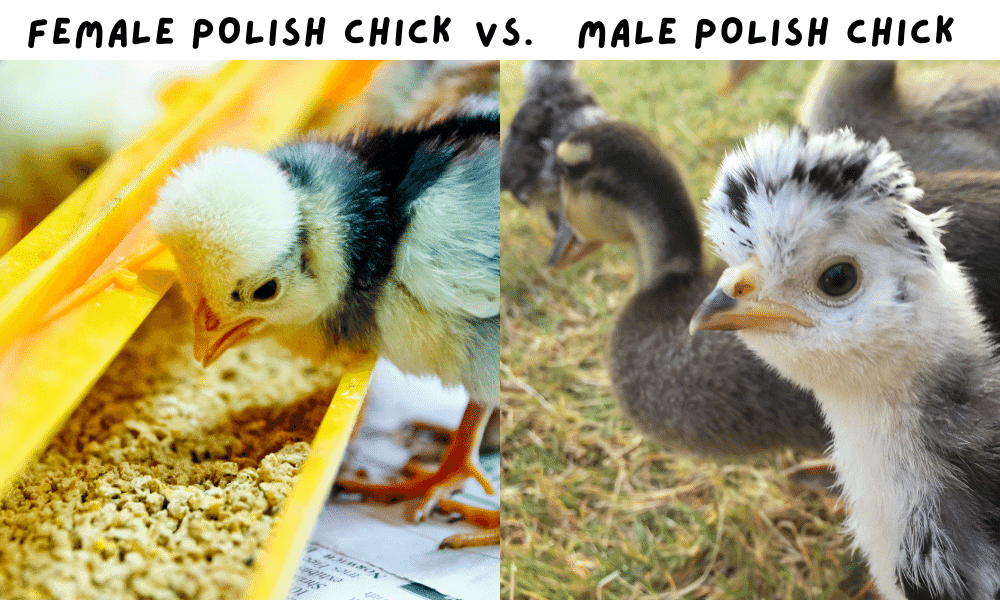 Usually determining whether baby chicks are male or female has to wait until at least 6 weeks of age when the chicks start developing their crest, wattle, or tail feathers.

But, baby Polish chicks are quite unique, as they actually show differentiating characteristics between 1-and 2 weeks old. That is, you can tell if your baby Polish chick is a male or female by observing its crest, the feathers on the top of its head.

Polish female chicks will have a distinct circular puff on the top of the head, whereas Polish male chicks will show a more rectangular shape, and are much more uneven. Normally, if your baby polish chick has a clear spherical crest then you can safely presume it’s a female!

Soon after about 2 weeks old, your baby chicks shed their baby fluff and it can again be hard to determine the sex of your baby Polish chicks.

If you do miss this 1-2 week sweet-spot opportunity, then your plan B is waiting until they are about 8 weeks old.

So, telling the difference between Polish hens and roosters isn’t that complex. Their key differences as adults are in size, crest and tail feather plumage, and the prominence of their wattles.

Interestingly though, as newborn babies, Polish chicks are unique in that you can actually tell the difference between the males and females just by observing their little afro.