Rhode Island Red Vs. Golden Comet (Differences & Which Is Best)

Whether you’re raising chickens as a lifestyle choice or whether you’re running your own backyard operation – or both – you can’t go wrong with the wonders of the Rhode Island Red and Golden Comet chickens.

Of course, it’s no secret these are some of the best egg layers out there!

But, if you’re looking to become a new chicken keeper or looking for new additions to your flock, it can sometimes be hard to choose the best chook for your needs.

That’s where we come in.

Here at BackyardFarmLife, we love ALL chickens. We know our Rhode Island Reds and we know our Golden Comets.

But, to the naked eye, these two beauties can often be mistaken for one another as they look so similar!

Don’t let their appearances fool you. These two types of chickens are very different.

Time to get up close and personal.

Rhode Island Reds (RIRs) were developed in the early 1900s as a dual-purpose breed. Their popularity is peaking, given their reliable egg-laying and beautiful red plumage.

On the other hand, Golden Comet chickens are actually a hybrid breed and are not a truly recognized breed of chicken by the American Poultry Associations standards

That’s because Golden Comets (GCs) are a mix of a Rhode Island Red and White Leghorn chicken, hence the “Golden”, light red plumage.

Still, since Golden Comets are also 50% Rhode Island Red, it’s no surprise that these two types of chooks look so much alike!

In the world of chickens, size matters.

That’s because a larger chicken usually means better production, both in meat farming and in egg production due to larger eggs!

Rhode Island Reds tend to develop a little slower, but the hens will end up between 8-10 pounds at maturity.

At a glance the size differences are minimal, but generally speaking, RIRs grow larger than Golden Comets!

Ahh, egg production. One of the best parts about raising chickens – collecting these delicious, fresh eggs.

We all know that Rhode Island Reds are one of the best heritage breed layers around, laying between 200-260 large-sized brown eggs per year. Pretty impressive, really!

Not many true chicken breeds are able to match this stunning egg production. But, Golden Comets are hybrid breeds – specifically bred to maximize their egg production!

Golden Comets will more reliably lay between 250-300 eggs per year, all year round.

Rhode Island Reds are friendly and laid-back. They’re also curious, which makes them seem busy and active all of the time. It’s never a dull moment in the backyard raising RIRs!

Although I wouldn’t call Rhode Island Reds aggressive, they are more confident and tend to rank higher in the pecking order than some other more docile breeds.

Golden Comets are known as the ‘peacemakers’. They tend to rank lower on pecking orders and actively avoid conflict. They’re also an active breed that likes to explore just as much as the next chicken.

Both these types of chickens, the RIRs and GCs fit perfectly into any suitable space, in any backyard that’s willing to have them.

Rhode Island Reds are good at handling almost all weather conditions. Although, they tend to prefer colder climates.

They are incredibly self-sufficient and love to forage.

RIRs tend to live long and prosperous lives, laying for 5+ years and living up to 10!

As a hybrid, Golden Comets tend to have a shorter lifespan than heritage breeds of about 4–5 years. Because of their constant laying, they’ll also require extra calcium supplements in their diet.

Other than that, they’re quite hardy and can tolerate a wide range of climates. 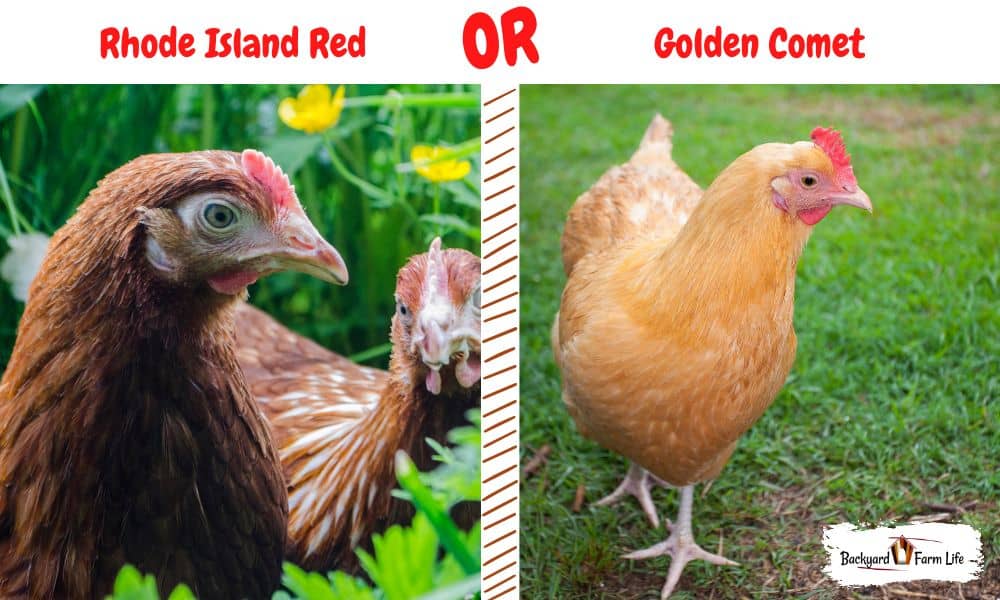 Although these stunning creatures do look similar, they do have some visible differences that can help you tell them apart.

The most obvious difference is in the plumage color.

Rhode Island Reds are a deep reddish brown, almost like a mahogany color.

Golden Comets share some of this “Red”, but because they are bred with white Leghorn chickens they appear much lighter.

Because of this mix, Golden Comets appear orangish-gold to light-red.

It’s important to note, however, that both Rhode Island Reds and Golden Comets can come in a variety of shades. But, generally speaking, RIRs are much darker than Golden Comets.

Rhode Island Red Vs. Golden Comet: Which Is Best?

So after all that, which is the superior chicken?

Although I hate answering questions with “it depends”, it really does depend on what qualities you’re looking for.

If you’re aiming for maximum egg production then Golden Comets would be considered the best. They produce more eggs and develop to point of lay quicker.

If you’re looking for a long-term backyard companion that still pays their rent in eggs, the Rhode Island Red is best. They lay amazingly well and are incredibly curious which leads to bold personalities and hilarious antics!

I’ll leave the final decision up to you!