Silkie Hen Vs. Rooster: How To Tell The Difference (With Pictures!)

The Silkie is a chicken breed known for its smooth and fluffy feathers. To name a few characteristics, they have black skin, feathers that feel like silk, and are friendly and docile.

But, Silkies mature slower than other breeds, which can make it difficult to determine the gender of your Silkie chicks at an early age. Although it’s much easier to tell whether your Silkie chicken is a hen or rooster from 5-6 months old, often you’ll want to know at a much younger age to understand how your flock is going to work.

Here we go through the distinct differences between Silkie hens and roosters, from an adult age all the way down to baby chicks, so you can prepare accordingly! 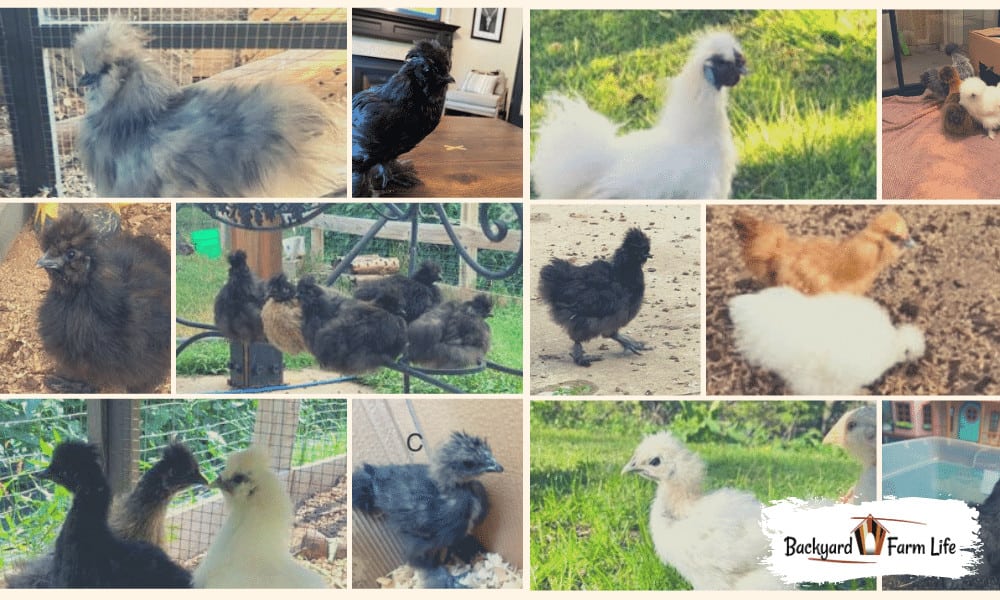 Silkie Hen Vs. Rooster: How To Tell The Difference 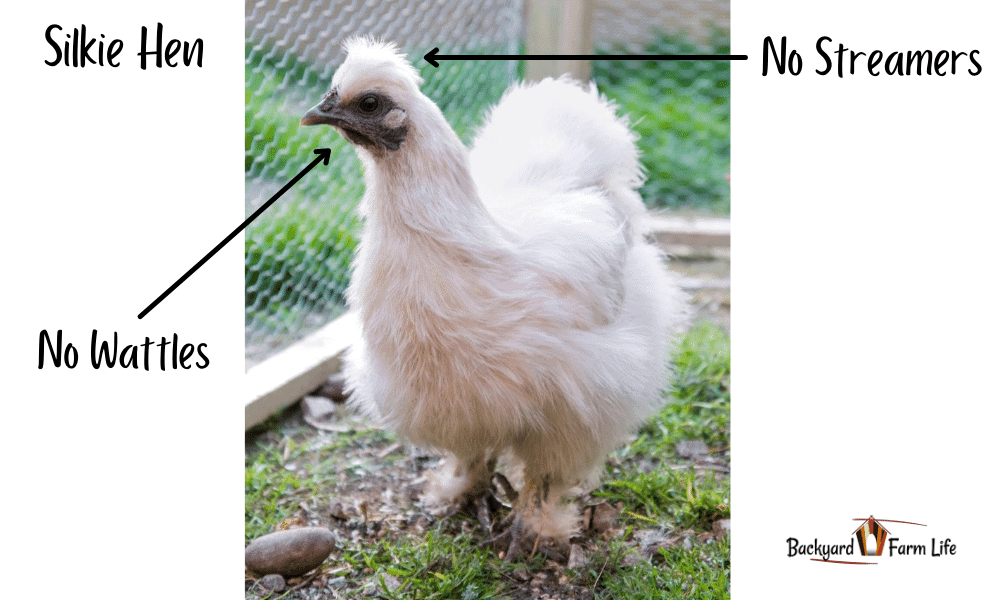 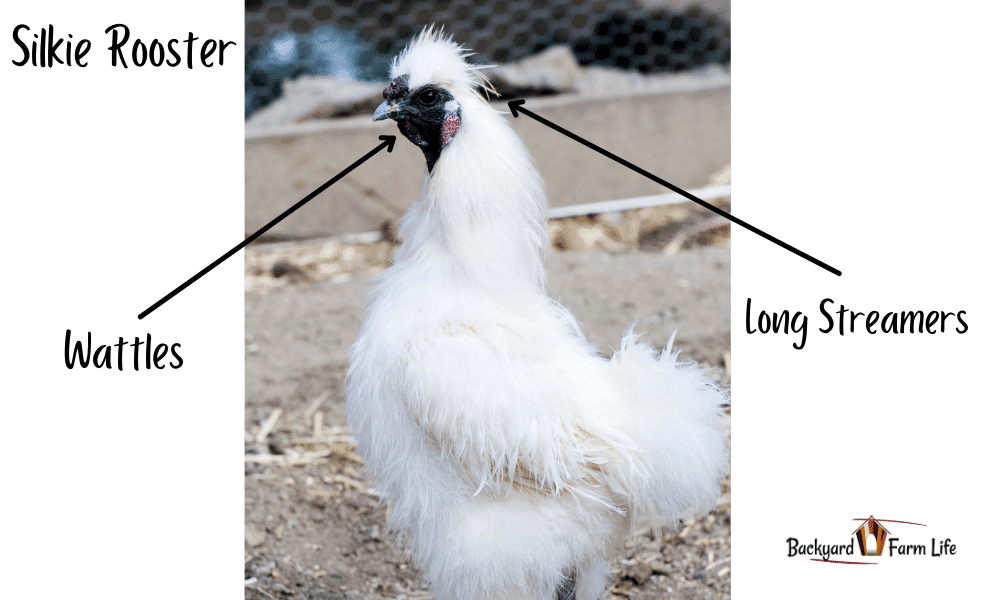 When Silkies are fully grown, it’s quite easy to tell which is a rooster and which is a hen.

When comparing a Silkie rooster to a Silkie hen, you can see Silkie roosters appear visually larger and have much larger wattles under their necks and combs on their heads than Silkie hens.

Not to mention Silkie roosters will crow and are naturally more aggressive and protective of their flocks than Silkie hens!

However, these differences aren’t always clear at younger ages. This is a major pain point for many new Silkie owners as it’s often at these younger ages of 1-8 weeks old that you would like to know if you’ve got yourself a Silkie hen or rooster!

Luckily there are a few noticeable differences that pop up at various ages that will indicate whether you’ve got a male or female Silkie chick.

Here are the main physical and behavioral differences between a Silkie hen vs. a Silkie rooster.

At adult age, there is a clear size difference between the Silkie hens and Silkie roosters. Roosters are usually a little heavier and larger. A male Silkie’s legs are thicker and have more feathers. They develop spurs around 6 months of age. Females don’t grow spurs at all.

Male Silkies will stand far more upright than female Silkies. In addition, they appear to be taller than their hen counterparts. However, these distinctions aren’t usually too noticeable until at least 12 weeks of age or more.

Both roosters and hens eventually grow amazing-looking crests, which is why they are referred to as “Afro Chickens”!

The appearance of the wattle is one of the easiest giveaways that your Silkie is a rooster. Even from as young age as 6 weeks old! You see,  normally a Silkie hen won’t start growing their wattles until at least 6-9 months, and even then they will be much much smaller.

A Silkie rooster will show a clear wattle growing from its cheeks to under its beak from as young as 6 to 8 weeks old!

This is the easiest tell-tale sign you’ve got yourself a Silkie rooster. If your Silkie is over 12-14 weeks old and still shows no sign of wattle at all then you know she’s a hen!

Female Silkies have more distinctive primary wing feathers than male Silkies do. The fluff in the male bird’s wing is more defined when they’re older. Also, the wings of some roosters will be shorter. After hatching, these differences are usually noticeable.

Feathers grow on the neck and in front of the tail of the rooster. Silkie hens don’t grow any long tail feathers at all, whereas a rooster will have definitive tail feathers from about 10-12 weeks old, and will stand out significantly more than a hen.

Silkies are also capable of inheriting the Frizzle gene making Sizzle chickens, which have curly feathers all over their body!

There are slight behavioral differences between the sexes, even from a young age. Male Silkies, for example, crow loudly – like you expect any rooster to! Around the age of 4 months, they start to crow, while the females don’t.

Roosters usually have a bossy attitude and appear to be more confident. They’re more territorial, watchful, and physical with each other. The females are more timid and calm, which makes for perfect backyard companions for young families!

With some other fluffy chicken breeds, you’re able to determine a chick’s gender by its crown plumage, like with Polish chicks,

However, Silkies don’t have many distinctive signs of gender at birth, unless their vents have been professionally examined.

So, if you’re needing to know if your baby Silkie chick is a hen or a rooster, there are two main physical characteristics that start presenting from about 6-8 weeks old. You can look for:

With Silkies, it’s notoriously hard to tell between the sexes at a young age, particularly when compared with Isa Brown, Golden Comets, or other hybrid chicken breeds.

But, between the ages of 8-12 weeks old, you can normally start to identify which Silkie chicks are males and females.

This is by the appearance of their wattles and streamers. This is because Silkie hens won’t start growing wattles until much later in their development, but many Silkie roosters will show theirs from as young as 6-8 weeks!

If you are having trouble identifying the gender of your new Silkie chicks, please feel free to comment, post on our Facebook page, or send pictures — I would love to see them!

For more about our beloved Silkies, check out:

35 thoughts on “Silkie Hen Vs. Rooster: How To Tell The Difference (With Pictures!)”