Why Do Chickens Puff Up Their Feathers?

I feel like you could study the habits of a chicken for decades and still learn something new just by watching their behaviors. I love it.

Have you ever wondered why your chicken puffs up its feathers? Sometimes it’s in response to being picked up and put down, and sometimes it comes seemingly out of nowhere.

Here we go through what it means when your chickens puff up their feathers, why they do it, and whether you need to be concerned at all.

Why Do Chickens Puff Up Their Feathers?

A chicken’s feathers serve many purposes, more than just for heat insulation and temperature regulation. I mean, they were even supposedly used to help a chicken fly before they became domesticated farm birds.

But, when you see your chickens are all puffed up you can’t help but be curious. Sometimes it’s more obvious than at other times, as it can be as a reaction to something. But, sometimes they puff up their feathers out of nowhere.

Of all the reasons your chicken will puff up their feathers, the most common reasons are that your chickens are cold, they are “rejecting” a rooster, or it’s being used as a sign of aggression, or if. In rare cases, it can also be a sign that your chicken is sick.

You can usually tell why your chicken has shaken up its feathers by watching what happened first, what comes after, or what else they are doing at the same time. Let’s take a closer look.

One of the primary purposes of a chicken’s feathers is to act as an insulation layer between the chicken’s body and the outside environment. This gives chickens much more control over their internal temperature.

If you notice your chicken has its feathers puffed up and they are standing on one leg then this is a clear sign that your chicken is too cold. Bulging up their feathers can trap some air in, creating an extra insulation layer. Tucking one leg up is another way to preserve more heat, as most of a chicken’s temperature is lost or gained through their feet.

Another sign your chicken is too cold is when they dig holes and sit in them, trying to absorb heat from the earth. 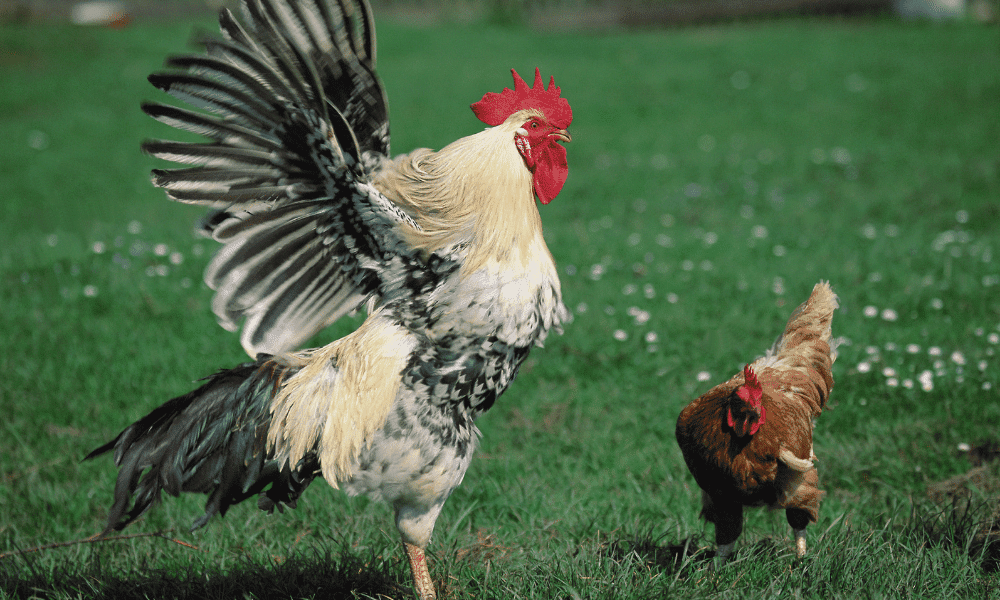 Roosters can be quite busy with their hens, if you know what I mean. But, luckily a hen doesn’t accept mating all the time. So, if you see your hen and rooster mating, but your chicken puffs up their feathers and shakes afterward, then they have just rejected and expelled the rooster’s seed.

This is a controllable behavior your hens possess, and they use it when they don’t desire the rooster. Sometimes, unknowingly, you can trigger this in your chickens.

You may have noticed chickens will do a little squat next to you sometimes, maybe when you’re just walking past, going to feed them, or needing to move them.

This is known as the submissive squat, and it’s where your hen is getting ready to be mounted by a rooster for the purposes of reproduction.

My hens will sometimes do this around me, and if you give them a little pat or stroke, or pick them up to move them, they will often shake and puff their feathers up afterward.

There are many reasons your chickens may be showing aggression or stress, causing them to react and puff up their feathers.

Chickens will show aggression if their coop is too small, or when dealing with others from the opposite end of the pecking order, or for first rights to the top roost. They will even do it in response to a potential threat or predator. I’ve seen one of my silkies puff up in a stand-off against my dog (who was just curious!).

This puffing up of feathers is usually very temporary, almost as a warning sign, or just at the moment, and your chickens will return their plumage to a controlled state once the conditions have changed.

Most of the time, except in extreme cases, it can be very hard to tell if your chickens are actually sick. Unfortunately, if they do show signs of illness it can often be too late, making things even more difficult and hard to cope with.

If you’ve observed chickens long enough to see loss, you’ll know some things off when you see one of your chickens seeming “down”. As a part of this, your chicken may puff its feathers up and stay in one place in the coop or run for lengthy periods of time.

If you have noticed some things a little strange you can check for further symptoms and causes:

Is It Normal for Chickens to Puff Up Their Feathers?

The short answer is yes. It’s a natural part of their behavior and is usually a response to cold temperatures, rejecting a rooster’s seed, or as a sign of aggression.

It’s completely normal, but in most instances, it’s still worth checking out. This is because it can, on occasion, be a sign of illness in your chickens.

Diagnosing chickens is complex, and their immunity is fragile. So, it’s essential to keep every aspect of their health in mind when observing them, and feeding them too!

We can safely say that there are many reasons chickens puff up their feathers. This can be a cry for help, a warning sign of aggression, or an indication of a bun in the oven. It can also be a temperature regulating mechanism to protect them against the cold.

Learning to read your chicken’s behavior is a great asset to have in order to understand these hilarious creatures. Plus, the more you understand your flock the better you can tend to their needs, and keep them safe from harm and illness.