Why Is My Chicken Eating Dirt?

You may think that it’s gotten to the point in your backyard farming life where you think you’ve seen it all when it comes to your chickens. I’m sure you know by now that your chickens will try to eat anything they can get a hold of. But, you may have seen them trying to eat dirt, which begs the question — is it bad for chickens to eat dirt?

Here we go through why chickens eat dirt, what dirt actually does for chickens, and what it all means.

When you’re watching your chickens eat dirt you may be sitting there asking yourself “really, girls?”.

Yes, chickens do eat dirt, and it’s actually more common than you might think. It’s not only chickens too, most other birds do it too — so what gives?

Well, eating dirt includes eating sand, grit, small stones, insects, seeds, worms, and other organic matter that can be found in soil or dirt. Each of these compounds within the dirt help with various processes inside your chicken, with the main purpose being to help with digestion. It’s like a natural form of grit for free-range chickens!

It also may simply look like your chicken is eating dirt when in reality, they are actually digging with their feet to try to find small insects and other foods in the soil.

Why Is My Chicken Eating Dirt?

While foraging or feeding, chickens will eat seeds, grass, insects, fruits, vegetables, and pretty much anything else they come across. But, since chickens don’t have teeth they rely highly on their digestive system to break down these foods in order to absorb the nutrients.

So, the primary reason you’ll catch your chickens eating dirt, sand, or soil is to help their bodies with digestion. They are able to use the coarseness of the dirt’s components to help crush and grind up their food.

The consumed dirt remains in the chickens’ crop and eventually ends up in the gizzards where it continues to grind food. The digestive tract of the chicken is built to digest anything that’s found in dirt, from worms, insects, germs, and organic matter leftover in the dirt.

As such, eating dirt isn’t harmful to chickens, so long as it’s in normal, low quantities — as it simply improves their digestive process. If your chicken feels like it’s eaten too much tough matter, or its stomach feels a bit upset, you may see it pecking at some dirt. It’s completely normal.

How Does Dirt Support Digestion in Chickens?

So how exactly does dirt support the digestion of food in chickens? To put it simply, chickens swallow food as is and eat dirt to aid in grinding it up, similar to other animals that feed on a lot of vegetation.

For humans and other animals that have teeth, they don’t need a gizzard because they can grind up food using their teeth.

However, for chickens or other poultry, things are a bit different. They store food without chewing it in the crop, which then trickles out slowly into the gizzard. If it’s especially tough, or a lot of food for them, they may eat a bit of dirt which helps the food break down in the gizzard.

To sum up, humans and other animals with simple stomachs chew/grind first then swallow. Chickens, on the other hand, swallow first and chew/grind later.

Is It Bad For My Chicken To Eat Dirt? 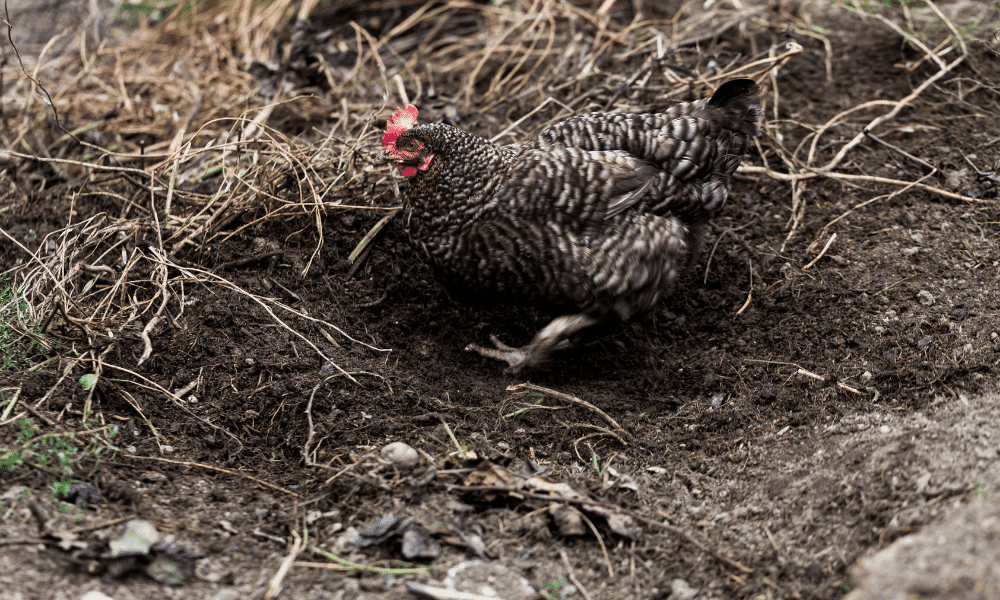 So, really not a bad thing for your chicken to eat dirt. In fact, it’s completely normal. However, it is worth watching which chickens are eating the dirt, how much, and also how often.

Depending on your location, the soil in your area may feature high concentrations of certain minerals that actually benefit your chickens’ health, which is why they will make it a routine to have a bite on their daily foraging runs.

If you find a few members of your flock are consistently eating dirt, like every day for example, then it could be a sign of a mineral deficiency or in worst cases, a digestive problem. However, more often than not it’s not bad for your chickens to eat dirt — but it is worth looking out for.

Note: It’s also important to keep your chickens away from fertilizer, as this often has some ingredients that are considered toxic to chickens in high doses.

Chickens have a keen eye (and stomach!) for eating only things which are beneficial to their health or serve a purpose in their digestive tract. Chickens will eat dirt, as well as other common minerals like small rocks or gravel or grass, all to aid in the digestion of their food.

It’s completely normal for chickens to eat dirt in small, sporadic amounts. If your chicken is eating it regularly or in large amounts then it could be a sign of mineral deficiency or digestive issues. It’s also important not to confuse eating dirt with foraging in the soil to find insects, seeds, and other organic matter for normal consumption!