Why Is My Chicken Squawking?

Chicken chat is a whole other language, really. What I find fascinating is that two different chickens from the same breed sound very very different. Some tend to “buck” and some tend to “chirp”.

You may have even noticed one or some of your chickens squawking rather loudly. Mind you, it’s normal for a rooster to be rather loud, but when your hen is sitting there squawking loudly for no apparent reason it certainly raises some eyebrows.

So why is your chicken squawking? What are they trying to communicate exactly?

Here are the possible reasons your chickens are squawking, what it means, and how you can calm them down!

Why Is My Chicken Squawking

Chickens use their body language and a few distinct calls to communicate with one another or with you as their caretaker. You can sometimes tell what a chicken is trying to communicate by the pitch, voracity, and whether it’s clucks, chirps, or bucks.

But, consistent or sudden squawks can be a little harder to translate. They can mean various things, from alerting the flock to food or predators, to the infamous “egg chorus”, to wanting to be let out of the coop!

One of my chickens, Nugget, will always let out a quiet squawk whenever I touch her. It’s funny though, it’s obvious she’s not scared – it’s almost as if she likes it as she always comes for more!

Here’s what your chickens are trying to tell you when they squawk loudly.

Your Chickens Are Alerting Their Flock

Chickens talk to one another all the time, sometimes referred to as chicken chatter. You might even find some of your chickens talk to specific chickens more often, as they have friends in the flock.

One main benefit of chickens flocking together is that they can communicate important alerts to the rest of their flock.

The main example of this is in response to a predator, or a perceived danger. You might have heard this if one of your chickens sees a hawk or other large bird fly by, or if a fox gets close. You may even hear your chickens do a distinct “trilling” sound too!

However, chickens might also let out a loud squawk to alert their flock to other things too, such as when they see you coming with food or treats!

Your Chickens Are Performing The Egg Chorus

Chickens actually squawk rather loudly and almost in a certain rhythm shortly before they lay an egg or shortly after they lay an egg, about an hour or so on each side.

Some theorize this is because your hen is happy it’s laid an egg, others say it’s simply to alert their flock and/or rooster that it’s laid.

Whatever the reason, it’s referred to as the “egg chorus” or “egg song” and is a phenomenon witnessed from all types of chickens, from bantams like silkies to egg-layers like ISA Brown, Cinnamon Queens, or Golden Comets. Even ducks will often quack when laying their eggs!

As backyard chickens owners I’m sure we’ve all had a time where we’ve slept in a little later only to be woken up by some unusually loud clucks and squawks coming from the coop.

This is because chickens can actually get a bit impatient, especially when they have their foraging and dust bathing routine to stick to.

So, chickens will often squawk loudly as they want to be let out of the coop or run, particularly if they’ve been locked in the coop all night.

Some chickens will also squawk and get aggressive if the coop size is too small for your flock, or if you don’t have enough nesting boxes for your flock.

How Can I Calm My Chicken Down? 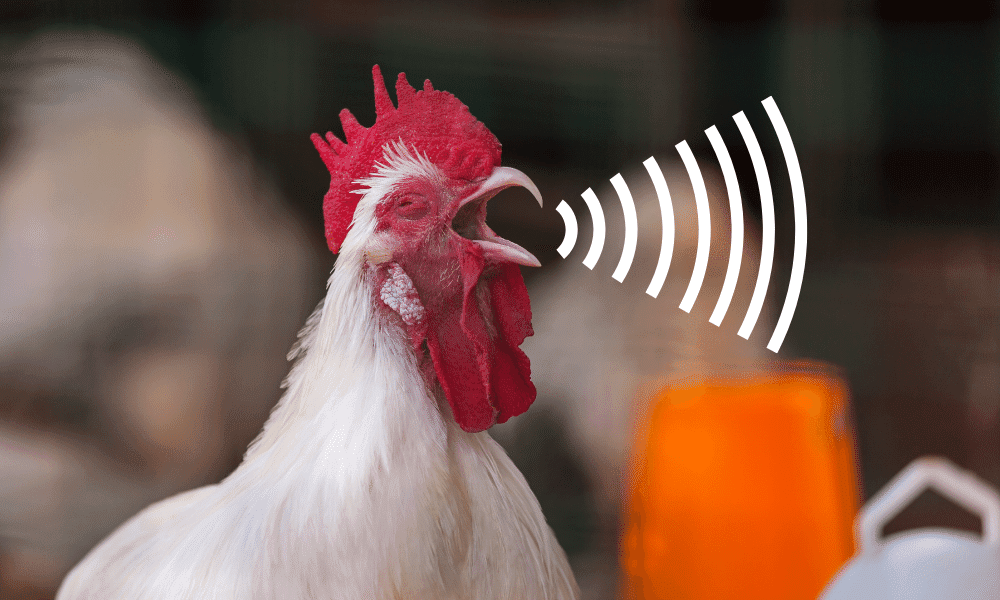 As much as you love your chickens, a squawking chicken can be rather annoying, and might even bother your neighbors if you live in a suburban area.

If you want to calm your chicken down and encourage them to be quiet, there are a few simple things you can do to:

So, although we have come a long way at understanding a chicken’s language, a squawking chicken can mean many different things. From alerting their flock to predators or food to performing the famous egg chorus – a loud chicken can be difficult to deal with.

The best way to calm them down is to let them out to free-range in the morning and make sure they have access to food and water. If you hear them squawking throughout the day, go distract them — it may shake whatever it was they were feeling!