It’s not often you get stuck with too many cinnamon rolls. But, if you’re a chicken owner and you can’t manage to finish all of them you may be thinking, can my chickens eat cinnamon rolls?

Although chickens can have bread and can have cinnamon, it’s not recommended to feed your chickens cinnamon rolls as it’s simply not healthy for them.

Although it’s not strictly dangerous to feed it to them, it just doesn’t offer anything from a nutritional point of view. Here’s everything you need to consider for the sake of your chickens! 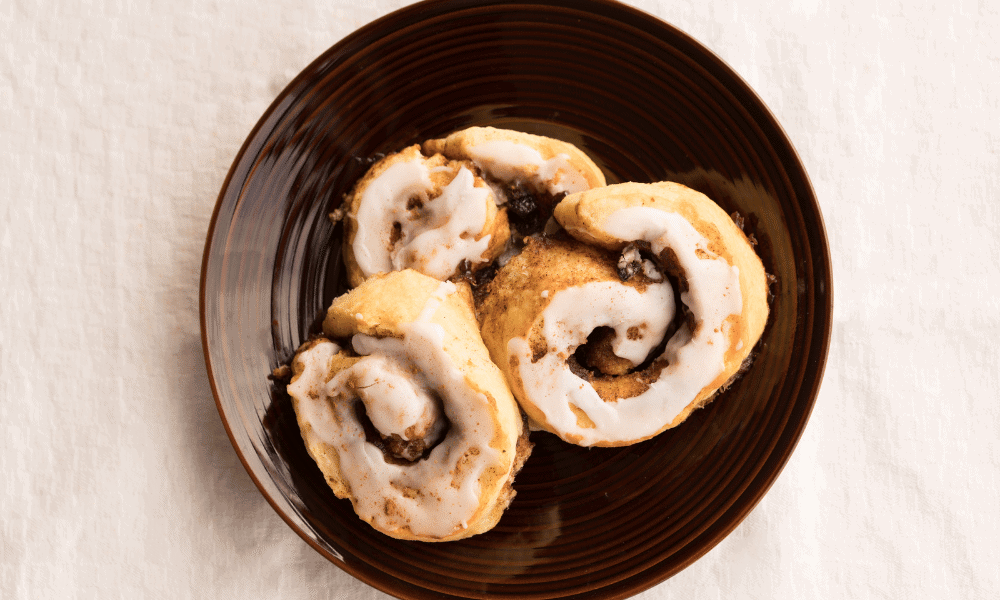 The truth of it is, cinnamon rolls contain far too much sugar to be reasonable to feed your chickens. On top of that, the thick doughy bread may cause indigestion for your chickens, particularly if they have a fair amount of it!

Aside from that, cinnamon is actually considered healthy for chickens, and in normal amounts, chickens can eat a bit of bread. But, in the form of a sweet cinnamon roll, with or without glazing, it’s just not suitable.

So, although it won’t necessarily cause harm to your chickens if they’ve only had small amounts, it is considered unhealthy for your chickens to eat. For this reason, it’s not recommended to feed it to your flock at all.

So, if you’re having a cinnamon roll to yourself and feel the urge to feed a bite to your chickens, you can — but it is considered unhealthy for your chickens to eat.

Interestingly, the cinnamon powder used in cinnamon rolls is probably the healthiest part for your chickens to consume, and it’s said to be one of the most beneficial spices you can feed your chickens.

For one, it contains a lot of antioxidants, making it a good booster for the immune system. On top of that, cinnamon is best known for fighting off respiratory infections. It’s also known to contain blood-thinning effects, which have a host of benefits, including being able to keep your chickens warm in extreme cold.

Nutmeg is also great for a chicken’s diet, and chickens also eat clove. Any baking spice is absolutely safe to feed your chickens in normal amounts.

Cinnamon Rolls: Too Much Sugar For Chickens

So, if cinnamon is so healthy for chickens, then why are cinnamon rolls considered unhealthy?

Well, it comes down to the sugar content. Just like too much sugar is bad for humans, causing various minor to major consequences, it’s just as bad for your flock – even if they are homemade cinnamon rolls and it’s just brown sugar.

Too much sugar will cause issues with your chicken’s digestive system, causing discomfort and diarrhea, and can lead to overweight chickens.

What About Just As A Treat?

If you really want to give your chickens a bit of a cinnamon roll, then you should make your absolute best effort to reduce the sugar they are consuming.

The easiest way to do this is to cut off ALL the glaze and frosting. The dough itself usually contains enough sugar as it is, but it’s much more manageable for chickens to consume compared to the frosting or glaze.

However, there are so many better healthy treat options for your chickens, including fruits, vegetables, grains, seeds, or insects.

For a full guide check out the full guide to feeding table scraps to chickens.

As a chicken owner, it’s your responsibility to manage the wellbeing of every member of your flock – from the older free-loading hens to the younger more erratic fluffy-butted friends.

If you want your chickens to be at their happiest and healthiest, it’s recommended to avoid feeding your chickens any type of cinnamon scroll, cinnamon bun, or cinnamon roll, as although the cinnamon is healthy, the rest of the ingredients simply aren’t.