Can Chickens Eat Loquats? Is It Safe?

Loquats get a bad reputation for being too acidic and sour, especially when they’re immature. But, if you have a loquat tree in your backyard and you want to put it to good use, you may be thinking of feeding loquats to your chickens.

Chickens actually don’t mind the sour, so won’t mind how ripe the fruit is. In fact, unsurprisingly some chickens actually love the taste, well about half of my chooks do anyway. But can chickens really eat loquats? Are loquats really healthy for them? Here’s everything you need to know.

If you have a loquat tree in the backyard that’s beginning to grow its fruits, you may be wondering if your chickens are able to eat the fruit that drops from it safely. The good news is loquats don’t contain any substances that will be toxic for your chickens and will be completely safe if eaten in moderation.

So, chickens can in fact eat loquats. However, not all of your chickens will actually eat loquats, as they can be a bit sour for some — but it won’t stop them from having a try!

That said, bear in mind that loquats have a high content of sugar, so you shouldn’t let your chicken overindulge in them, just like other sugary fruits like mango, oranges, and persimmons.

Chickens do a good job of eating a balanced diet when it’s available to them. So, even if you have a loquat tree that constantly drops fruit, or another fruit tree for that matter, it’s likely your chickens will only have a small amount while they’re doing their daily foraging.

If you want to actually serve it to your chickens, that’s absolutely fine too — as long as you limit how much you’re feeding them. Simply cut a few loquats in half of the quarters to expose the flesh, and add it into a fruit and vegetable mix and feed it to your chickens once or twice a week.

Chicks and pullets shouldn’t eat loquats. During the growth phases of a chicken it’s vital they have a well-balanced, protein-heavy diet. Loquats, although they do contain many nutritious benefits for chickens, simply don’t offer chicks or pullets enough protein and fiber and are a bit sugary for them.

If you’re tempted, it’s absolutely fine to give them a small sample to try, but it shouldn’t be used as any kind of substitute for chick starter or grower pellets.

The Nutritional Benefits Of Loquats for Chickens 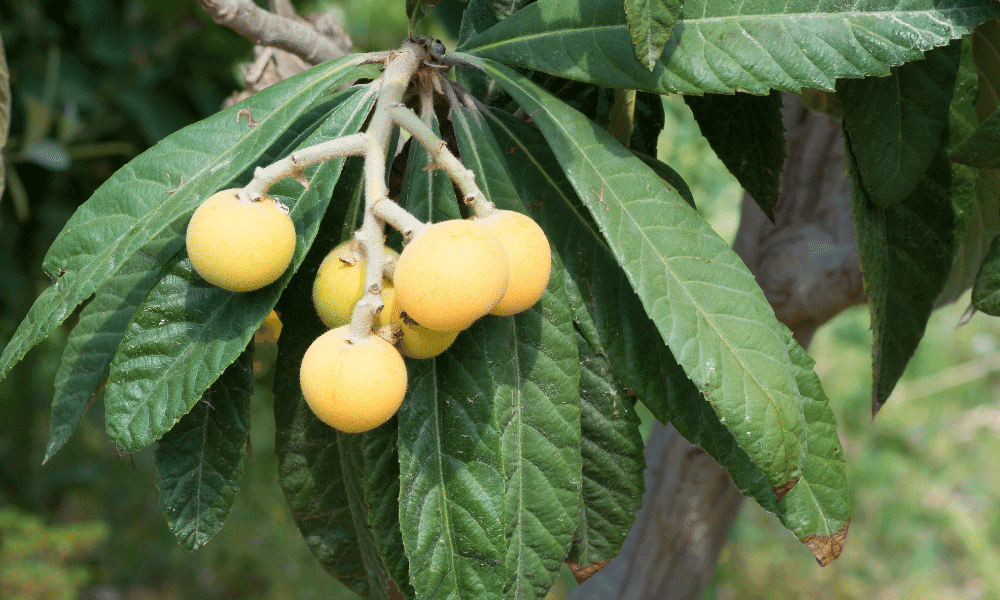 Loquats are full of nutritional value for your chickens.

Loquats are best known for their high content of carotenoid antioxidants. They contain beta carotene, which is known for fighting degenerative diseases and boosting cell function. Carotenoids don’t only improve immunity, but also reduce inflammation.

Darker loquats will have more carotenoids than the pale ones, so you may want to choose those out of the bunch for your chickens if you’re only giving them a few.

Moreover, loquats are low-calorie snacks, making them suitable if you’re afraid your chickens are becoming overweight from their treats.

It’s worth noting, though, that loquats don’t contain a lot of protein or fiber, contrary to other fruits you may use as treats. A cup will have around a gram of protein and three grams of fiber, which is insignificant.

Your chickens can eat loquats, but they shouldn’t be your first option when looking for treats. They’re high on carbs and sugar, and they’re low on protein and fiber. So, they don’t present a high nutritional value, and the sugar may be harmful to the chickens in the long run if consumed regularly.

But, if you have a loquat tree and you’ve noticed your chickens pecking at some of the fallen fruit, then you don’t need to worry about your chickens having a go at them. Loquats aren’t toxic to chickens in normal amounts, and moderate amounts of them will be a good boost of antioxidants and nutrients for your chickens too!