Can Chickens Eat Parsnips (& What To Avoid)

Belonging to the same family of root vegetables, parsnips are strikingly similar to carrots except being white instead of orange.

They’re not as sweet as carrots, but they are praised for their high nutritional value, thanks to their high content of vitamin K, vitamin C, and folate.

If you grow parsnips or you regularly have them stocked in your household you may be wondering if you can feed them to your chickens. So, here’s whether chickens can eat parsnips, what you need to watch out for, and what nutritional value they hold for your feathered friends.

So yes, chickens can eat parsnips and will make a great addition in your rotation of safe and healthy table snacks for your chooks. However, it’s important to remove any leaves and greens from the vegetable before giving it to your flock, as these parts could be toxic in high amounts.

Raw parsnips tend to have more nutritional value than cooked parsnips, as some of the nutrients are lost while it cooks, varying depending on its preparation method. But, if you’re feeding your chickens raw parsnip it’s best to grate it up or chop it into small, fine cubes. This is because raw parsnip can be quite tough and your chickens won’t easily be able to eat it!

If you’re feeding your chicken’s cooked parsnips they will be much softer and your chickens won’t have any issues pecking at them! But, be sure to get rid of any additional seasonings, salt, or sauces before feeding them to your chickens.

Well, parsnips’ tops and greens are toxic to humans to some degree, causing skin irritation or blistering. But their effects on chickens are still not studied. The sap of parsnips is known to contain a phototoxic substance called furanocoumarin (yup, and I can’t even say it properly). When exposed to skin, it creates a reaction and irritation occurs.

While we haven’t tested whether parsnip greens or leaves are toxic to chickens, it’s best to avoid them completely where possible. If you do grow parsnips in the backyard and are worried about your chickens pecking at them, you can get some netting or a chicken fence to discourage any curious chooks.

But, chickens are normally pretty good at avoiding foods and vegetation that are bad for them, and in low amounts, parsnip greens or leaves could be entirely safe — so I wouldn’t worry too much!

The Nutritional Value Of Parsnips for Chicken 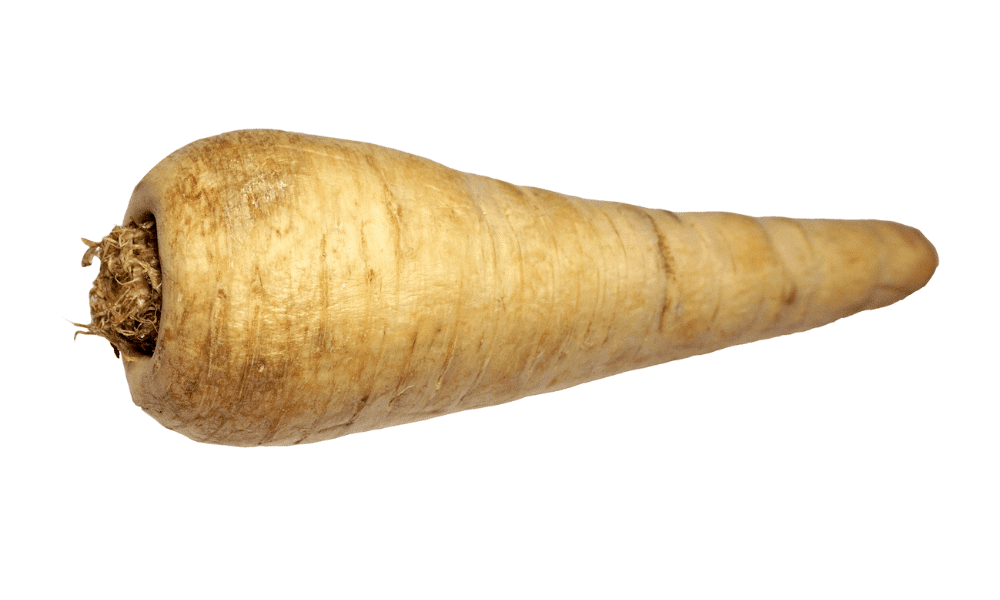 Root vegetables are at the peak of nutritional content when it comes to your chicken’s requirements. If you’re making a fruit and vegetable mix for your chickens I would always try to include at least one root vegetable, from beets, to carrots, to radishes.

Being a member of the root vegetable family, parsnips are highly nutritional for both chickens and humans. On average, a cup of parsnips contains 6.5 grams of fiber, 1.5 grams of protein, and only 0.5 grams of fat. Parsnips also provide a sufficient amount of minerals for your chickens.

Parsnips are also high in micronutrients, antioxidants, and vitamins. Antioxidants are known for fighting diseases and preventing cell damage. Meanwhile, fiber is known for its ability to optimize digestion and keep the chickens full for longer. The micronutrients are perfect to bolster your chicken’s general health too, helping chickens with regular egg production.

Moreover, the vitamin C in parsnips boosts immune function. So overall, parsnips are highly nutritional for your chicken. You can use them in small amounts as daily treats or a few full cut-up parsnips for an occasional healthy table scrap meal.

Chickens can eat both raw and cooked parsnips, but it’s better to leave them raw as they yield much higher nutritional content.

Let’s be honest, a chicken eating a parsnip won’t be the strangest thing you’ll see them eat, in fact, it’s far from it!

So, chickens can eat parsnips, and like most vegetables from the root vegetable family, they are exceptionally healthy and completely safe to eat, cooked or raw. Providing essential nutrients, protein, and fiber.

But, to be on the safe side, it’s best to avoid parsnip tops, stems, greens, and leaves, because they are widely accepted to be skin irritants and their effects on chickens have not been studied to any trustworthy degree.