Can Chickens Eat Goji Berries (Is It Safe?)

Those who own goji berry bushes and chickens will attest that every day some (or most) of the fruit goes missing.

That’s right, chickens will eat goji berries right off the bush, and even jump up if they have to.

But, are goji berries really OK for chickens to eat? And what about the dried variety too?

Look no further. Here’s whether it is safe for chickens to eat goji berries, either fresh or dried, and what nutritional benefits they actually have for chickens.

Is It Safe For Chickens To Eat Goji Berries?

The bright appearance of a goji berry really catches a chicken’s eye, as chickens are often attracted to red.

This can be great for chickens, but not so good if you are trying to grow the goji berries yourself!

But, if you’ve seen your chickens eating your goji berries, sometimes known as wolfberries, and were a bit concerned whether it was OK, we’ll put your mind at ease.

In fact, it’s not only OK for chickens to eat goji berries, but it’s actually considered healthy so long as it’s fed in moderation, similar to other fruits like loquats, persimmons, mango, etc. 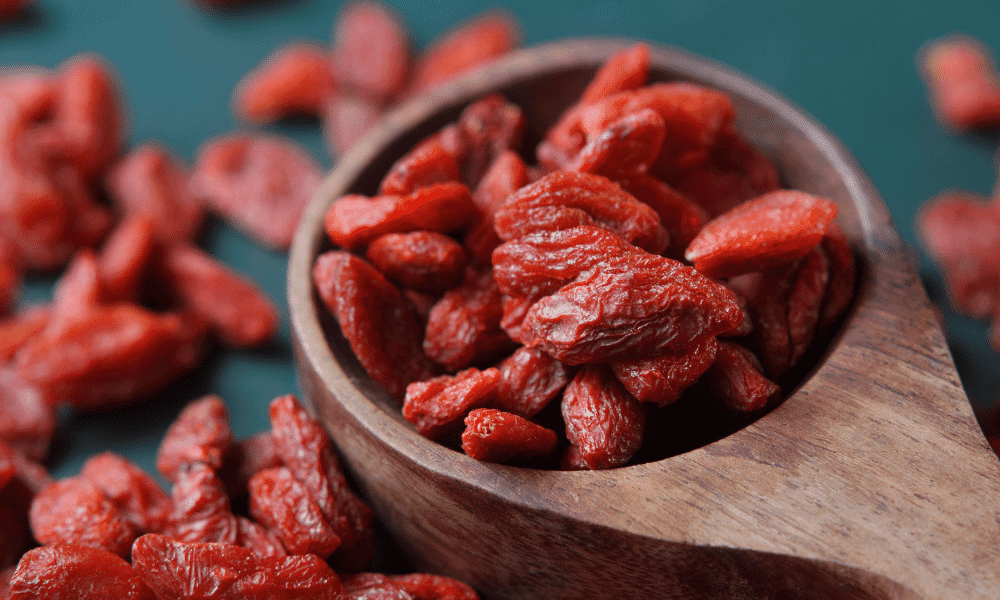 As we know, dried fruits are exactly like their fresh, ripe, counterparts. However, just because they’ve lost most of their moisture, doesn’t mean they lose much in the way of nutrition. Just like sultanas or raisins.

For this reason, it’s completely OK for chickens to eat dry goji berries, and they are considered to be just as healthy as when they are ripe.

Nonetheless, you should still only feed them to your chickens in moderation. This is so your chickens can absorb all the benefits, without overeating and missing out on their normal balanced chicken feed.

There are a number of plants where although the fruit or vegetable itself is safe to eat, the stems, leaves, and other plant matter are actually toxic.

For example, chickens can eat eggplant, and it’s plenty healthy for them! But, since it’s part of the Nightshade family then the stems and leaves actually are considered toxic.

It’s important to note that goji berries, being part of the Lycium Family, means that the leaves and stems are actually considered toxic too.

Although a few stems and leaves from the goji berry when consumed accidentally may be perfectly safe, it’s best to avoid them entirely just to be on the safe size. 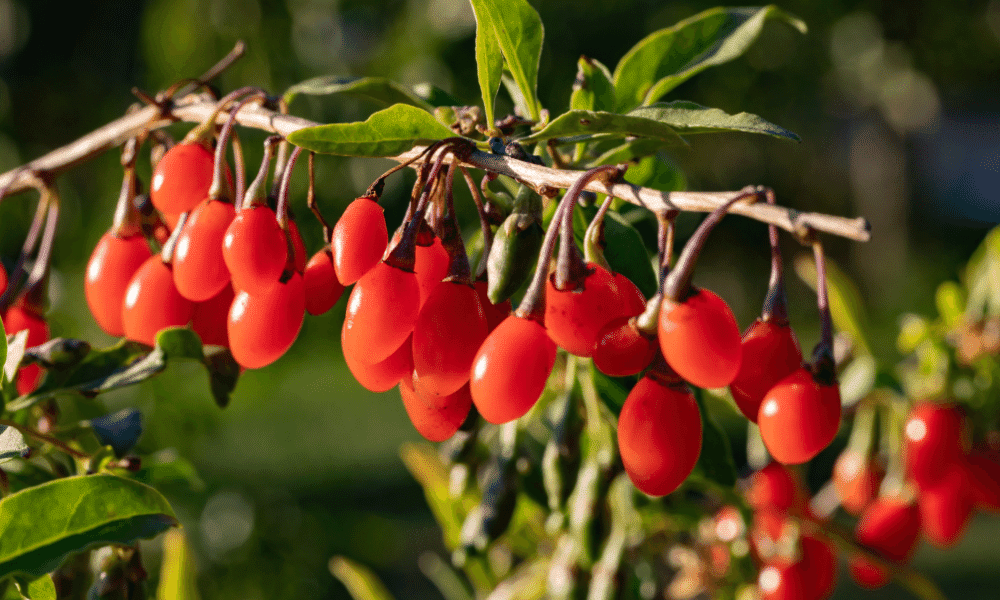 A lot of fruit and vegetables are actually safe and healthy for chickens to eat, but with many of them, your chickens simply seem disinterested.

When it comes to goji berries, chickens love them like a sweet delightful delicacy. This makes it super easy to feed your chickens goji berries as a treat, so they can enjoy the benefits and the taste!

Check out this video of chickens swarming to get a taste of the goji berries!

The dust settles. All of the goji berries are gone. All of your chickens are content.

Now, you may be wondering, after all that: what nutritional benefits do goji berries even have for chickens?

Well, in addition to being a lovely treat for your chickens, goji berries are also quite nutritious. According to the US Department of Agriculture, the berries contain a wide range of nutrients, such as:

Additionally, the berries are low in calories and sugars while containing a decent amount of antioxidants. This is perfect as too much sugar isn’t good for chickens.

Overall this fits quite nicely into a chicken’s diet as an odd treat or within a nice fruit and vegetable mix for your chickens.

How To Serve Goji Berries To Chickens?

Chickens can enjoy the goji berries in a wide variety of ways. You can feed it to them as fresh plump berries or as dried fruits like raisins. Dried goji berries can be stored for a very long time, which makes them ideal as a treat for your chickens.

The best part about these berries is that they can be eaten right away, whether they’re fresh or dried.

However, it’s important to know that goji berries can’t be used as a reliable source of primary nutrition, simply because they don’t contain enough protein, energy, or calcium to sustain a chicken.

Instead, you can only incorporate it into your chickens’ diet as a treat alongside a healthy balanced diet. Remember the 90:10 rule. 90% formulated feed or seed mix, and 10% foraging, treats, and other chicken-safe table scraps.

Your curiosity thirst has now been quenched. Chickens can eat goji berries, whether they are fresh or dried.

Just remember to avoid the leaves and stems, as they aren’t considered healthy or even safe for your chickens to eat.

Otherwise, we’ll call this one a win-win. You’re happy, and your chickens are happy.

2 thoughts on “Can Chickens Eat Goji Berries (Is It Safe?)”