Looking for a stunning new addition to your flock? Or perhaps you’re just curious about what chicken is the ultimate blue-egg layer.

That’s where we come in.

Sure, both Cream Legbar chickens AND Ameraucana’s are revered for their blue eggs and brilliant companionship. But, there are some subtle differences between the two that makes them each so unique.

Let’s compare the differences in their egg-laying and egg characteristics, temperament, and overall hardiness.

We’ll let you be the judge of which one’s best! 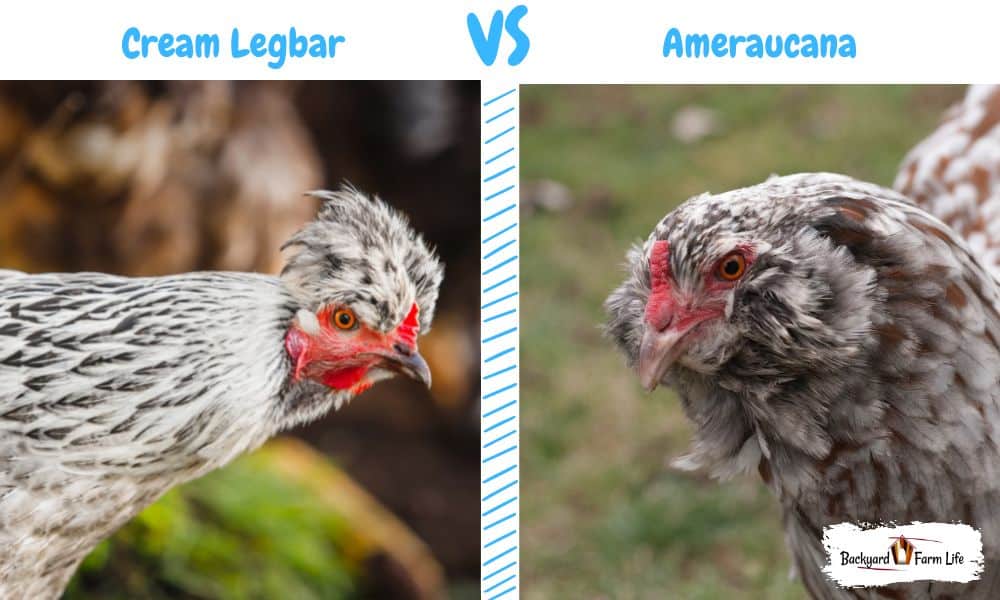 It’s the crest vs. the beard.

That’s because Cream Legbars and Ameraucana chickens are both derived from the same parent heritage breed: the Araucana.

Cream Legbars are a mix of Leghorns and Aracuanas. These breeds provide the Cream Legbar with a solid egg-laying capability from the Leghorn and blue/green eggs from the Araucanas.

Ameraucana chickens get their blue egg laying from Araucana too  – as well as their signature muffs and beards too!

However, just because they share the Araucana as a common ancestor, breeding through the ages has made them very unique breeds.

Cream Legbars and Ameraucanas differ in their egg-laying abilities and characteristics, as well as their temperament and personality. 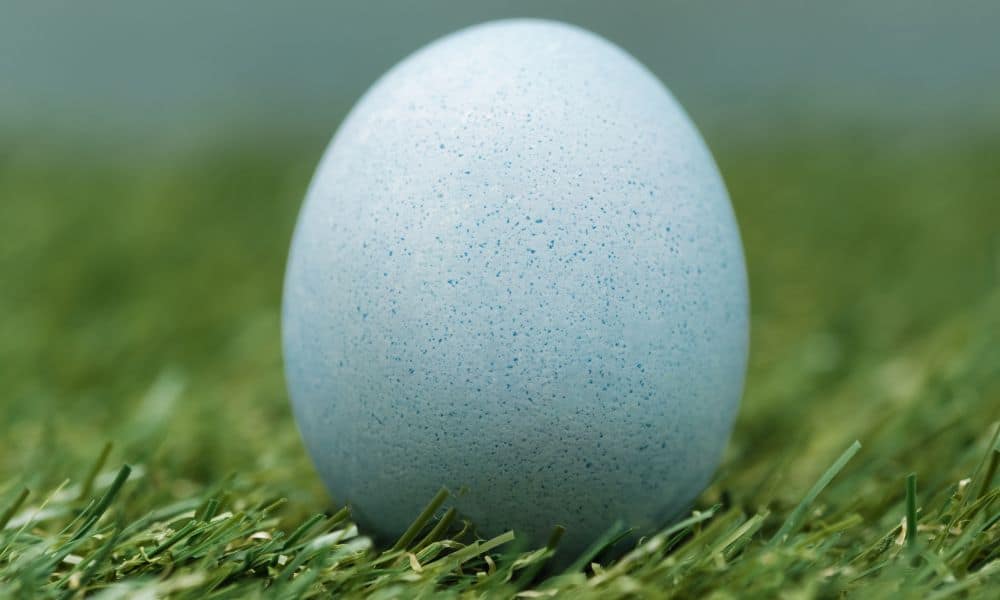 Let’s start off with their most renowned quality – the Cream Legbar and Ameraucana’s blue eggs!

Sure, we know both Cream Legbars and Ameraucana lay beautiful blue eggs, but are they exactly the same?

So just how much do the Cream Legbar & Ameraucanas eggs differ?

So, the color and frequency of eggs laid don’t really differ between Cream Legbar and Ameraucana’s, but the size of the Ameracuana’s eggs is visually larger.

It’s worth mentioning, however, the actual blueness, size, and quantities of eggs laid can vary highly depending on the actual individual chicken. 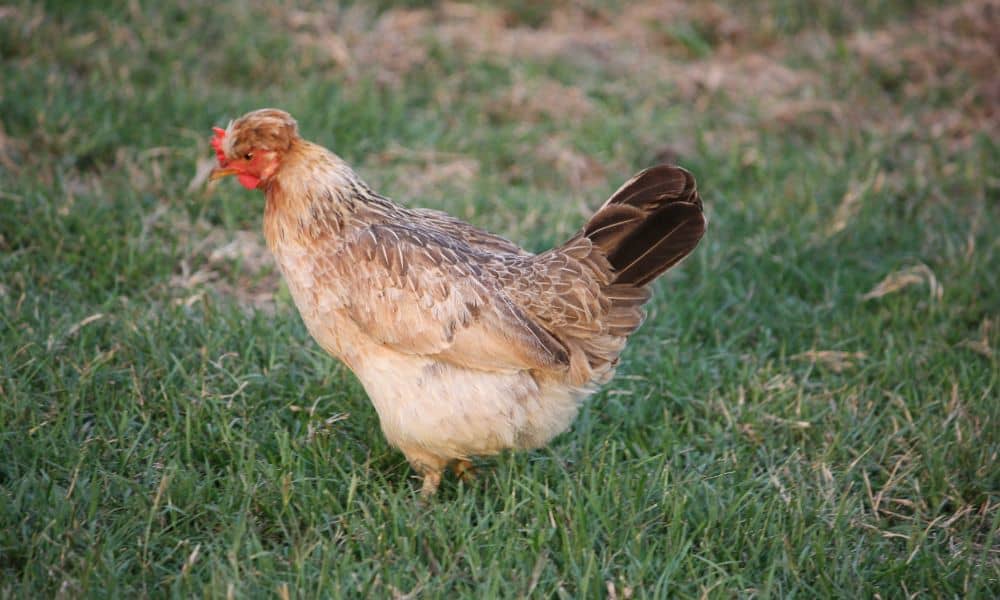 After egg laying, the next most important quality to look at is the differences in Cream Legbar and Ameraucana chicken’s temperament.

In fact, this is often a top priority for those looking to raise genuine companions or pets, rather than just simply farming their eggs.

Cream Legbar chickens are rather easygoing and are very sociable chooks. Their exceptional foragers and do better in larger spaces.

But, Cream Legbars and be a little feisty compared to more classical docile chicken breeds.

On the other hand, Ameraucana’s are more curious and approachable. They’re very laid back and are usually less likely to be aggressive compared to Legbars (even Ameraucana roosters)

Of course, a chicken’s temperament can vary substantially depending on its individual personality and environmental conditions.

What About Overall Hardiness?

When we talk about hardiness, we’re looking at the chicken’s ability to tolerate heat, cold, and sickness.

Some chickens can be more vulnerable than others in one or more of these areas.

When it comes to Cream Legbars and Ameraucana chickens – both do great in cold weather – partially because their comb and wattles are covered by their crest (Legbars) and muffs/beards (Ameracuanas).

Ameraucana’s and Cream Legbars both do OK in the heat, as much as the next chicken.

So, both Cream Legbars and Ameraucana’s are rather hardy overall. From this perspective, they can both make great backyard companions regardless of their climate.

Legbars Or Ameracuana: Which Is Best? 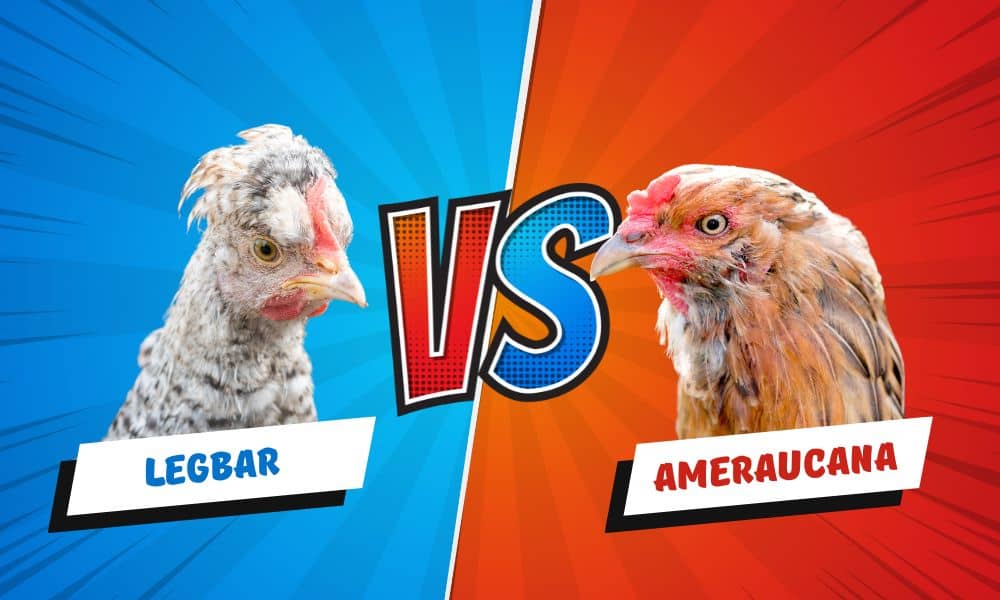 So, which blue egg layer is superior?

Well, it depends on what you’re most excited about as a chicken owner.

Here’s a quick highlight of each breed:

So, the chook that’s better to raise depends on your individual preference – as seemingly they can both make the perfect addition to a backyard flock.

If you’re looking at these chooks because of their gorgeous blue or green eggs but you haven’t quite made the decision on which to add to your flock – you may also want to check out:

So there you have it – although both Cream Legbar and Ameraucana chickens lay blue eggs, they have just as many differences as they do similarities.

Sure, they’re both equally as cold or warm-hardy, but their temperaments make them more or less suited to different backyard environments.

Still, they’re both amazing in their own right – so I’ll let you decide on which one you prefer!

Not to be biased, but we like our Americauna’s.