Not everyone has the opportunity to source and raise Faverolles chickens.

So if the opportunity arises for you, I’d say it’s time to seriously consider raising these amazing creatures.

But, before going head first and buying up as many Faverolles chickens as you can get your hands on, you should know exactly what you’re getting yourself into!

Yes, Faverolles chickens aren’t just a pretty face. They are quite unique, clever, and have hilarious personalities.

Here’s everything you need to know about Faverolles chickens, from their unique appearance to their temperament and behaviors, and all about their egg laying.

All About Faverolles Chickens 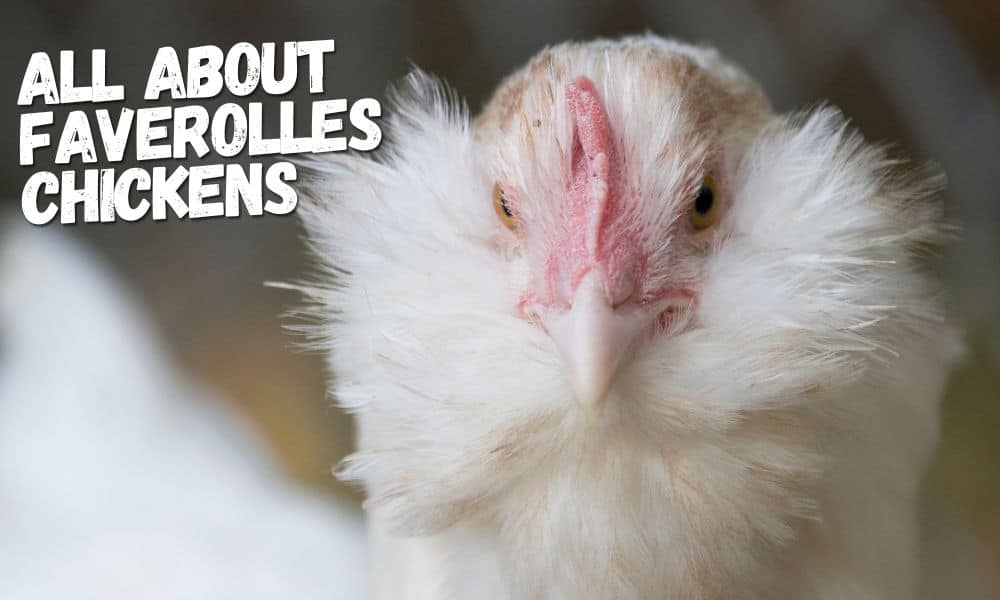 Faverolles chickens, sometimes referred to as Salmon Faverolles, might just be one of the most entertaining chicken breeds out there.

At first glance, you might think their fluffy beards, muffs, and beautiful salmon plumage are what makes them so unique, but the real treasure is in their temperament and personality.

They are cold-hardy, are good layers, and are super friendly creatures, making for the ideal backyard companion.

Here’s everything you should know about Faverolles chickens!

Faverolles chickens originated in France in the mid-1800s and were developed specifically to lay throughout the colder months of winter.

They get their name from the tiny village of Faverolles, found in the town Eure-et-Loire.

But, in the late 1800s, they were introduced to England, and their popularity soared.

The famous Salmon Faverolles chicken, named after its unique pinkish-white plumage, was recognized by the American Poultry Association in 1914, while the white variation wasn’t recognized until the 1980s! 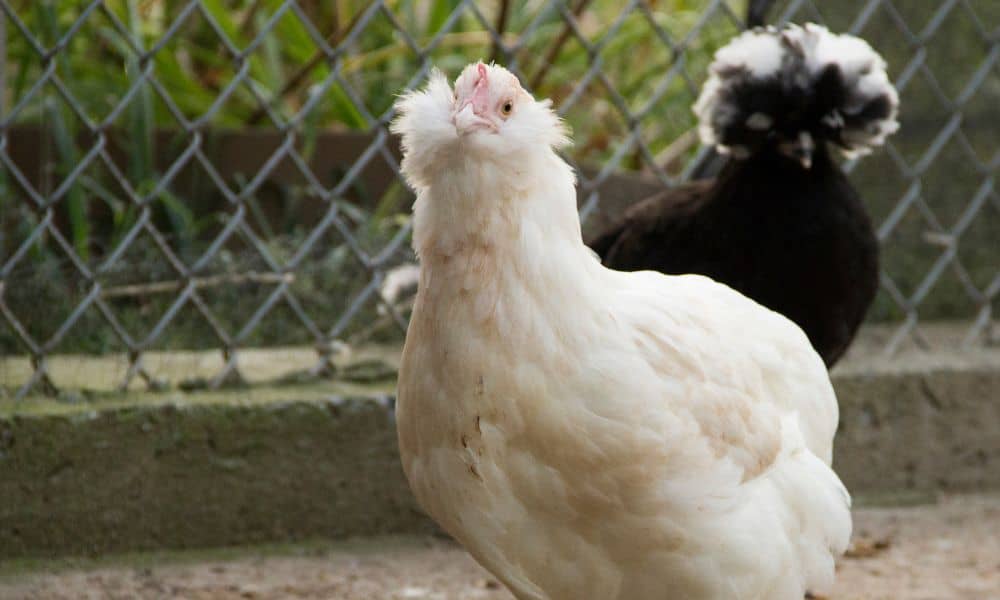 The Faverolles have a medium-to-large-sized build with dense, but light-colored plumage. Its thickness makes a good shield against the cold.

Faverolles also have five toes, instead of the standard four, and their feet are well-feathered.

In addition, they have single combs that are colored red, and so are their earlobes — not that you can see them easily!

The most famous variation is the Salmon Faverolles, named for its beautiful light-pink plumage, but the white variety is just as beautiful!

In my experience, I’d say Faverolles have above-average intelligence, but their open curiosity sometimes makes them appear foolish or ditzy.

Because they are so timid, they often end up at the low end of the pecking order in mixed-breed flocks.

But, they are the type of breed to have their own unique personalities, which leads to hilarious antics and endless hours of entertainment.

While they thrive in a spacious environment, they don’t complain in any space. They are gentle by nature and are certainly not aggressive.

When they’ve been hand raised by humans they are especially friendly with their owners.

And that, my friends, is why Faverolles are so beloved! Because of their amazing temperaments and personality. 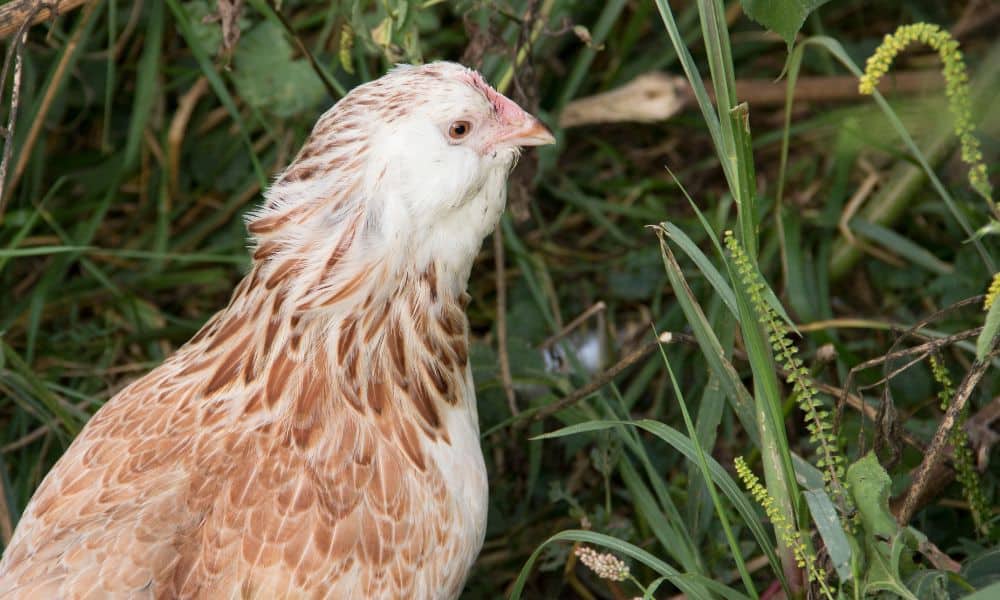 Faverolles are good egg producers, but they certainly aren’t one of the best out there.

Still, you can expect each Faverolles hen to lay about four eggs a week on average, up to about 150-200 eggs per year.

Faverolles lay medium-sized brown eggs, and due to their cold hardiness they will continue to lay all year round – even through the colder winter months!

You can expect your Faverolles hens to begin laying from as young as 5 months old, but naturally, some hens will take a little longer.

From 6-7 months old, Faverolles hens will be reaching their peak egg production, and you can expect them to lay consistently for a good 3-4 years before production slowly declines.

How To Tell Faverolles Roosters From The Hens 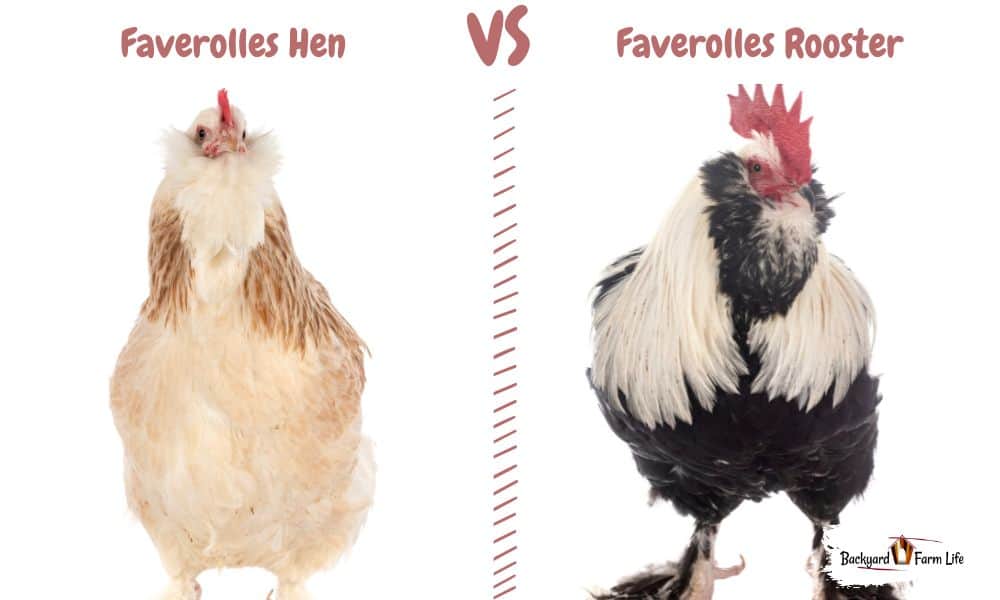 There are many chicken breeds where roosters and hens appear very similar, like Silkie chickens for example.

However, Faverolles hens and roosters appear very different from one another, even from as young as a few weeks old.

To tell the difference between Faverolles roosters and hens you can look for:

Faverolles roosters are one of the timidest out there and hardly ever show any aggressive behavior.

One notable behavioral difference that Faverolles roosters will display is a bit more confidence and less skittishness than Faverolles hens.

For those chicken owners that love to form close relationships with their flock, Faverolles roosters make for amazing companions – without any fear of aggression or feistiness!

Still, there are exceptions to the rule, and individual temperament can differ between roosters and can depend on their raising conditions too. 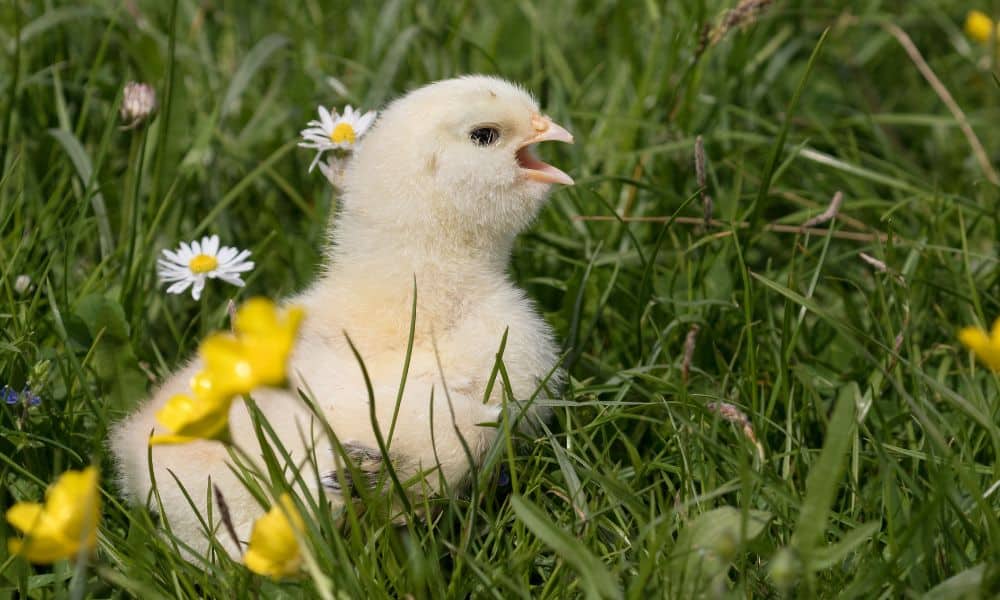 Faverolles baby chicks are absolutely adorable. From as young as a few weeks old you can actually see their beards and muffs already growing!

This is quite a unique feature of Faverolles, as other bearded chicken breeds like Ameraucana’s take a lot longer to grow out all their plumage!

You can also tell whether the baby chicks are male or female as they will begin to show their different plumage colors from as young as 2-4 weeks old!

Not being biased here, but Faverolles chickens are truly incredible.

Even though they don’t lay as many eggs as your standard high-production breeds, they make up for it with their amazingly timid and friendly temperaments and their hilarious personalities.

They mature quickly, which is great for those that want eggs quickly, and even those that are considering raising them as broiler chickens.

So, if you get the opportunity to raise Faverolles you should seriously consider it!