What Time Do Roosters Crow (& Why They Do It!)

I’m sure we’re all familiar with a rooster crowing in the morning. But it’s not the only time a rooster will let out its loud, somewhat obnoxious cry.

For those that own roosters, you may have noticed they seem to have some set times throughout the day where they will crow, almost routinely.

But, once you learn these routined times, it’s certainly strange the hear them crow at other, seemingly random times throughout the day

So, if you’ve heard a rooster crow at an unexpected time or if you’re simply curious, here’s why roosters crow in the first place, what times they normally crow, and what it means if they crow and night or other times throughout the day.

Why Do Roosters Crow? 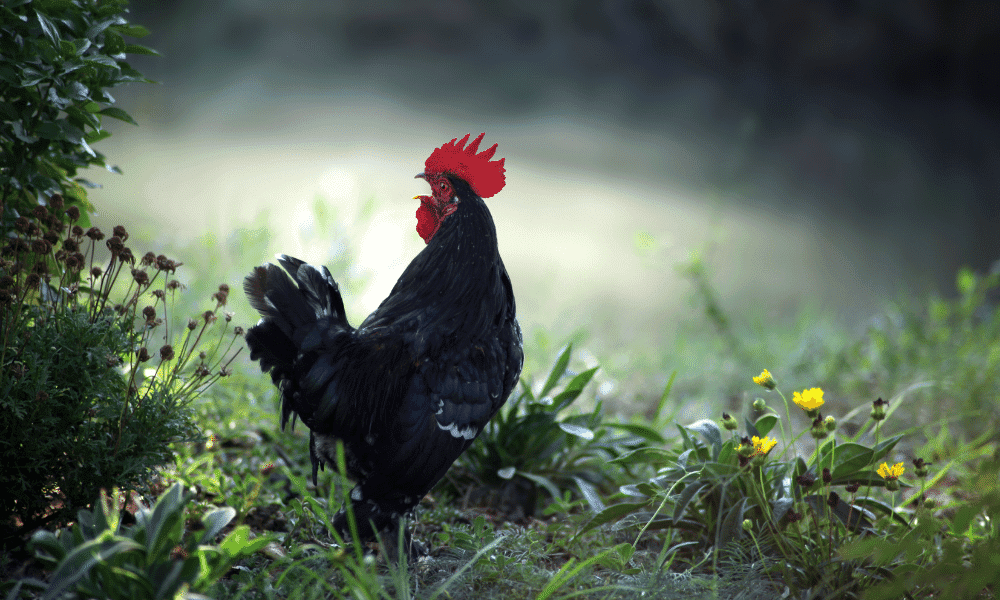 If you’ve ever been woken up by a rooster, perhaps earlier than you would have liked, then chances are you’ve got that distinct screaming noise imprinted in your brain: a rooster’s crow.

But, as you cover your ears with your pillows and try to block out the sound, have you ever thought to yourself: why do roosters crow anyway?

Well, as it turns out, it’s not just to annoy their owners!

In fact, roosters crow for more than a few reasons, including:

However, it’s important to note that roosters will also crow in response to a range of seemingly random stimuli, from the sight of a bird in the sky to the sound of a truck driving past.

To Announce The New Day

Roosters aren’t the only birds to sing in the morning. The problem is they’re simply tone-deaf!

Originally it was assumed that roosters would crow in the morning as a response to the change in light. While not entirely false, a scientifically conducted experiment determined it’s actually controlled by a rooster’s internal biological clock, the circadian rhythm.

This internal clock is guided by stimuli such as light, but their crowing isn’t simply a response to light.

This was suggested in the study, and it was concluded that roosters actually crow in ANTICIPATION of the light, in order to wake their flock up, ready for the day (amongst other reasons).

As A Celebration Or To Communicate

On some occasions, roosters will crow routinely, like in the morning.  However, there are other occasions where a crow can be used as an expression of celebration.

This type of crowing is most often witnessed after a successful courtship, but it can really follow any perceived success from the rooster’s point of view.

Roosters are driven by social conquest and are territorial by nature. It’s in their nature to create and maintain a social hierarchy known as the pecking order.

In the absence of a rooster, the lead hen will often assume the position of top chicken. On the flip side, if there are multiple roosters in the flock, there will still only be one top-chicken, normally followed by the lower-ranking roosters.

Top-roosters are normally the first to crow in the morning and those who crow most often during the day. It’s a way of demonstrating their power and maintaining social order within the flock.

Interestingly, one study found that when the most dominant rooster was physically removed from the flock, the next in line would assume the position and begin the crow in the morning.

This suggests those roosters who aren’t top-ranking will actually suppress their drive from their circadian clocks, and for the sake of the pecking order, allow the top rooster to start the crowing first.

What Time Do Roosters Crow? 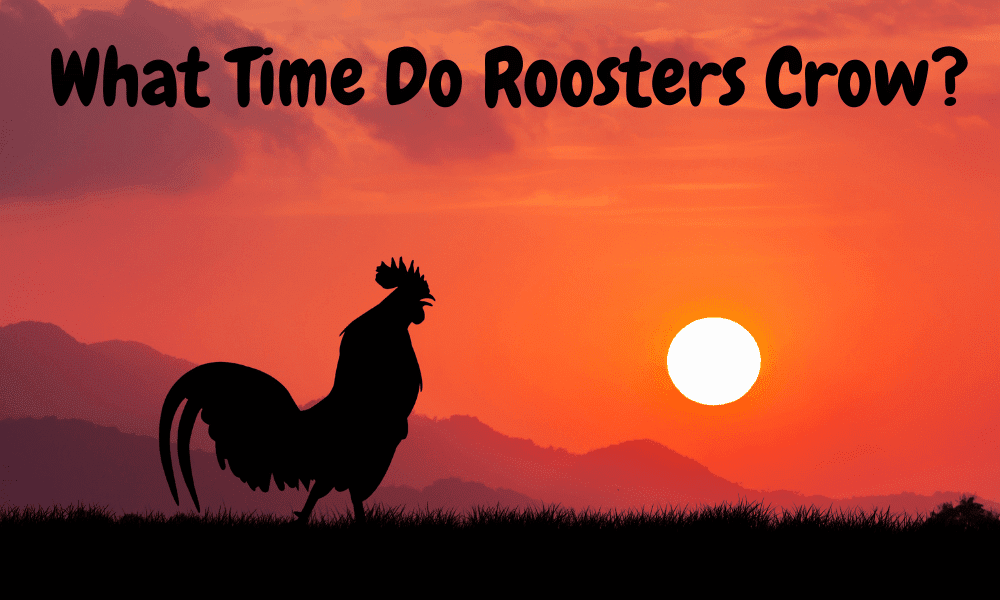 Due to the common anecdote of a rooster crowing early in the morning as a wake-up call, some believe this is the only time a rooster crows.

But in fact, there are several times throughout the day when roosters are more likely to crow. Some of these times may seem more random than others, as roosters can crow as a response to many different circumstances.

Nonetheless, roosters will routinely crow just before first light, reactively throughout the day for various reasons, and commonly at dusk.

It’s because of this constant noise that it’s often illegal to raise roosters in many residential areas, violating noise ordinances.

Roosters Crowing In The Morning

Depending on where you are living, and whether or not it’s daylight savings, roosters will generally crow in the morning between about 4:30 am – 6:00 am.

The lead roosters will let off a loud and thundering crow, alerting their flock that it’s time to start a new day. This initial crow may be followed by other roosters’ crows, or the lead rooster may decide to let off another series of crows shortly after.

In terms of exact timing in the morning, it can differ depending on the external stimuli that influence the biological clock of a rooster.

However, it’s said that these clocks work at intervals of 23.8 hours on average, so it’s not uncommon for a rooster to crow slightly earlier and earlier in the morning until something resets it.

As roosters are normally brilliant protectors of their flock, it’s not uncommon for a rooster to give a cock-a-doodle-do crow as the sun is setting. This can be between 5:30-7:00 pm and is normally a signal to their flock to finish up for the day.

Roosters may even crow at dusk as a territorial behavior, warning any intruders close by that this territory is theirs.

Is It Normal For Roosters To Crow All Throughout The Day? 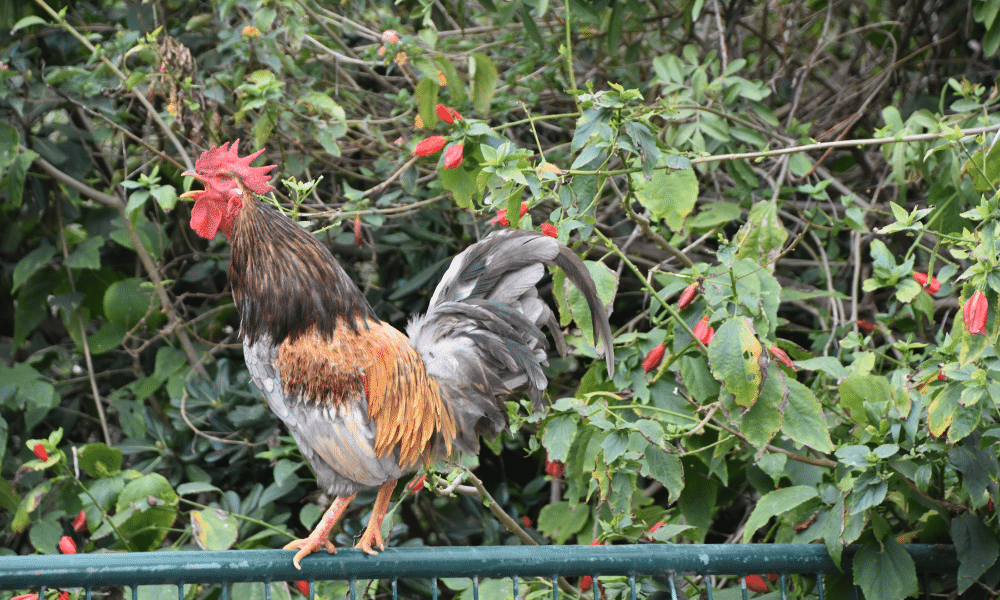 Although it’s known that roosters have morning routine crows, guided by their biological clock, it’s normal for roosters to crow at all other times through the day too.

It’s possible for a rooster to crow at any time throughout the day and night, as a simple reaction or response to something that makes them feel like crowing.

The normal suspects are loud noises, the appearance of a predator or unknown animal, or in celebration of courtship or other activity.

In addition, crowing is their way of communicating with other flock members and helps shape the social hierarchy.

So don’t be alarmed if your roosters are crowing at random times throughout the day — it’s completely normal!

Do Roosters Crow Every Morning?

Typically yes. Given that a rooster’s crowing is largely determined by their internal clock or circadian rhythm, roosters will routinely crow just before the break of day.

This constant routine of crowing in the morning is guided by light, but is not determined by it. This is evidenced as some roosters will actually routinely crow in anticipation of the light, not by the light itself.

Therefore, it’s almost impossible to stop a rooster from crowing in the morning, every morning. They are just far too determined by their nature!

Should Roosters Crow At Night (Midnight, 2 am, 3 am)

Although it’s not common, it is possible for roosters to crow at any time of night.

This is normally in response to a predator, artificial light, or something else going on in the coop!

If you’ve found that one of your roosters is constantly crowing at the same time every night, whether it’s midnight, 2 am, or 3 am, it’s best to do some investigations.

Something is causing your rooster to feel the need to crow.

If you’ve got artificial lights around your chicken coop, this could be having a negative effect on your rooster’s internal clock, causing them to crow much earlier than expected.

Otherwise, it could even be a motion-sensor light going off in response to a nearby animal moving past it.

It could even be that the coop is being visited by a potential predator at night, and the crowing is a warning to the predator and to your flock!

It’s not common nor is it normal for roosters to routinely crow throughout the night, and it’s almost always a response to something.

Roosters can crow for a whole range of reasons at any time during the day or night.

A rooster’s biological clock, the circadian rhythm, tells the rooster to crow in the morning, at or just before first light. This is the duty of the lead rooster, to announce the new day to their flock, and to maintain the pecking order.

However, roosters will also crow throughout the day for a variety of reasons, including communicating with their flock, celebrating, or in response to a predator.

It’s much less likely a rooster will crow at night, but if they are crowing at midnight or in the early hours of the morning it’s likely it’s as a response to something, rather than their biological clock telling them to do so.