How High Can Chickens Fly (All Breeds & Sizes)

There are many misconceptions and myths about chickens. This leads to so much misinformation for new chicken owners and even us experienced backyard farmers.

It’s commonly thought that chickens are flightless birds. Although it’s true that through the ages of domesticating and farming these animals they have lost their ability to fly, for the most part, it doesn’t mean they fly at all.

So, if you’re wondering if your chickens will be able to fly over the fence, or out of their enclosed space, or are just curious in general – fret not. Here we go through how high chickens can fly, for all types of breeds, plus some tips on how to control your chicken’s flight.

How High Can Chickens Fly?

The ancient chicken ancestors might have managed to fly a lot higher and longer distances, but after centuries of domestication and selective breeding, chickens developed a much smaller wing-to-weight ratio. Now the common chicken’s wings are so small they are unable to support their heavier bodies.

Nonetheless, how high chickens can fly depends on a few factors. Firstly, their breed, as some are known to be a lot heavier, lighter, or smaller than others. Secondly, it will depend on your chicken’s weight, if they are overweight or underweight for example.

In the end, most chicken breeds will rarely fly at all and at most can only fly as high as 2-4 feet off the ground. However, some lighter chicken breeds are able to fly higher and longer than their heavier breed counterparts.

A “heavy” chicken breed encompasses the most common farm and backyard chicken varieties and breeds. These include most laying breeds of hens such as ISA Brown, Golden Comet, Red Ranger, Orpington, Plymouth Rock, etc.

All of these standard chickens and laying hens aren’t able to fly very high or far at all. In fact, many of these chickens will often avoid flying at all unless startled, simply due to the difficulty of doing so. So, for these chickens, they won’t often be able to fly higher than 2-3 feet.

You can tell your chicken is classified as a heavy breed simply by looking at their appearance, if they look like they have large hips, bottoms, and breasts then you can safely classify them as a heavy chicken. Brahma hens and roosters and Cochin chickens are amongst some of the biggest and heaviest

How High Can Bantam Chickens Fly? 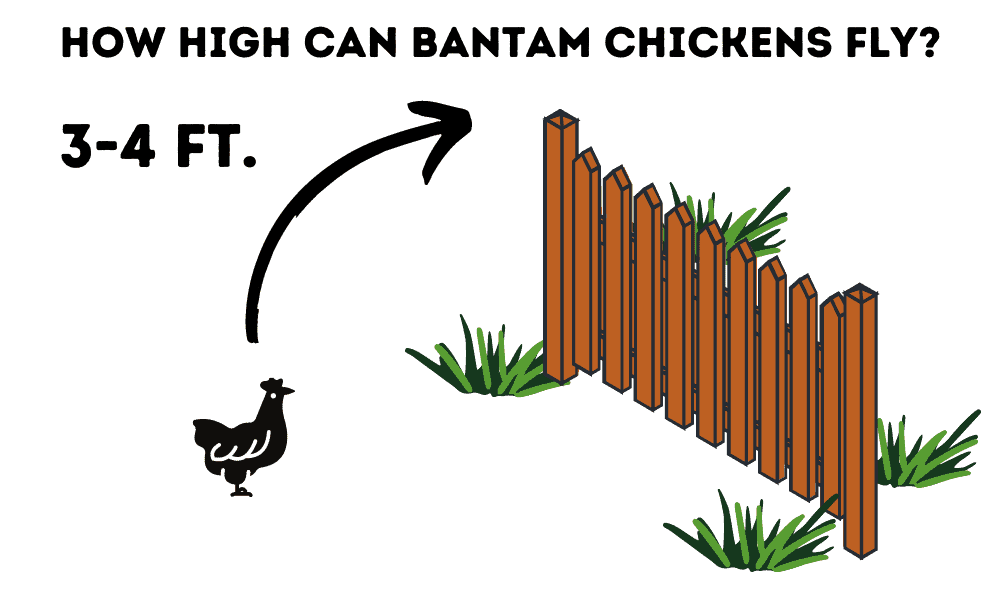 A Bantam chicken refers to any smaller, domesticated breed of chicken. These are much more commonly owned for their temperament or beautiful physical appearance rather than for their egg-laying or for meat production.

Bantams are generally much lighter chickens, but because they are so small their wing-to-weight ratio is about the same. This means bantam chickens can’t fly very high, but can comfortably reach heights of between 3-4 feet if they need to.

So chickens like Sebright, Japanese bantam, Serema, and Silkie chickens can fly, but not high enough to scale most fences.

How High Can Light Chickens Fly? 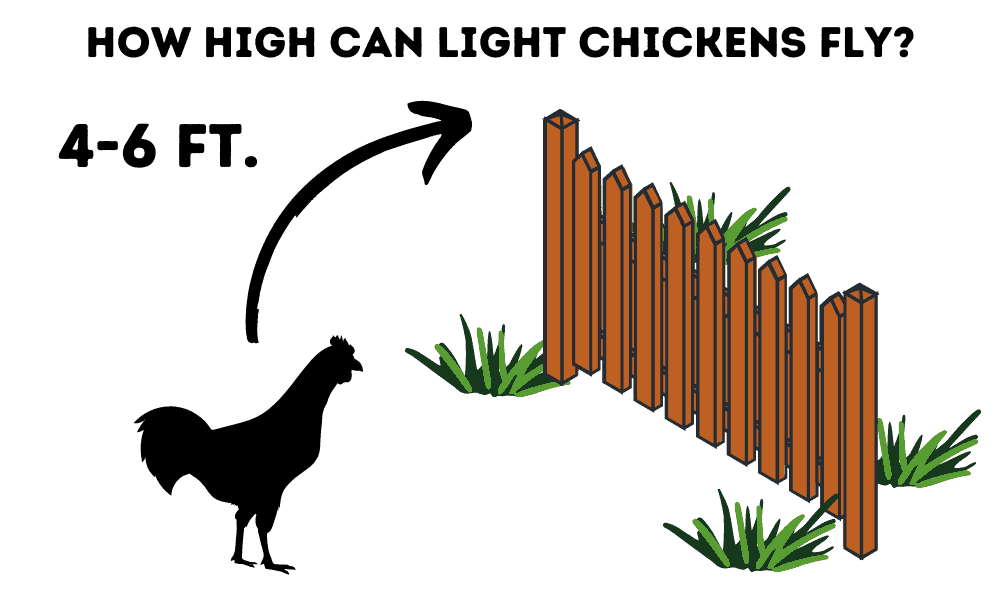 Most bantams are light, but some have equally small feathers which still means they can’t fly higher than 3-4 feet high. But, there are some bantams and some other lighter “larger” chickens that can actually fly a lot higher, even up to 4-6 feet high.

These are chickens like the Houdan, Some Polish, Norfolk Grey, Cornish, and some Leghorns to name a few. Often you can tell if your chickens are light as they have much smaller bellies and bottoms, and larger wings.

Although these chicken breeds are much less common, there are backyard chicken owners who house these beauties.

Why Do Chickens Fly?

Although chickens spend all their time on the ground, whether it’s for laying eggs, foraging, or just going about their daily routines, they occasionally fly for various reasons.

After all, chickens are quite vulnerable creatures, so they will use everything they’ve got at their disposal to avoid or escape predators or perceived danger.

The main reasons chickens fly is:

Will My Chicken Fly Over My Fence? 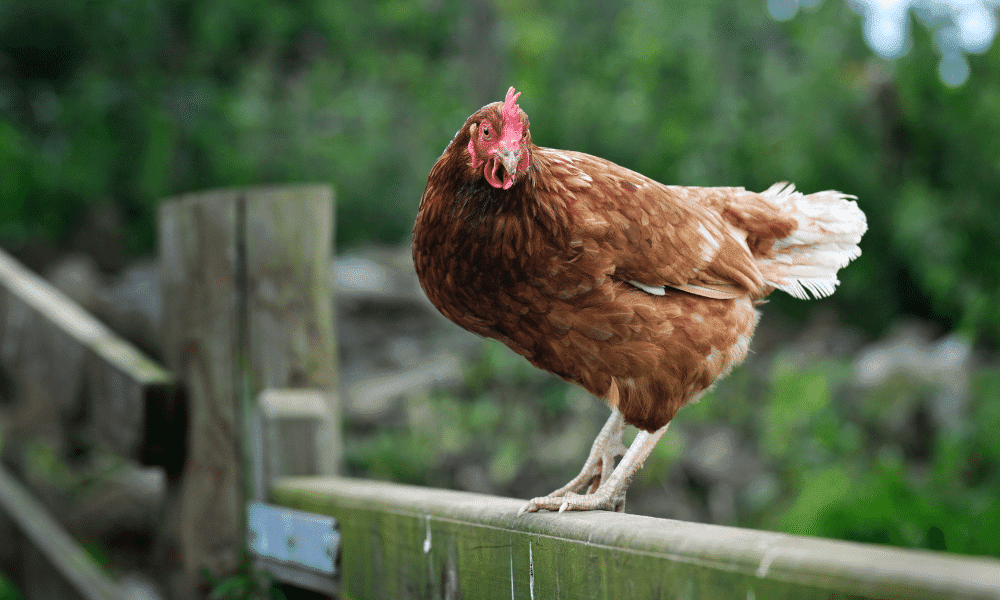 To be clear, it’s not ordinary for chickens to fly, and it usually will only do it in response to a threat or perceived danger. This means it’s unlikely that your chickens will actually fly over your fence, particularly if it’s a medium-to-tall height fence, from 4-8 feet.

However, whether you’ve got yourself some normal laying hens, larger breeds, or bantam breeds, chickens are entirely capable of jumping or flying over low fences.

This is something you have to prepare for, and ensure your environment is sufficient to safely enclose your flock. You may be able to control the conditions in your own backyard, but if a curious chicken flys the fence then it can be met with much less favorable conditions!

How High Can Chickens Jump With Clipped Wings?

Clipping your chicken’s wings should only be done if absolutely necessary. Although it’s not entirely harmful to your chickens, their flight is a natural action that they can use to escape predators if required.

However, if you have low fences and it’s essential to keep your chickens in your yard, then it can be done to limit their ability to fly.

Chickens with their wings clipped will only be able to jump about 1-2 feet high, and so won’t easily be able to escape even the lowest fences.

Still, they will easily be able to jump up to their nesting boxes, provided they aren’t higher than about 24 inches tall. Still, offering at least one ramp will ensure they can comfortably reach them!

Other Tips To Keep Chickens In Your Yard

In most cases, chickens won’t actively try to escape their yard, as they can recognize the coop and environment are safe.

However, this doesn’t mean they won’t get out by accident. If you do want to be extra sure your chickens will stay in your yard here are a few tips:

Even though chickens do have only small wings and rather oversized bodies they are capable of flight – it’s just a matter of how high and how far.

A normal backyard chicken can be expected to fly as high as 2-4 feet, with bantam chickens and lighter chickens being able to fly just a little bit higher, up to 6 feet on the very top of the scale.

Nonetheless, chickens won’t often fly unless they feel threatened or are trying to escape, so if you’ve got some decently high fences you shouldn’t have to worry about your chickens getting out!

2 thoughts on “How High Can Chickens Fly (All Breeds & Sizes)”