Anyone who has ever had the pleasure of raising Cochin chickens will tell you that these aren’t just any ordinary chooks.

Cochin chickens can be raised for their meat, egg production, as a popular ornamental breed, or just for their true companionship as backyard chickens.

But, no matter how you plan on raising your Cochin chickens, it’s important to identify whether you’ve got yourself hens or roosters.

After all, if you’re hoping for eggs and you’ve only got roosters, well, you’ve got yourself a problem!

So you can plan your flock accordingly, here are all the differences between Cochin hens and Cochin roosters and how you can tell the difference at any age, from baby chicks to maturity.

Cochin Hen Or Rooster – All Differences 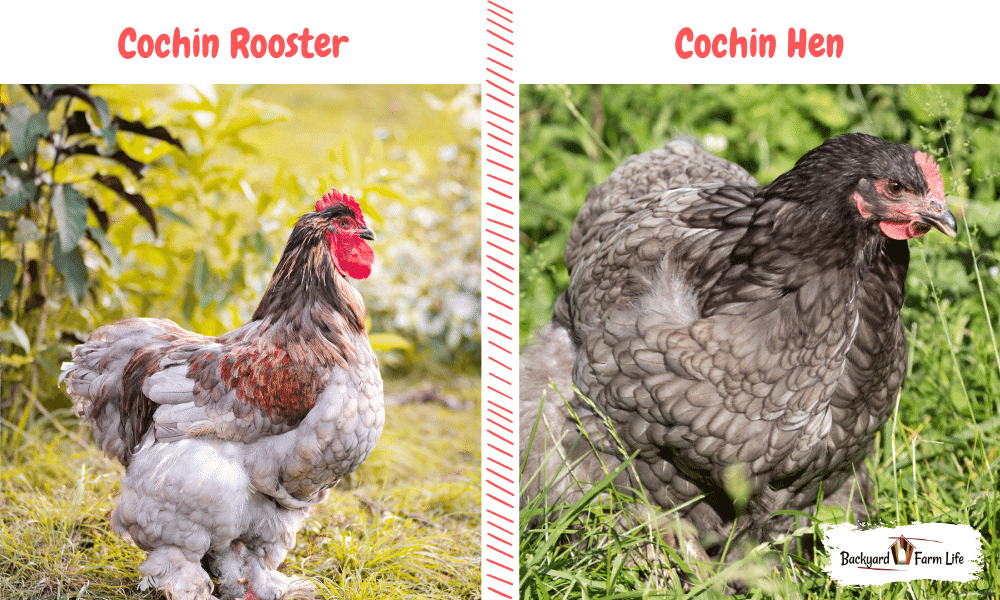 Although the Cochin chicken originated from China, thier popularity grew exponentially along with Brahma chickens between 1845 and 1855 in a hilarious social phenomenon known as “Hen Fever”.

The result of this “Hen Fever” was an outrageous amount of breeding of Cochin chickens, amongst others, leading to the wonderful chook we know today.

Nowadays there are more than a handful of different types and colors of Cochin chickens.

But, for those that are looking to identify whether they have Cochin hens or Cochin roosters, there are still a few key common characteristics you can look out for:

It’s not uncommon in the animal kingdom for males of a species to be larger than the females.

Similarly, when it comes to chickens of any given breed, the roosters are normally larger than the hens, and Cochins are no different.

At maturity, these plump and fluffy Cochins certainly show a size difference:

Cochins are considered large chicken breeds, and can’t fly or jump higher than about 2-3 feet.  Their full body and large size slow and weigh them down.

Though some varieties might have more frizzled and curled feathers, overall their plumage makes them appear somewhat chunky, which is absolutely adorable.

Still, there are some differences between a Cochin hen and Cochin roosters plumage.

For one, Cochin hens plumage color tends to be all of one kind, whether it’s black, buff, or other.

On the other hand, Cochin roosters are often multi-colored, with their tail feathers and hackle feathers standing out from their bodies. This isn’t always a certainty, but it’s certainly a trend.

Cochin roosters also grow much more prominent tail feathers and hackle feathers around their necks too, even from as young as 10-14 weeks old!

There are very few chicken breeds that don’t conform to the rule that males have larger combs and wattles than the females, like Leghorn hens vs. roosters for example.

In the case of Cochin chooks, roosters display much more prominent combs and wattles than the hens.

For those that are raising their own Cochins, you can start to look out for this tell from as young as 8-12 weeks old!

Though Cochin hens do still grow out their wattles and combs, they take longer to develop and aren’t as grand as those of a Cochin rooster.

Aside from the physical differences between a Cochin rooster and hen, behavior is also a reliable tell.

For one, Cochin roosters will crow, and find their voice from as young as 16 weeks.

Cochin hens will start laying from as young as 8 months old too, something that a rooster certainly cannot do!

Setting aside these clear male and female anatomical behaviors, Cochin hens are also much more timid and submissive than Cochin males. 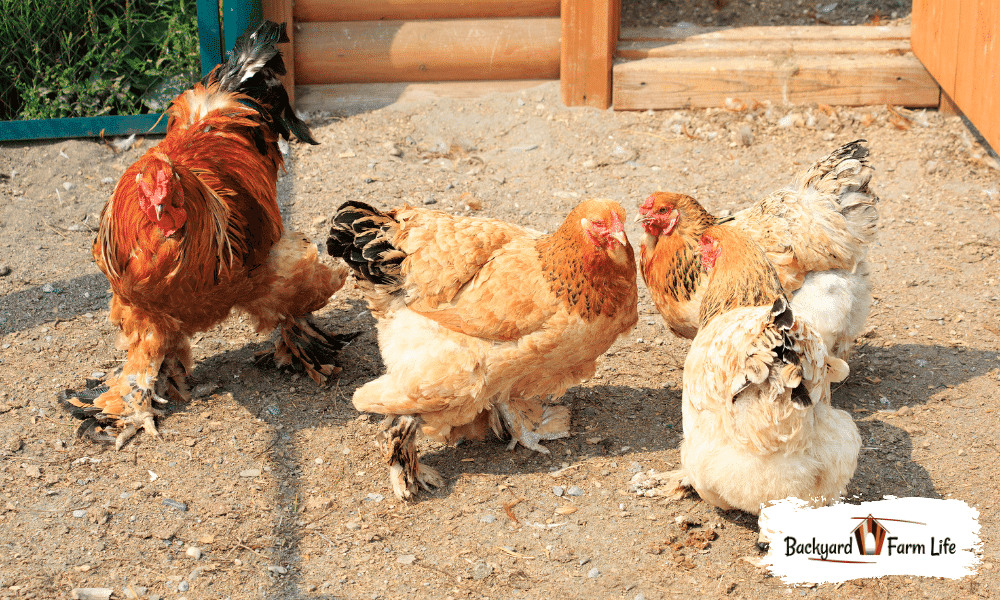 For the icing on the cake, no matter whether you’ve Cochin roosters or hens you can expect some wonderful characteristics.

For one, Cochins aren’t known to be very loud chooks, which makes them highly desirable for a suburban living – so long as you’ve got enough space to raise them of course!

Cochins certainly are beautiful chickens too, having feathers from their head to their feet. Many chicken owners purposefully seek out chickens with feathers on their feet – deeming these fluff balls the most beautiful.

Lastly, Cochins are far from aggressive. This makes them perfect companions to other pets or for those with young children too.

All the more reason to raise Cochins, right? 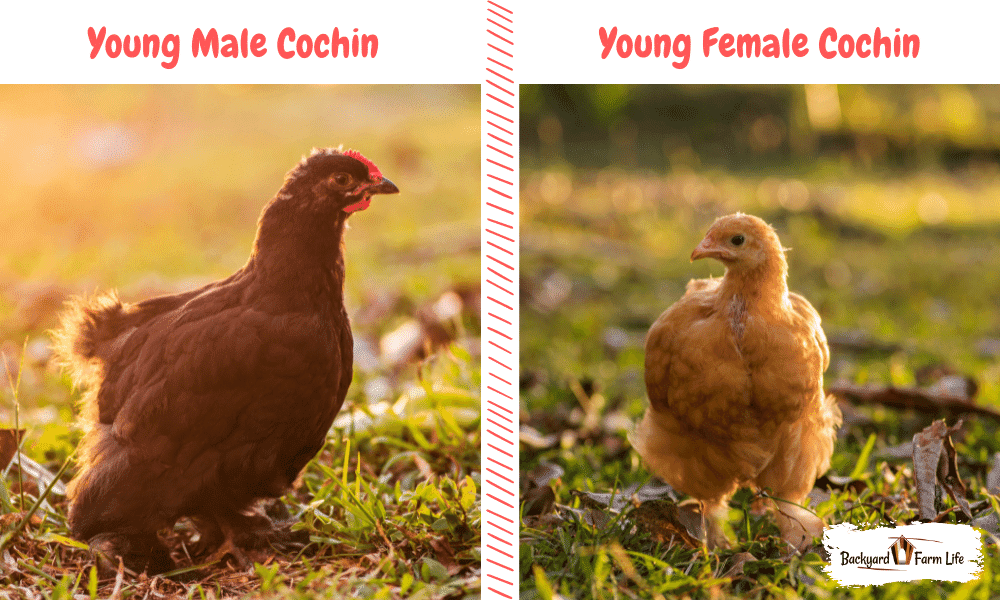 Without the expertise of a professional who is competent and trained in vent examinations, it’s hard to identify a Cochin’s gender in their early days.

But luckily, as your baby Cochin chicks grow there are a few tells to look out for which suggest they are either males or females.

These aren’t too different from what sets Cochin roosters apart from Cochin hens at maturity, they just develop at different stages of the baby chicks’ life.

Behaviorism Is A Tell (4 Weeks+)

While the behavior of week-old Cochin chicks hardly differs between the males and the females, you’ll start to notice some slight behavioral differences from as young as 4 weeks old.

Although this isn’t a certain tell of a male and female, male Cochin chicks have a tendency to show more curiosity and feistiness.

This basic behavior difference will continue to develop as your Cochins grow so it’s always a good thing to look out for when trying to determine the gender of your baby chicks.

Early development of a comb and wattles is a clear developmental characteristic of a male!

For Cochin males, you can start to see a small, pink-to-red, pea-sized comb from as young as 4 weeks. This comb, along with the development of wattles continues and is much more obvious from 8-12 weeks old in male Cochin chicks.

Although Cochin females will also grow combs and wattles, normally they take much longer to show and develop.

So watch for comb and wattle growth!

From 12 weeks onward you might also visually see some size differences coming into effect. This is because male Cochin chicks develop a touch faster than females, and they end up growing larger too.

Although it’s not obvious at a young age, from about 12 weeks it can start to become more noticeable.

Although slight at first, from about 10-14 weeks you’ll be able to notice a slightly thicker and larger hackle plumage on Cochin roosters compared to Cochin hens.

A Cochin hen’s hackle feathers will seemingly blend in with their bodies, but Cochin roosters will have a more segmented hackle to their bodies.

From 14 weeks or more, a Cochin rooster’s tail feathers will appear fluffier and bushier too! 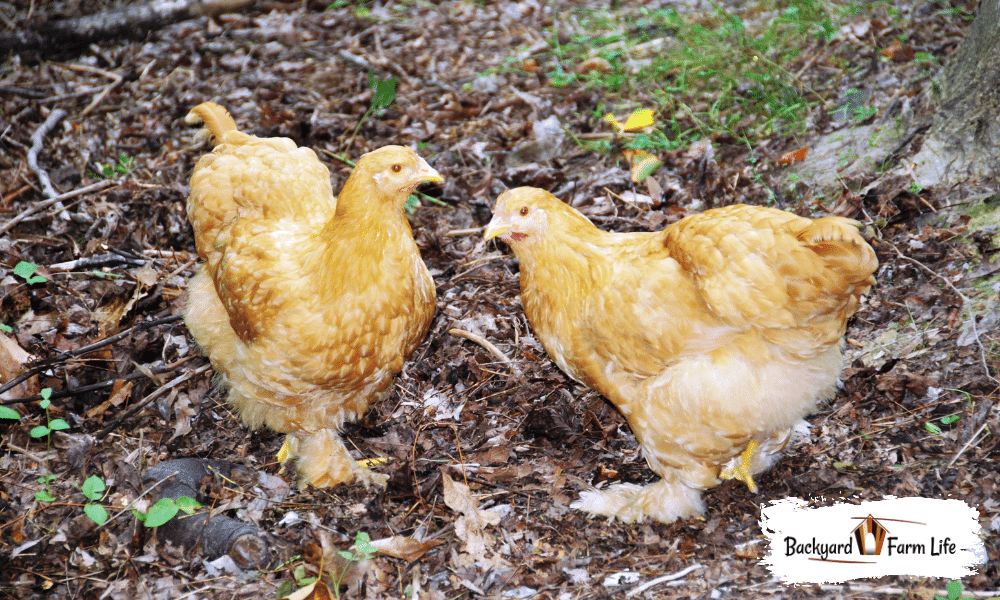 With such a rich history, amazing personalities, and true multi-purpose use, it’s no wonder Cochin chickens have remained a popular choice for backyard farming all over the world.

At maturity, it’s not too difficult to spot the roosters from the hens. But it can be a bit more challenging at younger ages.

As your Cochin chickens grow take a look out for early comb and wattle growth, basic behavioral differences, their overall size, and their hackle and feather plumage.

Take another look at your flock, see if you can pick up some of these key differences, and let me know your thoughts!