Chickens Sleeping Habits: What Time Do Chickens Go to Bed?

Chickens are creatures of habit. They don’t sleep in, they don’t stay up late, and their days are seemingly planned out, between eating, foraging, and dust bathing.

If you’re a new chicken owner or simply curious, you may be wondering what times chickens actually go to bed.

This way, you can time it and go to close the coop and run before it gets too dark — and when the chickens have put themselves away to bed!

Here’s more about chickens sleeping habits, what time chickens go to bed, and whether they sleep all through the night

Do Chickens Put Themselves To Bed?

Chickens, just like most animals, use light as an indication of the time of day and plan their habits around when it’s safest to go out to feed and forage, and when it’s time to sleep.

See, chickens naturally feel vulnerable and afraid of the dark as they have poor night vision. They also become more reliant on their other senses which makes them appear more anxious.

This leads to chickens putting themselves to bed around dusk, where they begin to feel safest inside and sheltered.

What Time Do Chickens Go to Bed?

Since sunset comes according to the season and geological position, there’s no fixed timing as to when chickens go to bed. For instance, chickens go to bed early during winter because winter days are shorter than summer days. The same is said for rainy and/or cloudy seasons too.

Chickens will gradually adjust to the anticipation of darkness, and put themselves to bed before it gets too dark, which depending on your location and season could be between 6 pm – 9 pm.

So, it’s best to observe when your chickens stop free-ranging and put themselves away in the coop and run, and set a timer or mental reminder to go out and lock your chickens up for the night at this time.

Do Chickens Sleep All Through the Night? 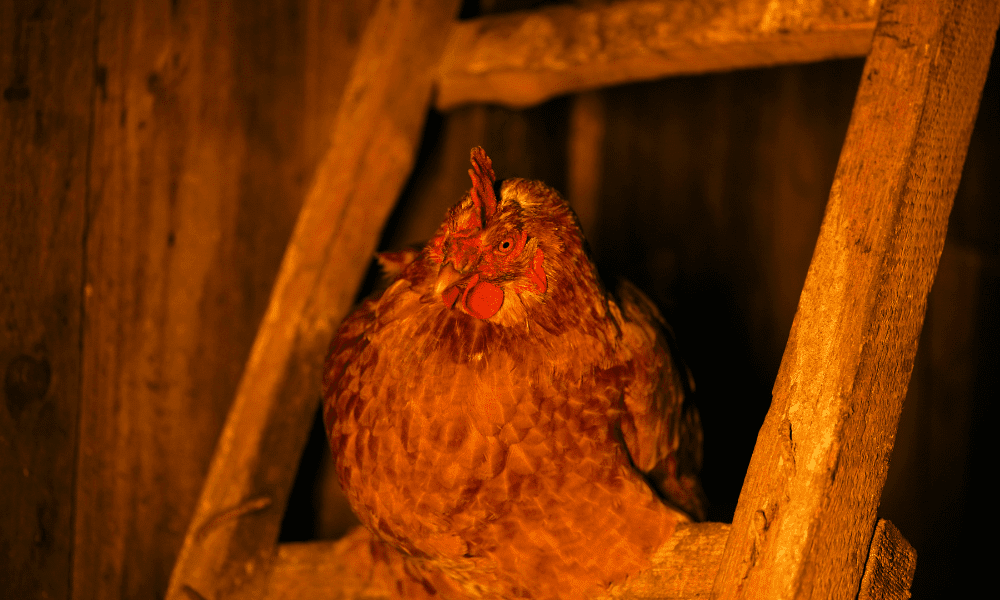 So, if a chicken goes to bed at dusk and sleeps at sundown, do they actually sleep all through the night until dawn?

It’s a fair question as if chickens are awake and active at night, they may need food or water, right?

Well not exactly. Of course, chickens will sleep most of the night, but a simple night cam will show that your chickens don’t exactly sleep ALL through the night. The same is said for other poultry too, which is why you sometimes hear ducks quacking at night!

You can see chickens rearranging themselves on their roosts, or even moving to another place, however, they spend most of the time asleep until early in the morning.

Furthermore, even though they don’t sleep the whole time they are pretty much completely inactive, and won’t need any food or water throughout the night.

Chickens at the lower end of the pecking order are naturally light sleepers, so they get less sleep than dominant chickens. This is because they’re naturally more alert to the sounds and movements of their surroundings, keeping them awake most of the time.

What Time Do Chickens Wake Up?

Chickens wake up before dawn, as soon as there’s enough light to see. If you have a light timer in the chicken coop, your chickens will be up and about as soon as it turns on. If the coop is shuttered and dark, they’ll remain inside, awake and restless, until you open the coop for the day.  A chicken’s sleep and wake cycle are highly driven by their contact to direct sunlight, which is essential in many ways for chickens.

You might even hear your chickens get loud in the morning if you’ve left them in too long, as they want to start their busy schedules!

To help your chickens get a full eight hours of sleep, make sure to feed them about 40 minutes before sundown. Doing so will prevent them from going hungry through the night. If the chickens return to their coops without a final feeding, they’ll likely become restless and frantic to get out in the mornings.

How To Help Chickens Sleep Comfortably

Although chickens aren’t known to be fussy, providing your chickens with a perfect sleeping environment can help them get sufficient sleep. After all, sleep is vital for a chicken’s overall health and wellbeing.

To give your chickens the best possible sleep follow these tips:

There’s really so much to discuss when it comes to a chicken’s sleeping habits. But, the main takeaways are that chickens will put themselves to bed just as the sun starts to fall.

Your chickens won’t immediately fall asleep but tend to be asleep once the sun is entirely down, depending on your local area.

Still, providing your chickens with the best sleeping conditions can go a long way when it comes to a chicken’s wellbeing. After all, a happy chicken is a healthy chicken.