Why Ducks Quack At Night (& What You Can Do!)

If you’ve raised ducks for a while, you’ve probably noticed that female ducks are generally louder than males.

You might also be aware that not all ducks quack either, or at least in the traditional sense!

But, if you do house your own ducks, one thing you might have picked up on is that some of your ducks will end up quacking at night.

As cute as this can be when it’s quiet, it’s also very curious, especially when it starts to get a bit loud…

If you’ve ever wondered what the quack is actually going on, here are all the reasons why ducks quack at night, and what you can do to help them stay comfortable and quieter throughout the night!

Why Do Ducks Quack at Night? 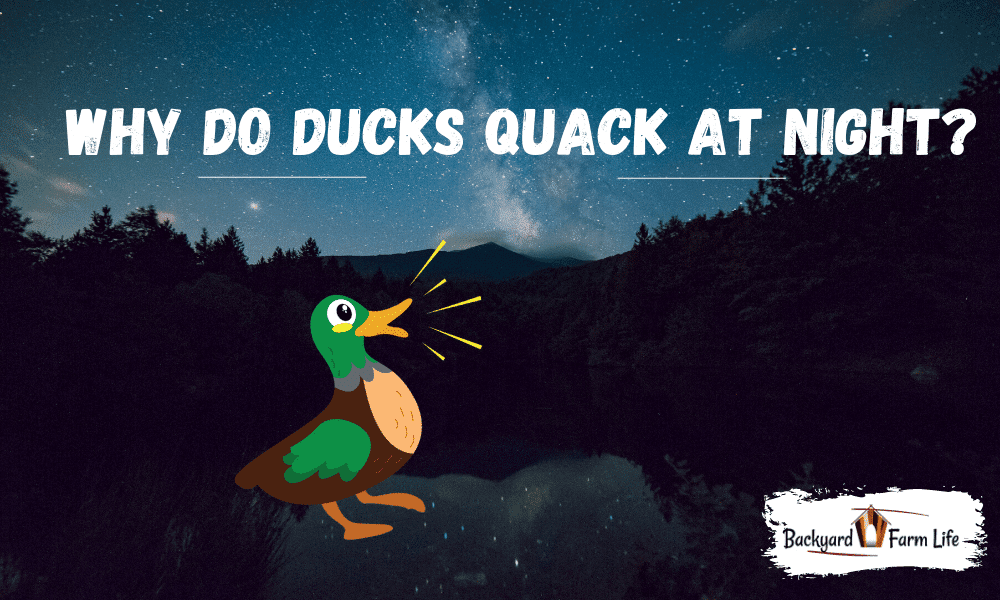 The night is when animals can retreat to a safe and comfortable place to sleep in peace. Ducks generally put themselves to bed at sunset, as chickens do and most other poultry too.

They tend to sleep through the night, wake at dawn, and begin their quackers when they want out of the coop!

So, when you hear ducks quacking at night, you can’t help but be a little bit curious as to what is actually going on.

Usually, ducks will quack at night if they sense predators are close, it’s mating season, or your ducks are awake and feeding. But, it can also arise from an overcrowded coop, loneliness, or even when they are laying an egg!

Here’s everything in detail, to help you determine why YOUR ducks may be quacking at night!

If you don’t often hear your ducks quacking at night, then you hear a sudden uproar coming from the coop, only to rush out to see no apparent cause – then there may have been a predator lurking around.

If a duck sees or senses a nearby predator, it will often let out some quacks to let the flock know, almost like your ducks are crying out. They may even quack at the sight of mice, rats, or other small animals that find their way around the coop.

But, even if there aren’t any predators around, ducks will often quack if they think they are in any kind of danger – which is why it’s crucial to have a well-structured and cozy coop for them!

Ducks have a natural instinct to find a mate generally between the months of December and March.

This is referred to as the “mating season” for ducks. It’s natural that during this time, drakes will act more aggressively, and begin quacking much louder than normal, even at night.

If this is constant and you can’t quieten them down, you can always separate the drakes from the other ducks during this time.

Although this behavior of quacking at night is more common during mating season, they can still quack for the same mating reasons during the other months of the year too!

Your Ducks Are Feeding

If your ducks get hungry at night and leave their coop to the run to get some food, you may hear them quacking as they go about their business.

This can happen more frequently if they get into a habit of feeding late at night.

To combat this, there’s nothing wrong with removing their food from the coop or run during the night. All this will do is set your ducks feeding routine back to normal, and they will have a bigger meal before putting themselves to bed.

Your Coop Is Overcrowded

When your coop is overcrowded, whether it’s ducks, chickens, quails, or other poultry, the response is always the same.

Increased aggressive behaviors. This can include pecking, stress, and of course, quacking loudly. These behaviors occur more during the night as all the ducks are fighting for the preferred places to sleep, and for enough space.

This is why it’s crucial to get the right-sized coop for your flock! Be sure to also give your ducks enough space, and enough nesting boxes too!

Believe it or not, some ducks when they are lonely will actually quack more often. Perhaps to try to find company. This can be exacerbated at night as they can’t see their companions and may even feel scared.

The other response of a lonely duck can show behaviors of reservation, where they become docile, timid, and quiet. But if you have a small flock of one or two, loneliness is still a possibility when there is clear quacking at night.

Sometimes adjusting to a smaller coop can help them feel more comfortable and have them closer to their companions too!

If I was laying an egg I would certainly quack pretty loudly about it!

But really, when a female duck is laying eggs, she will often quack loudly to let others know what she’s doing.

This phenomenon is seen predominately in chickens. When they squawk loudly before and after laying an egg it’s referred to as the “egg chorus”,

So, if your ducks are laying their eggs at night, it’s normal to hear a few quacks!

They Are Simply Overly Domesticated

This is more of a general observation than a true cause of ducks quacking at night. But, in the wild a duck’s instinct is to stay quiet at night to help keep safe from any potential predators.

So, people often say your ducks (or other poultry) are simply overly domesticated when they quack or squawk loudly at night – as it goes against their natural instinct.

There’s not a lot you can do about this anyway. But it does contribute to a duck quacking at night, albeit, isn’t normally the direct cause of it.

To put a positive spin on it, at least your ducks feel safe!

They Are Just Communicating To Each Other!

Because ducks can’t see very well at night, they use their quacks to communicate to each other where they are, and what their intentions are.

Normally this wouldn’t cause your ducks to continuously quack to each other, but it certainly would explain the odd quack you might hear coming from their coop at night time!

How To Keep Your Ducks Quiet At Night 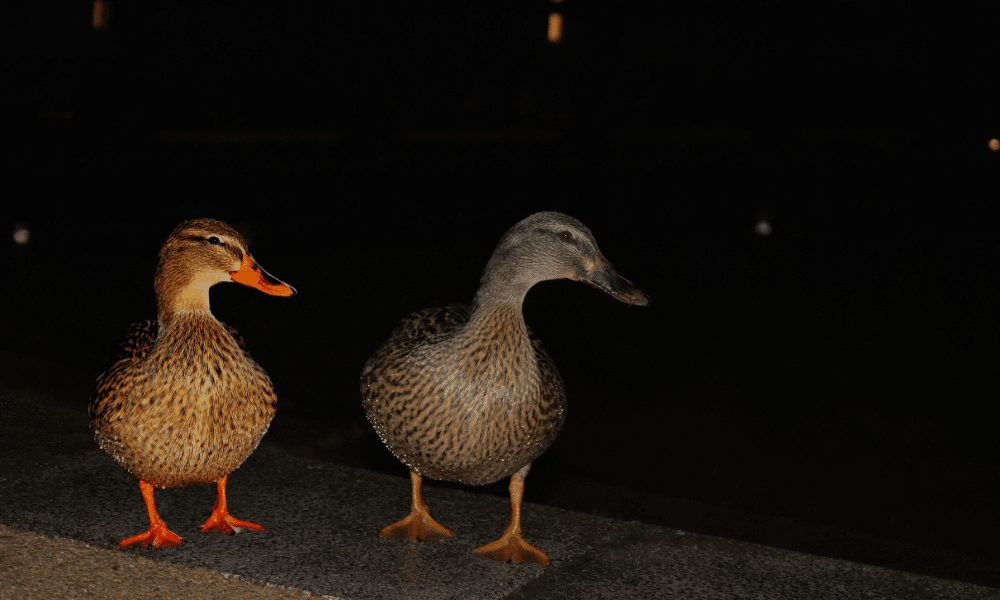 So, if things are getting out of hand and your ducks are quacking a lot at night, then I’m sure you want to find an easy solution.

Unfortunately, there’s no straight answer to this question, as every situation is slightly different!

Your best strategy is to try to determine exactly why YOUR ducks are quacking at night.

However, there are some general tactics you can use to improve the comfort of your ducks at night which are known to help them sleep through the night more soundly:

Quacks are just as complex as any other animal language. There’s so much meaning behind this verbalization.

So, why do ducks quack at night?

Well, it could be your ducks signaling danger, laying eggs, or simply communicating with one another, perhaps it’s mating season?

But, it can also be an expression of happiness, loneliness, or discomfort.

The best strategy is to try to narrow down the reasons why your ducks are quacking at night, then slowly make adjustments to the coop, flock, feed, and sleeping arrangements until things get a little quieter!