There are so many positive things you can say about EVERY chicken breed or hybrid. But, that still doesn’t mean you’re not allowed to have your favorites!

After all, if you’re looking for a chicken that will have a good temperament but also lay eggs almost daily then you’ll want one that suits your needs. Similarly, if you’re not too fussed about the daily egg production, but want a fluffy long-life companion then you’ll probably prefer other breeds.

Here we go through what the Buff Orpington chickens and ISA Brown chickens are best known for, what qualities they possess, and how to tell the difference between the two.

We know that over the ages chickens have been selectively bred to produce as many eggs as possible or to grow as fast as possible for farming purposes.

But, in more recent times, there’s a rapidly growing number of households in both urban and suburban areas that have begun raising chickens. Unlike for farming purposes, the qualities you look for in a backyard chicken lean more towards their temperament, egg-laying abilities, and overall cuteness to suit your preference.

When it comes to hybrid chickens, the Buff Orpington & ISA Browns are about as timid, friendly, and well mannered as they come. But, they differ by size, weight, egg-laying capabilities, and behaviors.

In a similar fashion, the hybrid ISA Browns were developed by Institut de Selection Animale, hence the name “ISA”, back in 1978. No one is certain on what the hybrid’s parents are, but they are known to be one of the best layers amongst chicken breeds and hybrids.

An ISA Brown is pretty much your stock-standard chicken in terms of its dimensions, shape, size, and weight. From about 4-6 pounds, of medium size, and of normal proportions for all its body parts.

It’s easier to identify an ISA Brown Hen Vs. Rooster compared to other chickens. This is because most females are a rich reddish-brown with white tail feathers, and most males are predominately white, with some brown feathers here and there.

The Buff Orpington on the other hand is of a roundish, broad, and heavy build. Roughly 6-8 pounds for females and 8-10 pounds for males.

In terms of their color, well, that depends on what type of Orpingtons you have. Classically they will either be whitish gold or fully black, but you can also get white, blue, or even the royal Jubilee Orpingtons.

Much like other chickens, to tell the difference between a male and female Orpington you’ll need to look out for the wattle and comb, as they will be much more prominent and develop much earlier in Roosters.

If you’re looking for maximizing egg production then you really can’t beat the performance of an ISA Brown hen. They were specifically created with the purpose of laying eggs in mind, laying up to 300-350 a year, and from a young age of about 4 months old, They are also of medium size and of high quality.

Buff Orpingtons are more of a dual-purpose chicken breed. Although they do have reasonable egg-laying capabilities, laying roughly 200 per year, you’ll have to wait until a little later until they’re mature enough to lay, from around 6 months old.

Unfortunately, the high-quality production rate of ISA Browns does come with its downsides. Since an ISA Brown spends all year producing eggs with little-to-no breaks, it starts facing health problems within its reproductive system.

Also, after two years, its productive abilities drop significantly. It would still produce eggs, but it won’t be as much. It’s very impressive if an ISA brown lives up to 5 years of age.

Buff Orpingtons don’t face this kind of issue. Although they lay eggs quite regularly, they are much more balanced. A Buff Orpington may start laying eggs a little later, and a little less, but will generally lay for 3+ years and remain healthy even after! It’s not unordinary for Buff Orpingtons to live 5 years or more.

If you’re a keen backyard chicken farmer and want to spend a lot of time with these amazing, quirky creatures, then the temperament of your chicken is of vital importance.

After all, you want a chicken that genuinely enjoys your company, and that you can develop a companionship with. Look, eggs are nice too, but it makes a difference if you can be around your chickens without them being skittish or getting aggressive.

Luckily, both the ISA Brown & Buff Orpington is extremely gentle, intelligent, and are more often than not in a calm state. This makes it so much easier to tend to your chicken owner duties and interact with your flock.

If you live in a colder climate where your chickens are likely to get exposed to the cold, it makes sense that you want to be extra cautious and get a cold hardy chicken.

Because of their size, Buff Orpingtons are naturally cold-hardy, more so than other smaller chicken breeds like ISA Brown or Red Rangers, etc.

How To Tell The Difference Between Buff Orpington & ISA Brown Chickens 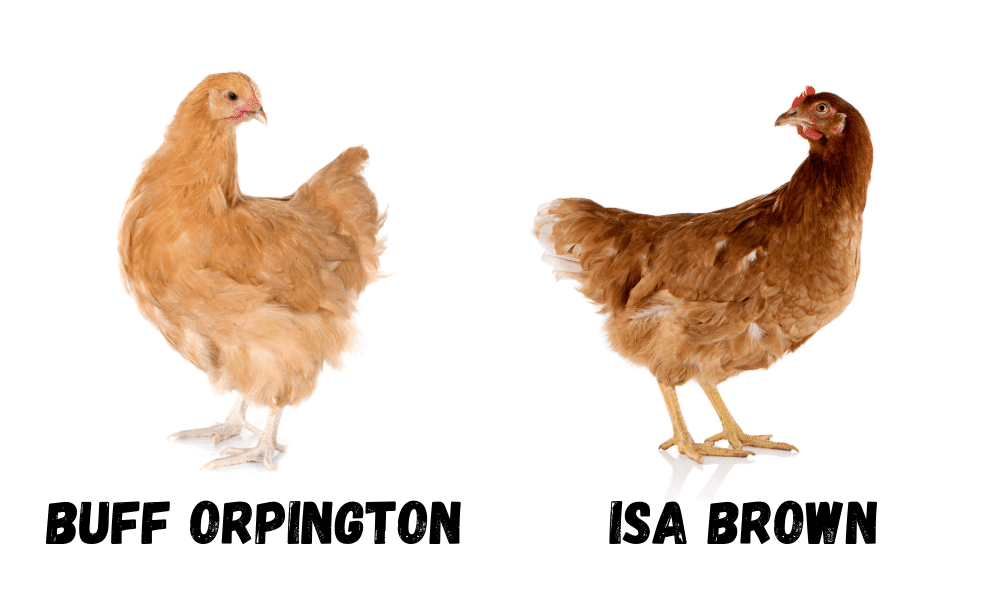 If there’s been some confusion around whether you’ve got Buff Orpingtons or ISA Browns, there are some easy ways to tell the difference between them:

Buff Orpingtons are a much larger chicken hybrid and are much more balanced in terms of what they offer as a backyard chook. However, ISA Browns are renowned as the best and most consistent egg layers amongst chicken breeds. They are also beautifully intelligent and calm creatures.

In terms of what’s better for you? Well, that’s up to what you are looking for in a backyard chicken! In all honesty, you probably can’t go wrong here!

For more chicken comparisons, check out: