These chickens have been around since the 1800s, and are still going strong in the modern backyard farm as reliable egg layers with brilliant personalities.

But, one challenge any chicken owner faces with new chicks or chickens is identifying whether they are hens or roosters.

After all, you’ll need to prepare accordingly, and some neighborhoods will not allow roosters altogether!

So, to remove any shadow of a doubt, here are all the main observable differences between Silver Laced Wyandotte hens and roosters, at an adult age and as baby chicks! 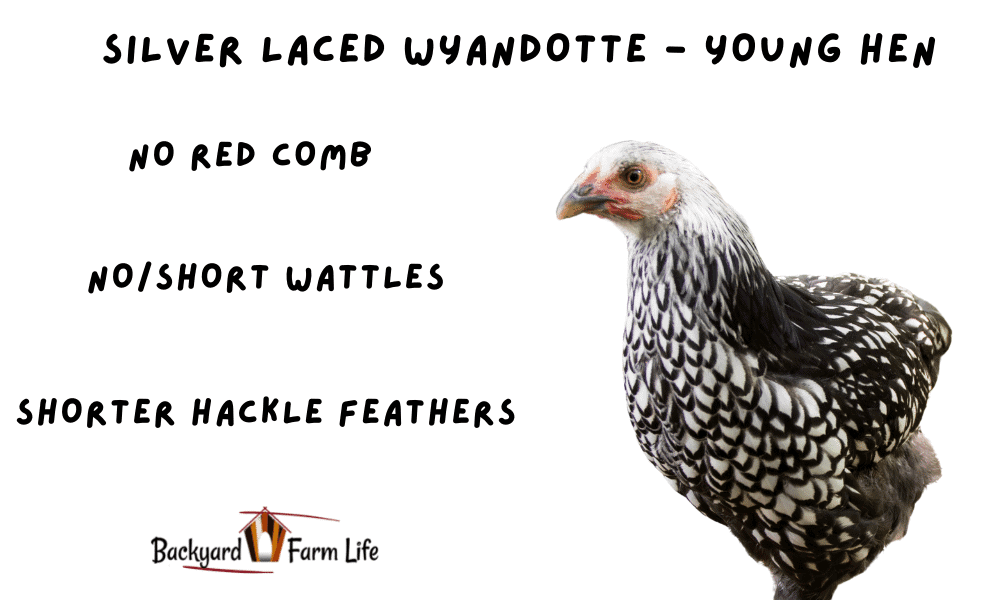 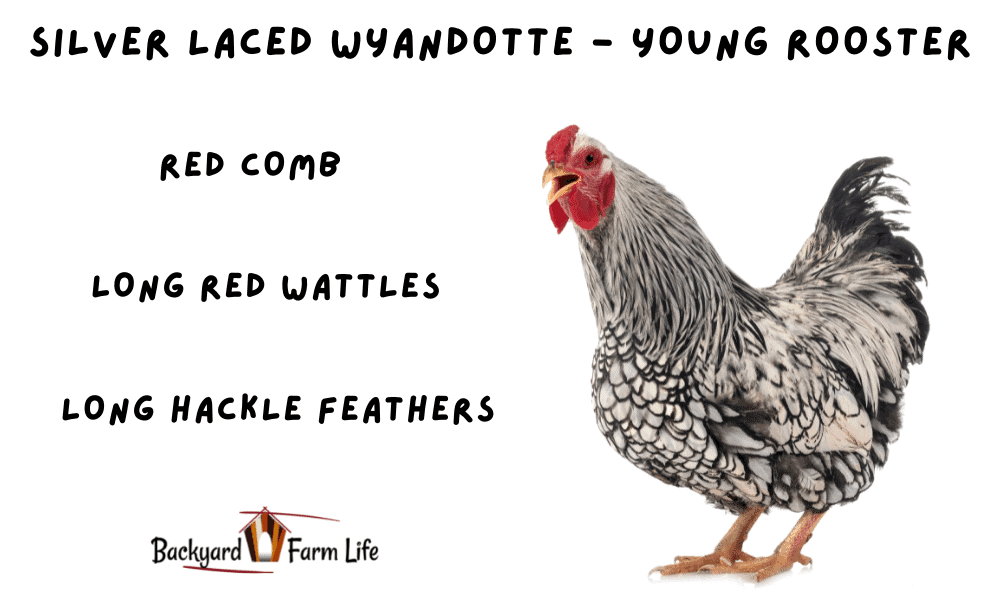 Although there are certain differences you can observe at different ages, the main differences between the Silver Laced Wyandotte hens and roosters come down to their combs, wattles, and hackle feathers.

Here’s how you can tell the Silver Laced Wyandotte hens from the roosters.

As a generalization, the Silver Laced Wyandotte is a rather big chook, compared to other standard breeds.

This is predominately due to their thick feathers and robust frames.

Though, size can still be used to differentiate between the hens and the roosters.

It’s because of their size that Wyandotte Chickens don’t tend to fly higher than about 4 feet!

Both Silver Laced Wyandotte hens and roosters are known for their striking beauty and unique plumage design.

It’s like their bodies are covered in snow-like, fluffy feathers (even other Wyandottes and Wyandotte mixes are gorgeous).

You can’t differentiate a Wyandotte hen from a Wyandotte rooster strictly on color alone, as they share the same whitish snow-like plumage, black tails, and long legs too. But, the roosters often have a stronger presence of white, especially around their hackle feathers and heads.

One of the more obvious differences between Silver Laced Wyandotte hens and roosters is the presence and size of their comb and wattles.

From about 6-10 weeks old Wyandotte roosters will be showing their red combs and the presence of red wattles on the sides of their face!

However, Wyandotte hens don’t normally start growing their combs or wattles until months later. Even then their comb and wattles are always much smaller than the roosters.

This is one of the easiest giveaways for a young rooster!

Although the color of the plumage can be very similar between the roosters and hens of Silver Laced Wyandottes, you can still tell them apart based on the prominence of their feathers.

In particular, Silver Laced Wyandotte roosters have much longer, bulkier, and pointier hackle feathers and their tail feathers are much longer. Similar in this way to Brahma hens and roosters.

The hens on the other hand have shorter, neater hackle feathers, and their tail feathers are much shorter. 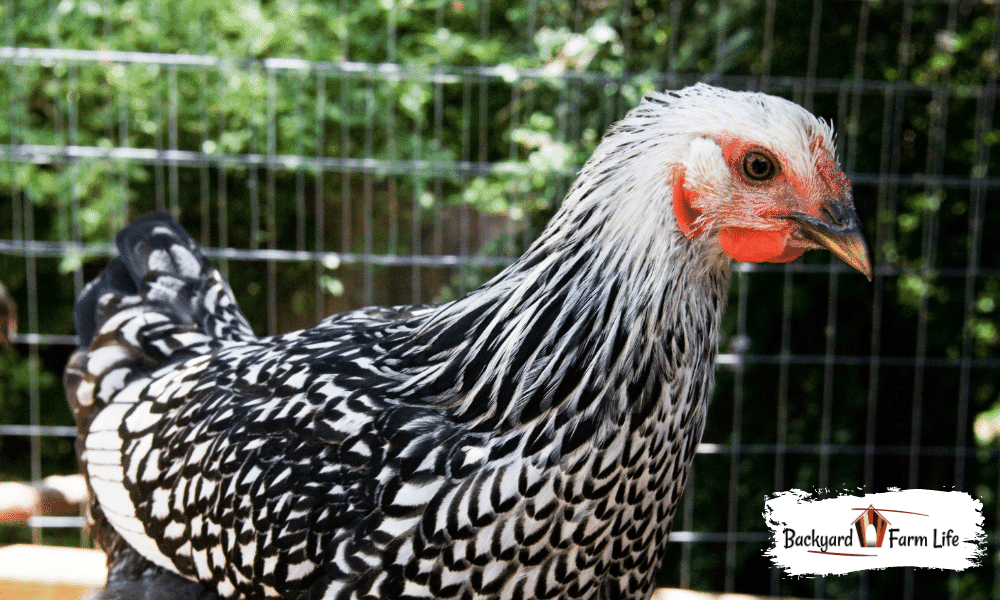 When trying to identify a young Silver Laced Wyandotte hen from a rooster, instead of just relying on physical differences, you can also look at key observable behaviors.

Both the roosters and hens are known to be pretty friendly, and very loyal backyard birds. They don’t shy away from strangers, especially if they have been hand-reared and have imprinted on humans.

Both hens and roosters can be quite strong figures in the flock too, usually at the top of the pecking order between other breeds, and can often be seen strutting their stuff!

But, one tell-tale sign of a rooster or hen, will come from observing the key behaviors of laying an egg, clear rooster crowing, or aggression and dominance over others.

Silver Laced Wyandotte hens are known to be good layers but don’t start producing their first eggs until about 18 weeks. Similar to most other breeds, see Golden Comets Vs. ISA Browns.

They will consistently lay at least 4 eggs per week, and produce light brown or cream-colored medium-sized eggs. Not as many as the best layers, but much more than some bantams like Silkie hens!

Around the same time as the hens will start laying, Silver Laced Wyandotte roosters will start crowing.

But, you may hear the young roosters (cockerels) try to find their voice from as young as 12 weeks.

Don’t be mistaken though, young hens can still squawk pretty loudly, but won’t make a habit of it, and it won’t be as pronounced as roosters’ first crows!

Silver Laced Wyandotte’s can be adorable, sweet, and loyal to their owners. But, there’s a part of both the hens and roosters that are known to be a little more aggressive than your norm.

Sure, there is plenty of love to go around, but Silver Laced Wyandotte roosters are known to challenge other animals, chickens, and at times, even other humans.

This doesn’t mean that every Silver Laced Wyandotte rooster is this way, but they do have a higher tendency for aggressive or dominating behavior than some more ‘reserved’ roosters, like a Polish rooster or Ameraucana rooster for example. 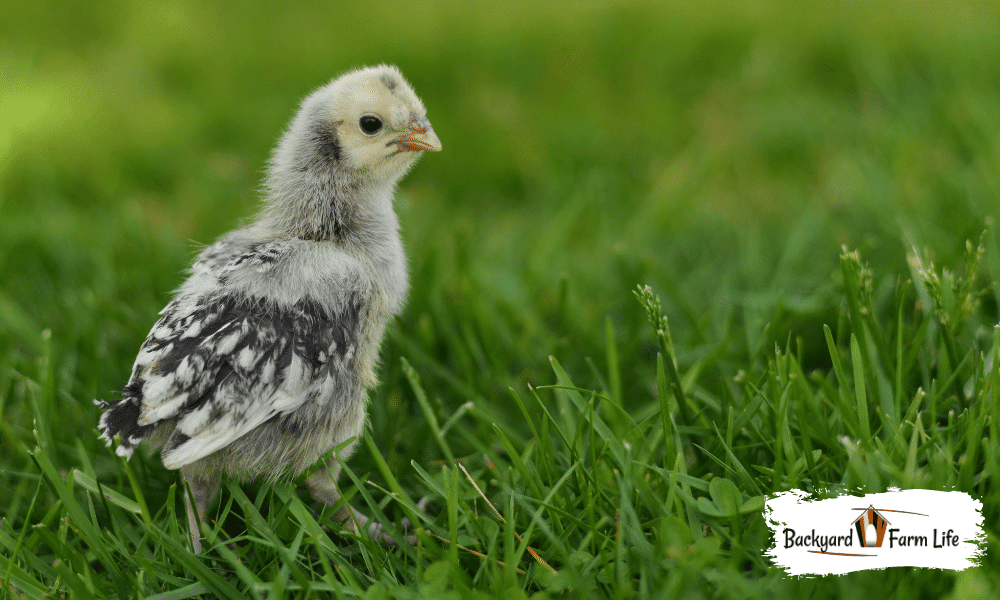 Knowing how many roosters and hens you’ve got is a crucial part of raising chickens. Especially if your neighborhood doesn’t allow for any roosters!

Unfortunately, it can be quite hard to determine the sex of a Silver Laced Wyandotte baby chick at younger ages. Even for those with experience!

However, there are some key characteristics that male baby chicks develop much earlier than female baby chicks. So, depending on the age of your baby chicks, you should be able to piece together several of the clues, and make an educated guess of what you’ve got!

Even experts which have raised countless baby chicks struggle to identify the gender of a Silver Laced Wyandotte as soon as it hatches.

Simply put, the female and male chicks don’t exhibit any different physical traits at such a young age. Plus they still have their baby feathers so you can’t use their plumage or color as an indicator either.

From 0-6 weeks, only a professional would be able to tell the difference, usually by examining the vent and wing formation.

At this point in time, you’re better off trusting your instinct and making bets with the family!

Well, you’ve waited for 6 long weeks with only instincts and gut feelings on whether you’ve got male or female Silver Laced Wyandottes.

The good news? From 6 weeks old your baby chicks will finally start showing telling signs that you have males or females.

This is because from 6-8 weeks of age, Silver Laced Wyandottes males will begin to show signs of wattles and combs, usually appearing as small red blobs on their heads and cheeks.

You see, Silver Laced Wyandotte females don’t start showing signs of wattles or combs until much later, up to about 3-4 months old!

So, by looking out for their wattles and combs, you can quickly identify young roosters from hens!

From 10-16 weeks there should be some very clear signs you’ve got yourself a Silver Laced Wyandotte hen or rooster.

Not only will the rooster’s comb and wattles be much more prominent, but their hackles will also be much thicker and longer, and they will have much longer tail feathers.

On the other hand, Silver Laced Wyandotte hens still may not show any wattles, only small red combs, and much shorter hackle and tail feathers.

These same tell-tale characteristics of roosters and hens can also be applied to other Wyandottes, like the Golden Laced Wyandotte hens or roosters too.

It’s not that hard to differentiate between a Silver Laced Wyandotte rooster or a hen at maturity. But, as young chicks, there’s always an inherent difficulty, particularly during the earlier ages.

At maturity, you can rely on observing the difference in their hackle feathers, tail feathers, and the prominence of their comb and wattles.

Aside from this, their behaviors give them away from about 16-18 weeks, when they start laying or crowing!

If you’ve been lucky enough to raise Silver Laced  Wyandotte’s but don’t know whether you’ve got roosters or hens at any age, I would be happy to help. Simply post some pictures on our Facebook page, or contact me with pictures!